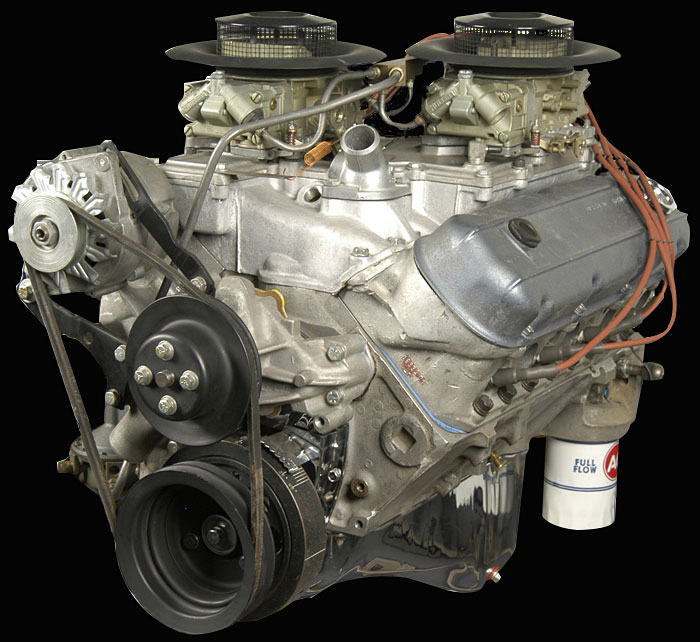 It's a rare treat indeed when hardcore engine enthusiasts get to peek deep inside vintage and prototype high performance engine packages that never made it to production. On this site we've seen the unique internals of the Chevrolet 427 Mystery Motor and other rare engines and now we have an in depth look at a one-off all aluminum canted valve, crossram inducted Chevrolet small block evaluated for the '69 Z/28.

This car has been featured multiple times in print magazines and their internet versions. All of them recognized that the engine is the single most defining component of this car, yet none of them chose to dig deep enough to bring their readers an insider's look at this rare canted valve crossram 302ci powerplant. Instead they showed pretty pictures of tail lights, Camaro and Z28 emblems, wheel caps, interior, console instruments and so on; all standard items on any 1969 Z28. What the hell were they thinking? We figure you already know what a 1969 Z28 emblem looks like so check out these photos of the guts behind the glory. 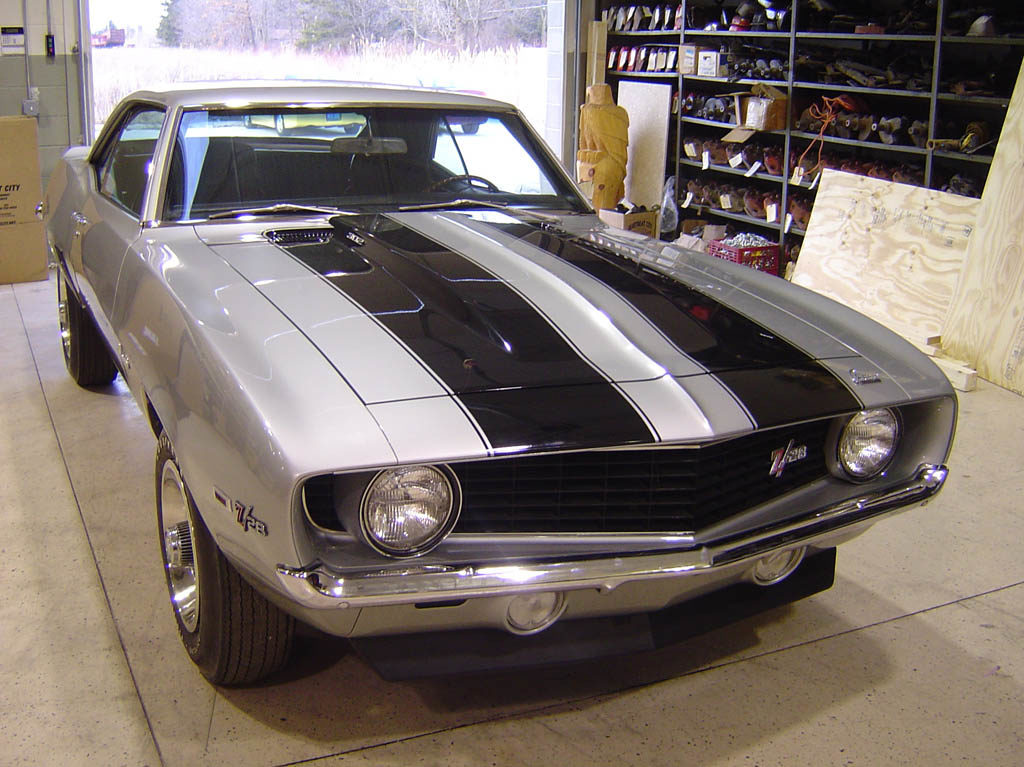 Thanks to car owner Rick George of Classic Headquarters and his friend Greg Postnieks we are granted the opportunity to show you these amazing photos of the rare canted valve, semi-hemi head 302ci small block that underwent development in 1968 to sharpen Chevrolet's edge in Trans Am racing. Rick owns the Cortez Silver '69 Camaro with this unique engine and he graciously agreed to let Greg provide these photos for your enjoyment. In checking further I recall seeing this very engine in the barn of Oldsmobile Performance engineer Bill Porterfield back in the mid-eighties. Bill recently confirmed to me that the engine then went to Al Maynard who subsequently sold it to Rick George. It is one of the few surviving examples of the canted valve Z/28 program and we believe, the only one with an aluminum cylinder block. 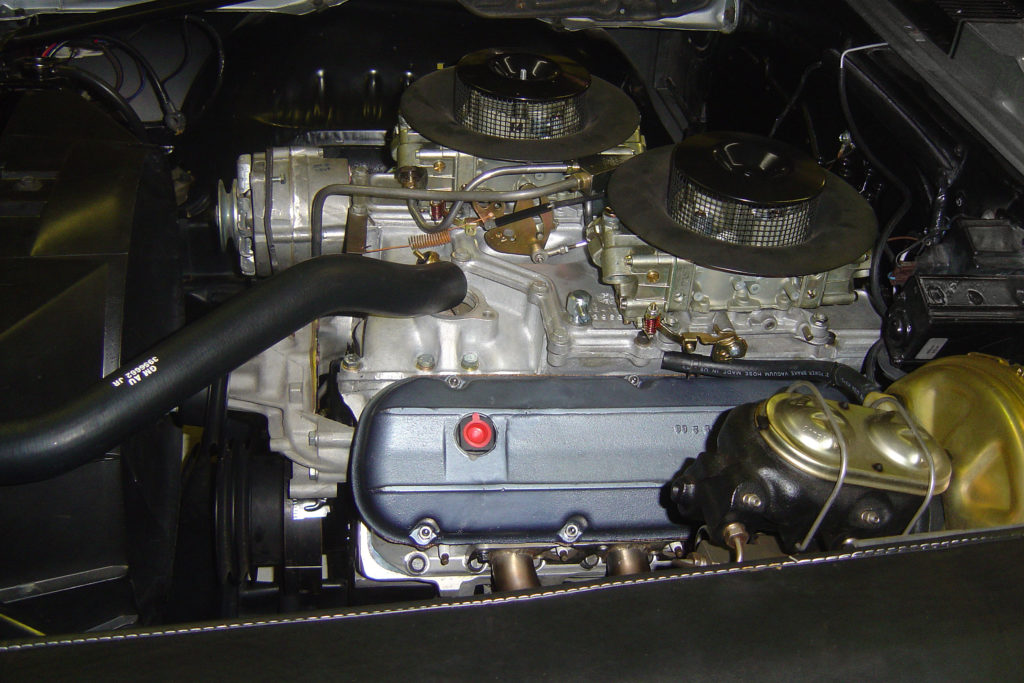 This doubly unique engine is based on an aluminum, 4-inch bore block originally developed under Zora Duntov's Corvette group. Engineer Bill Howell left the lab in 1967, but he says this engine would have been developed by the V8 group as it would have had to have production intent to be legal for the Trans Am racing series. 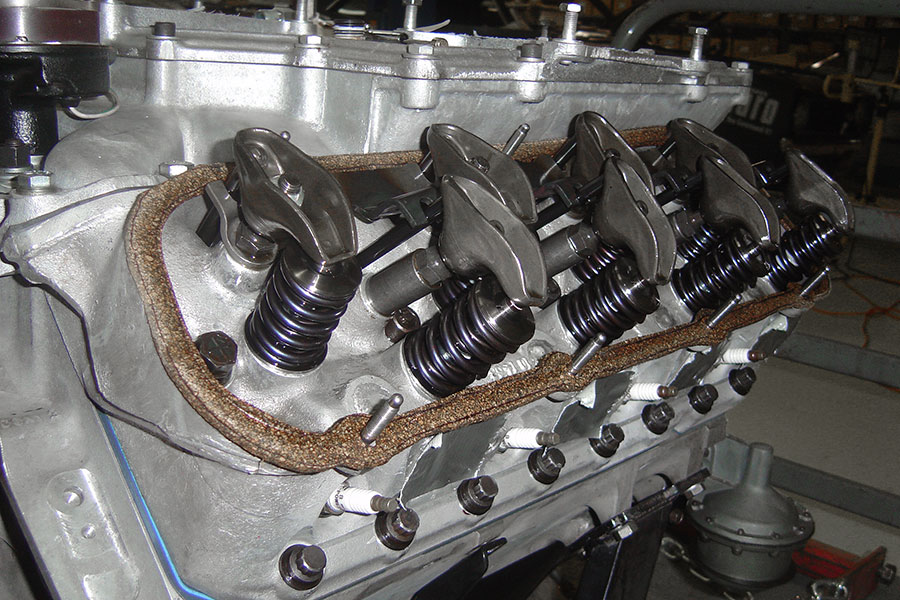 Jerry Thompson was the engineer behind the the crossram program and it bore fruit in the well known versions that fit standard small block heads. The quest for more power evolved further to all new aluminum cylinder heads  featuring canted valves, semi-hemi combustion chambers, oval intake ports and spread port configuration with individual ports on both the intake and exhaust. It has been likened to a big block Chevy due to the canted valves, but it does not have siamesed intake ports like the big block and is therefore unique to its day. Note the stamped pushrod guide plate held in place by the intake rocker studs and heavy duty springs with steel retainers. Also note the steel rocker stud extensions for the exhaust rocker arm studs.  As you will see several versions were evaluated with various chamber revisions.

Spread port, oval intake runners address a more direct path to the valve and D-shaped spread exhaust ports are shaped to match the exit angle from the combustion chambers. In this view the head takes on the distinct porcupine look of a big block head, but is much different than the eye suggests. No angle plugs here. Plug entry is straight and the plugs are gasket type.  The valve cant is really evident in the accompanying photos.

The engine is a 302ci V8 as per Trans Am rules. We have it on good authority from dyno sheets supplied by Chevrolet development engineer Bill Howell and comments from former Traco employee Gordon Chance that the basic single four barrel Trans Am engines of the Penske era averaged about 425-435 horsepower. Before you scoff, that's better than 1.4 horsepower per cubic inch with those old iron heads that were nothing to write home about.  These heads were designed to improve on that performance, but the minimal increase did not justify the expense of producing the heads hence they never made it to production. The accompanying photos show one version of the heads that could more likely be termed a twisted wedge head with a deep wedge chamber and plenty of quench area.

The development engines utilized standard iron blocks, hence this aluminum block version is a rare gem indeed. Likely an escapee from a prior Zora Duntov Corvette program, the prototype block was re-purposed in the engine lab as part of the experimental program, but never really stood any chance of making it to production. The three iron block development engines are still floating around out there and there are also some copies that have been pieced together, but this singular aluminum version reinforces the clandestine vitality of Chevrolet's (no racing policy) motorsports mentality back in the day. They weren't sitting on their hands. 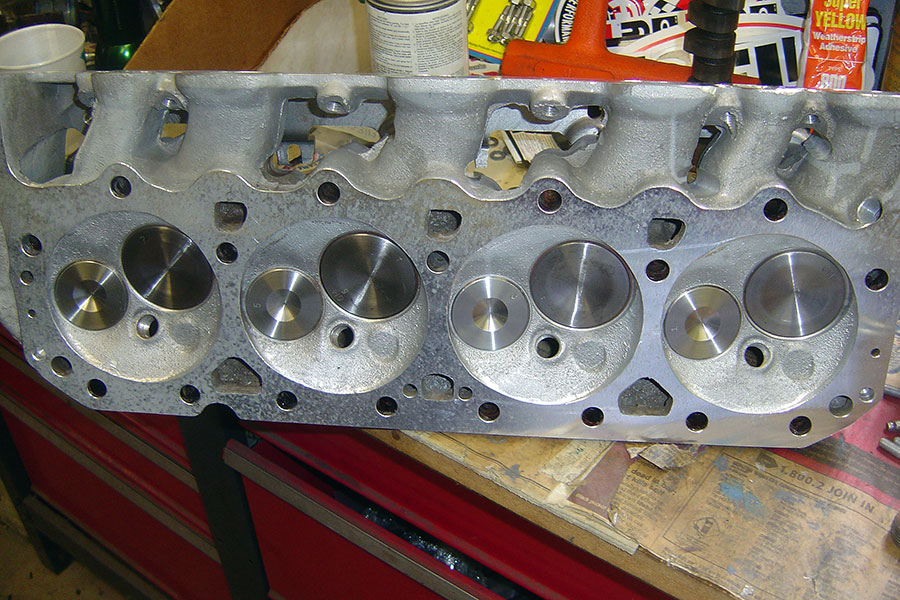 Here's another cylinder head variation with less quench and a chamber more closely resembling a hemi.  A true hemi is pretty difficult to achieve without opposed valves. These valves are rotated in relation to the bore, but still accommodate a multi-angle valve-in-line configuration. The round chamber is further defined and this head has less quench area in a shallow chamber with a more centrally located spark plug. You could call it a hemi, but maybe not since it does not conform to the opposed valve relationship with central plug and domed chamber of a true hemi. Hence the canted valve designation, but more like an open chamber big block.

From these views of the engine you can see that the cylinder heads are asymmetrical, hence they are not interchange side to side. The aluminum, but otherwise stock 4-bolt block accepts all standard accessories such as the starter, oil filter, motor mounts, water pump, mechanical fuel pump, timing cover and alternator mount. In some of the photos you'll see a standard vacuum advance aluminum distributor while another shows the current transistor ignition distributor with tach-drive. Note the block carries a zero prefix casting number indicating a prototype engineering component. 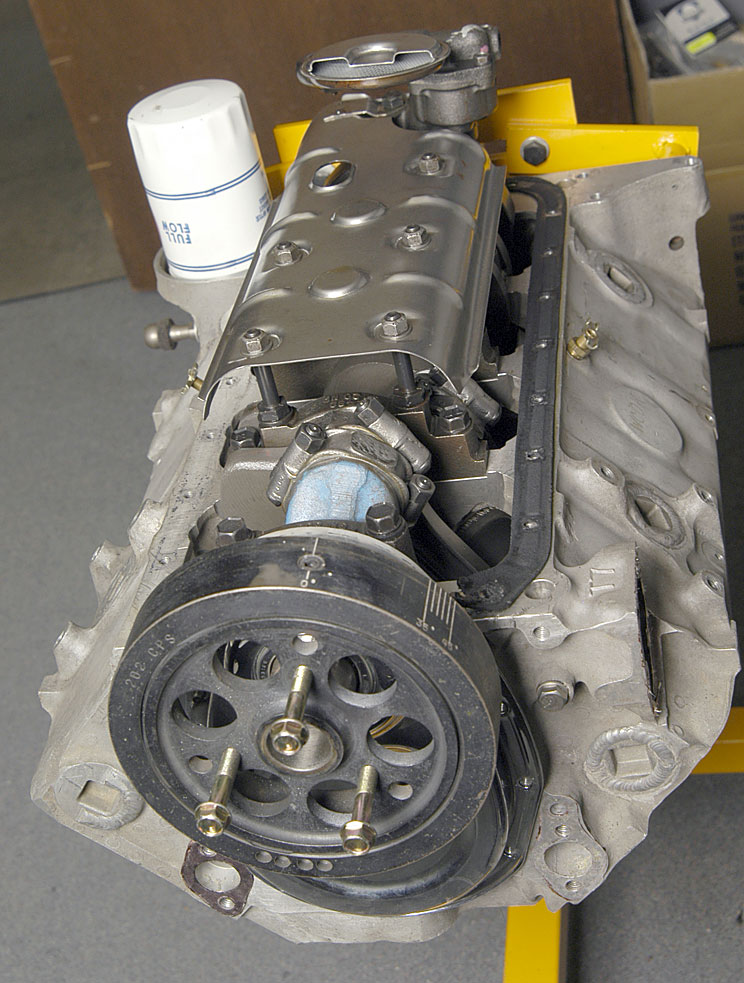 In 2006, Rick had his friend Greg Postnieks freshen the entire car at his Watkinsville, Georgia shop. When Greg disassembled the engine he photographed all the savory details of this rare piece of Chevrolet performance before sending the pieces to  Thomas Racing Engine, TRECO in Cumming, Georgia where Johnny Thomas performed a complete inspection and rebuild.  Thomas had to fabricate new intake gaskets and modify some current Fel Pro 1010 head gaskets to accomplish the build (see photos). The engine was fired up and broke in on the dyno, but Rick elected not to do any power pulls due to the rarity of the piece.

In their quest to uncover more information about the engine, Rick and Greg discovered the other cars and engines and also some varieties of the cylinder heads based on chamber configuration. While technically not a hemi cylinder head the semi-hemi designation is somewhat valid as the chamber resembles a shallow hemi shape and the spark plug is positioned closer to the center of the chamber.

Here's a closer look at the specific crossram details. The bottom of the intake is fitted with a tin oil splash shield held in place by rivets.The plenum under each carburetor is cast with directional ridges on the floor to help equalize mixture distribution. The pattern suggests that numbers 4 and 7 cylinders needed a little help. Top view shows standard Holley 4150 carburetor flanges with divots for carburetor linkage. Externally the manifold provides small clues to its special nature with easy to spot individual runners and vertical intake flange mounting bolts instead of the usual bolts that are perpendicular to the head surface (see photo, lower left). All of the crossram intakes for standard small block heads have the thermostat flange on the front facing forward. The canted valve intake has the thermostat housing on the top between the intake runners for cylinders one and three. Note the significant kink in the intake runner to the number 8 cylinder as it snakes around the distributor flange.

Among the few cars so equipped by enterprising collectors, Rick's is likely the most unique because of the aluminum engine. However impressive it is, it's still only a representation of what might have been. And that's the cool factor in itself. In today's broader terms imagine a track version, say a Z/28T for example. Rick George has given us a glimpse of something so unique and bad ass for its day that Chevrolet could have charged a premium for it and won big off the track. Sadly, they chose not to.