Memphis, TN – The popular COMP Cams® Engine Builder Duel came to the Car Craft Summer Nationals for the first time July 20th-22nd, and was received by enthusiastic crowds who were treated to some very tight competition. 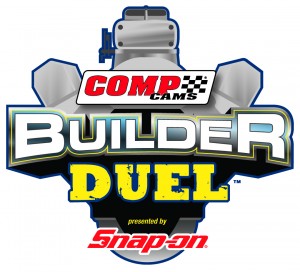 For the first time in its five-year existence, the COMP Cams® Engine Builder Duel presented by Snap-On Tools came to St. Paul, MN, and the Car Craft Summer Nationals in 2012. The Engine Builder Duel pits a pair of two-person teams against each other to see who can fully assemble and run a Small Block Chevy in the shortest amount of time. A new wrinkle in this year’s event comes in the form of the FAST™ EZ-EFI® system, which has replaced the carburetor as part of the build.

Four different competitions took place over the three days that made up the Summer Nationals. The first Duel was held on Friday afternoon, where Team COMP®, featuring Car Craft Tech Editor Jeff Smith and partner Kellie Colf, completed the build in 46:15, just one minute and 35 seconds faster than the father-son tandem of Doug and Matt Lebeis on Team RHS®. In a show of sportsmanship, the winners gave their $250 first place COMP® product certificates to Doug and Matt. On Saturday the Team RHS® duo of brothers Jason and Ray Helling turned in a blistering-fast time of 32:59 to beat out Team COMP®, made up of Charly Cropp and Joe Madison. That afternoon, Alan Wiltse and Daniel Rauch of Team COMP® completed the build in 48:15 to take the victory over Jerimiah Brockhouse and Derrick Meyer of Team RHS®.

The final build on Sunday morning saw the father-son team of Ian and Rich Rabanus on Team RHS® turn in a time of 34:43 to edge out Chris Tucker and Bob Whebbe of Team COMP®. In addition to the $250 COMP Cams® product certificates awarded to each of the first place participants, the runners-up at each build received a $125 COMP® certificate for their efforts. The next Engine Builder Duel is scheduled to take place August 2nd-5th at the NSRA Street Rod Nationals in Louisville, KY. Visit www.enginebuilderduel.com for more information and to register.

Founded in 1976 and based in Memphis, TN, COMP Cams® has become the automotive performance aftermarket’s “Absolute Leader in Valve Train Technology.” With an ISO 9001:2008 Certification, our mission is to produce the highest performing products possible, provide superior customer service and lead the industry in technological development.