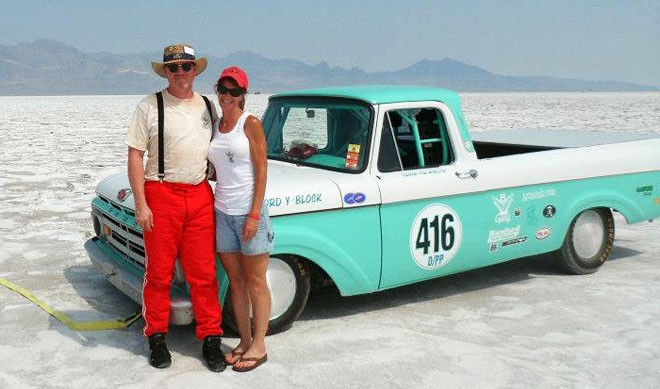 Hardcore hot rodders are all around us, quietly going about the business of building fast and furious machinery for nothing more than their own enjoyment and in some cases a shot at a class speed record buried in a rulebook. While 450 mph streamliners and 300 mph roadsters garner all the attention at Bonneville, other racers just as dedicated to their craft toil in silence pursuing personal goals with just as much meaning. And we got news! They're often having far more fun. 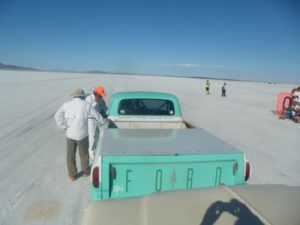 Tim and Kathy McMaster have been pursuing the D/ Production Pickup record at Bonneville and the dry lakes at El Mirage since 2010 and its been an uphill battle all the way. The reason they're called records is because they're very had to break. The biggest challenge for Tim is chasing a 164+ mph record set by much more modern machinery with a 51 year old truck powered by an old school Y-block engine that doesn't benefit from all the latest engine technology. Hot rodders like Tim relish the challenge of taking something out of the mainstream and rubbing on it until it really flies. And that's the interesting part for our readers who are diehard engine fans.

In Tim's own words, "2011 Bonneville Nationals "Speed Week" was a testing year for "Jake" the LSR Unibody."  The truck ran a best of 127 mph  using only a .060-over 292 with a set of ported and polished ECZ-G heads with 2.02” in. and 1.6” ex. valves breathing through an extrude honed Blue Thunder intake manifold. For 2012 a fresh block was punched .080” over to achieve 304 cubic inches. Tim used  a set of “H” beam rods that are 2.124” on the big end, .912” on the bushed small end, and 6.312” long. With the bearings installed that calls for a 2.0” rod journal. The Wiseco pistons used an 18cc dome that yielded a 13.4:1 compression ratio with the 69cc combustion chambers on a milled set of #113 casting number factory heads. With this combination the truck advanced up into the low 140 mph range and Tim could sense the Y-block's potential. 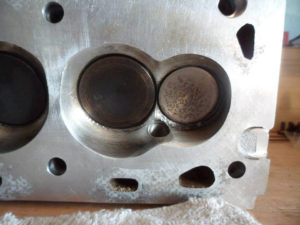 For 2013 the biggest challenge was to get more air through the motor and that was accomplished by stepping up to a set of  aluminum Y-block cylinder heads from John Mummert's ford-y-block.com. Tim selected a set of CNC ported castings equipped with 1.94/1.54-inch valves and conical "beehive" valve springs (see specs). Seeking a compression ratio of 14:1, Tim had to build a completely new short block to work with the combustion chambers on the aluminum heads. New pistons with 18cc domes were ordered and he found some used NASCAR rods with the Honda 1.888-inch journal size on ebay. 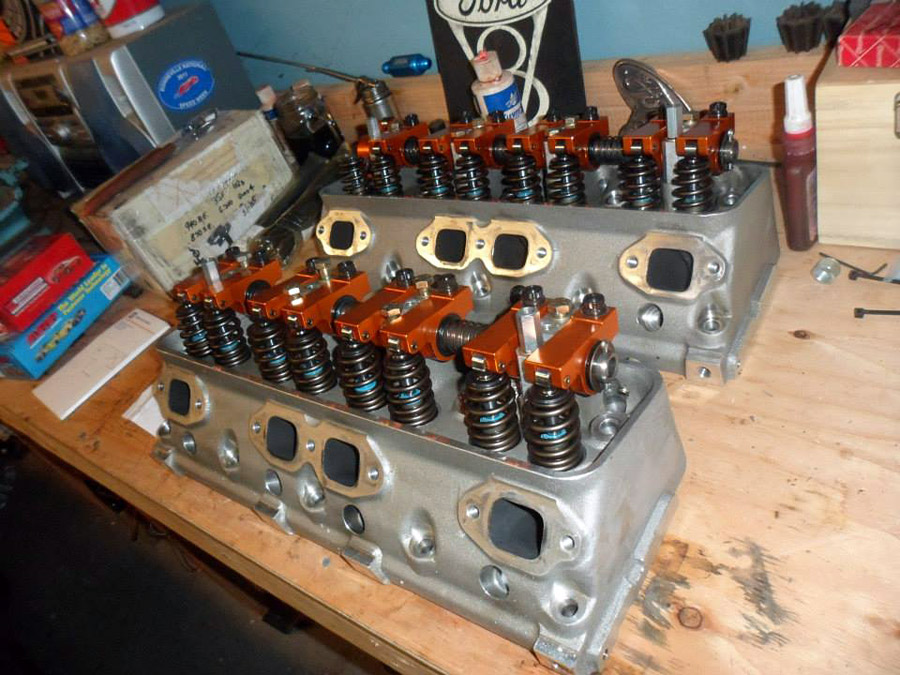 Elaborating on the the crank modifications Tim explained, "Since I had to grind the crank down from 2.188" I decided to use an old 239 crank I had with a 3.1" stroke then offset grind to the 292 stroke of 3.3", really for no other reason than to use one of the many 239 cranks I have laying around. This also gave me the opportunity to "Index" the crank so all journals are exactly 90 degrees from each other. Factory cranks are very rarely ground right on the money 90 degrees journal to journal" As Tim suggests, it doesn't make much sense to spend time blueprinting an engine and squaring the decks if the crank isn't properly indexed. 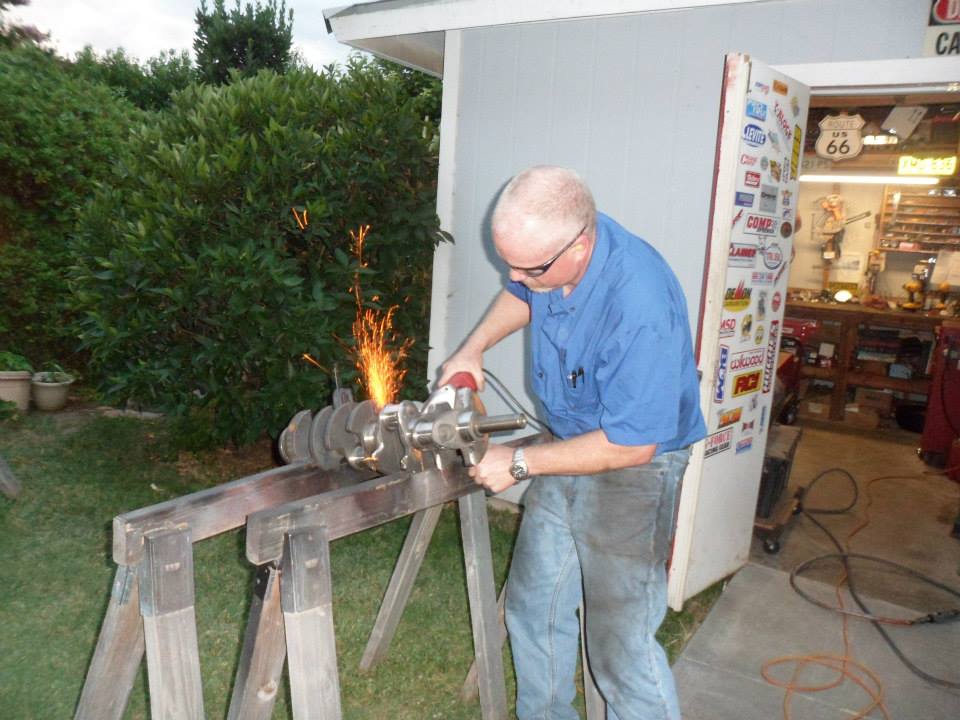 "Next with the crank I took an electric angle grinder and proceeded to grind away at the counter weights to "Knife edge" them. After that I chucked it up in the lathe and cut the outside diameter down.  All this worked well as the rods and pistons were going to be very light compared to the stock stuff so in balancing I would be removing a lot of material anyway. Special pistons were ordered from Diamond through Ted Eaton since he has done work with the aluminum heads and had a model already made up.  I was however the first to get this particular design as I wanted a lot of dome to get the compression where I wanted it." See the accompanying shots of Tim's crank modifications.

As noted above the crank was cut down, indexed and ground for the smaller 1.88-inch Honda bearings. As seen in the photos above all the basic preparation steps were applied to the cylinder block. The cylinders were bored and torque plate honed, the main saddles were align honed and the decks were squared equal distant from the crank centerline. Then multiple checks were made with the head on and off to double check piston to valve clearance, quench height and valve train geometry.

"Assembly was pretty straight forward", Tim remarked. "Just check and double check clearances to be sure nothing came together that shouldn't.  I'm a big proponent of degreeing  the cam to get the timing exact and this was no exception. The cam was pretty much the same as last years engine but ground on 112* centers instead of 110* centers. (lift .388" in and .408" ex  262* duration @ .050")  I also had a set of Harmon Collins aluminum roller tip rockers this year with a 1.6 ratio so I got a little more lift over the 1.54 rockers from last year.

The crank was balanced to .05 grams. It is held in by stock cast main caps with ARP studs meant for an FE ford.  All bearings are Clevite.  The pistons went in with no problems and were flush with the deck on both sides as I had planned with the squaring of the block and the index grinding of the crank.  Heads are held on with 7/16" ARP studs and had no clearance issues.  The one problem I had to get used to at first with the heads was valve lash.  Aluminum expands quite a bit more than cast iron so after playing with it a while I found that I had to set the lash very tight cold as the head expansion would add about .010" to the lash." 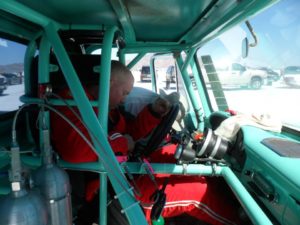 By now it should be pretty clear that Tim knows his way around performance engines and engine building equipment; so much so that he's not afraid to take a body grinder to a crankshaft and re-fashion a piece of automotive art that spins to 7000 rpm and sings that old sweet song. We asked Tim how he feels about the performance of his new motor. 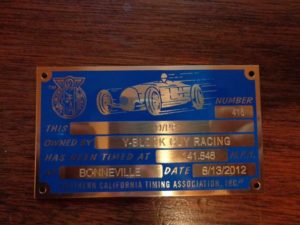 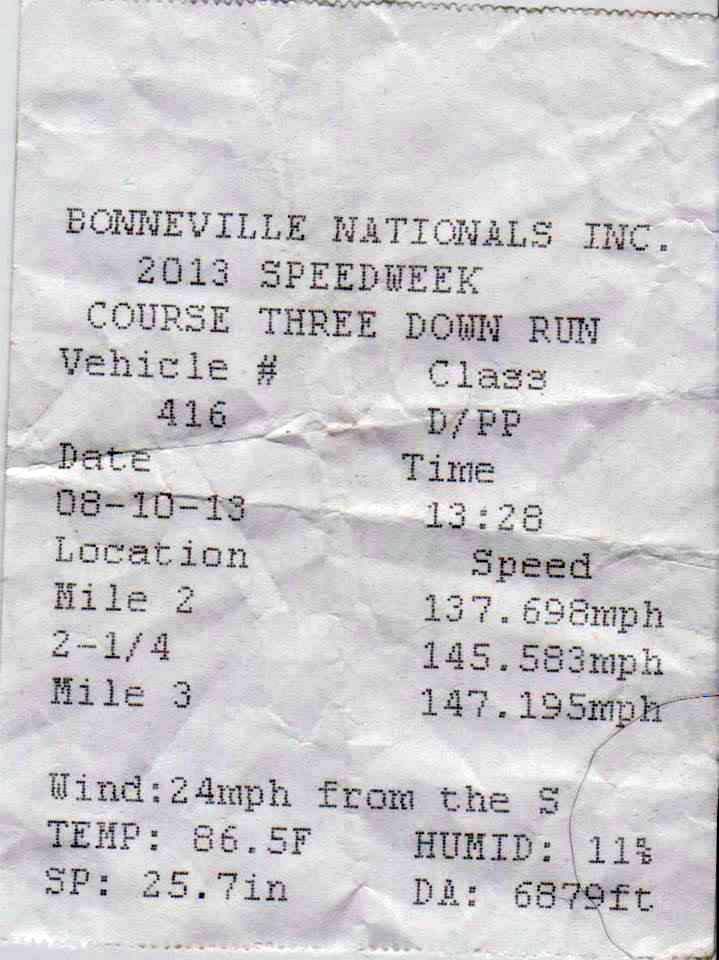 BIG thanks to Todd Jolliff for doing suspension work, John Garner my cage builder, Lewis Milinich for the wonderful paint work that he never charged me for and my mentor Charlie Burns who got me addicted to Land Speed Racing with his '57 "Flying Yellow Brick"  http://www.myrideisme.com/Blog/speed-week-2010-y-block-fridge-cab-race-truck/  There's many others and Tim has expressed his gratitude to all of them. Trent Knight and Tony Huntimer who are the best at strapping me in, Lance Hampton who does my t-shirts and all my graphics (he also comes out to the salt to help. We've been friends since we were 15 years old and I only get to see him once a year now at Bonneville. And of course Kathy my best friend who always helps and encourages me.

Be sure to check out Tim's web site at:  http://www.yblockguy.com/
It's packed with detailed Y-block information including specs and details of all Y-block V8s. If you need help with your Y-block, Tim's your man.

Sponsors Note: Tim and Kathy and Jake have been offered free room, board and travel to Lake Gairder for Aussie Speed Week if they can get the truck from the U.S. to Melbourne. Interested sponsors can contact Tim at: tim@yblockguy.com

To learn more about Tim and Kathy's Bonneville experiences and see a construction sequence of  "Jake" check out the following videos and links.

Firing Up the Aluminum Headed Y-Block