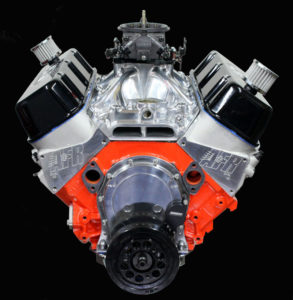 Everybody appreciates the big power and solid grunt of a big block Chevy. And why not? They're easy to build and they always make great power. Parts are plentiful and the selection of hardcore performance gear is almost overwhelming. You can throw just about any combination of parts at a big block Chevy and make extraordinary power. If you modify your approach and choose wisely, you can build a pump gas, all motor WMD that will shred the tires off of just about anything. 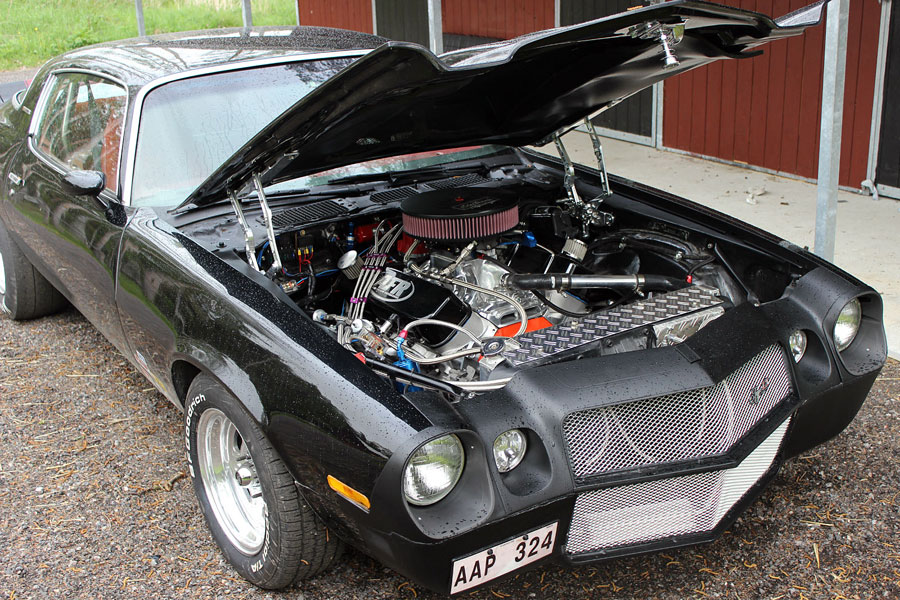 In 1999 Hardcore Horsepower’s Mike Petralia built a 556ci pump gas big block Chevy street Rat for Hot Rod magazine. First time on the dyno it peaked with 790hp @ 6,700 RPM and 656tq @ 5,700 RPM. A few months later he upgraded that Rat with a bigger cam and some head work and cranked out 821hp and 673tq. This was a genuine 820hp BBC that ran on pump gas. But as years passed he often wished he could've made more torque with less RPM because real street cars shouldn't need to rev above 6,500rpm.

Mike was sure that what kept him from achieving his high-torque, low-rpm goals, without resorting to boost, was the lack of a capable cylinder head. That 556ci BBC ran a set of aftermarket R-port aluminum heads which were pretty much considered state of the art at the time. It took another decade and a half for the performance aftermarket to produce a head that would deliver the best combined street manners and performance. This bugged him for years until finally a head that could move huge amounts of air on the low end and still pull respectably to 6,000+ rpm arrived. He discovered it in the new Air Flow Research 300cc Oval-port Magnum V2.

When an opportunity arose to address this known problem he set out to build 700hp & 700tq in a real-world street motor destined to twist a customer's 2nd GEN Camaro all around the back roads of Sweden. That meant no high revs, no boost, no water/Meth injection, and no race gas! And he was determined to do it with nothing but off-the-shelf parts, (that means no modifications to any parts), and with less cubic inches than his old 556ci engine although not by much. Since 540ci has become the current go-to displacement for easy to build BBC strokers, he decided to go that route.

When you first look at the flow figures for AFR's 300cc O-port heads (388cfm @.700" lift intake, 297cfm exhaust), it looks similar to some of the bigger R-port heads that are currently available. But Mike saw it in a different light. He saw its smaller intake runner volume, 300cc vs. 340cc+ for some of the R-port heads, as a way to build low-end torque. AFR's extremely efficient 115cc chamber plus Wiseco's 15cc dome pistons plus Fel-Pro 10.3cc bore head gasket equates to a still pump gas friendly 10.94:1 compression ratio teamed with intake port dimensions favorable to producing GOBS OF LOW-END TORQUE!

The new AFR cylinder heads are the central component of this remarkable piece; a real world engine designed to deliver off the hook performance without expensive power adders and in the face of fluctuating fuel quality. A motor specifically configured to generate massive detonation free cylinder pressure at street engine speeds without distress and with total reliability. AFR’s oval port heads makes good on the mathematical promise of superior performance generated by optimum port dimensions that generate the desired airspeed and increased intake ramming while promoting good mixture quality to support the best possible burn characteristics. When set atop a suitably strong short block assembly they rock the power curve like nobody’s business.

The core was easy. A Dart Big M block was the natural choice. A lot of customers want billet main caps and studs, but truthfully, for the RPM range and usage of this engine, Dart's standard ductile iron main caps and bolts are fully capable. Plus, the money saved here can be put into other areas of the engine instead. The Dart block is renowned for its superior durability and in this case it might even be considered overkill, but Mike's experience saw it as rock solid insurance.

The rotating assembly is fortified with a 4.250-inch Scat 4340 crank coupled with Scat 6.385 inch H-beam bushed rods and Wiseco's 4032 forged pistons ringed with Wiseco low friction file-fit rings, the assembly spins with King Alecular Silicon main and rod bearings. These are all top quality pieces and well worth the cost for the reliability and performance they provide. The pistons are installed .004" below deck to achieve the desired piston to head clearance and proper quench. 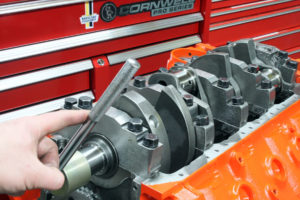 "After torquing the mains, we "feel" for any binding at the crank. Ideally, we can rotate the crank 360-deg using just one fingertip. We also check the amount of torque it takes to turn the crank after each piston is installed." Mike cautions against running excessive clearances because you think you need them. Stabilizing the rotating assembly is more important.

The cylinder heads are fitted with a 1.7:1 ratio Jesel Sportsman BBC shaft rocker setup. This kit offer the ability to adjust rocker arm placement for optimum positioning over the valve stem. Note the lower right photo shows the exhaust rocker out of alignment with the valve. The adjacent photo shows the rocker properly aligned after adjustment. The photo above shows the witness mark on the tip of the valve stem indicating roller tip contact. Notice the missing rocker stand link in that photo. Mike leaves it off when checking pushrod length/geometry so he can "sweep" the rocker arm by hand to make this mark across the valve tip.

Jesel includes 8 hardened steel shims (top left) that are used to hold the rocker stand link up so it doesn't slip down over the small-diameter exhaust rocker stud bosses. He applies some assembly lube to keep the shim in place before bolting the rocker stand link on. Even though the Jesel kit includes the rocker stand locating links, they're not extremely precise, allowing for quite a bit of valve tip misalignment as shown. With the rocker arm in place, the stands are held in alignment with large adjustable wrench when torquing them to final specs.


As a final check for the rocker ratio, the actual valve lift is checked on every valve. Mr. Gasket Co. # 107 intake gaskets fit the AFR O-ports perfectly, without any trimming. If the manifold ports are matched correctly this precision fit is worth power because it eliminates a disruption in the airflow path and maintains the optimum cross section without an abrupt area change.


"We set up the MSD distributor's advance curve with the "Silver" advance stop bushing and "Light Blue" springs before installing it. Since our Comp Cams solid roller stick is billet steel, a stock gear won't work and we don't like using bronze gears in street engines. Lunati makes this Nitrided gear that's compatible with the cam and won't wear out."


A Holley 950 cfm, Ultra HP Race 4150, carburetor with Race Calibration easily served the fueling demands of this 540ci BBC at the 700 HP level. We also tried a few different carb spacers. The engine made a little more peak power using this HVH 2.0" "Super Sucker", but power was not far off without any spacer if you don't have the hood clearance. 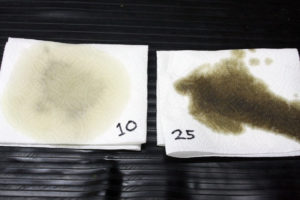 Here's a shot of a few drops of Joe Gibb's Driven BR15W-50 break-in oil drained from the oil pan after 10 full-throttle dyno runs, (left), and then after 15 more full-throttle dyno runs, (right). Notice how the oil's doing its job removing combustion contaminants from the engine (the reason it's darker). All new engines get fresh oil after the first 25 pulls on our dyno, and we cut open the oil filters to inspect for any debris. This motor's filter checked out ok.

Click each image below to see dyno figures and the power curve.

Cick here to open a PDF of the build sheet. 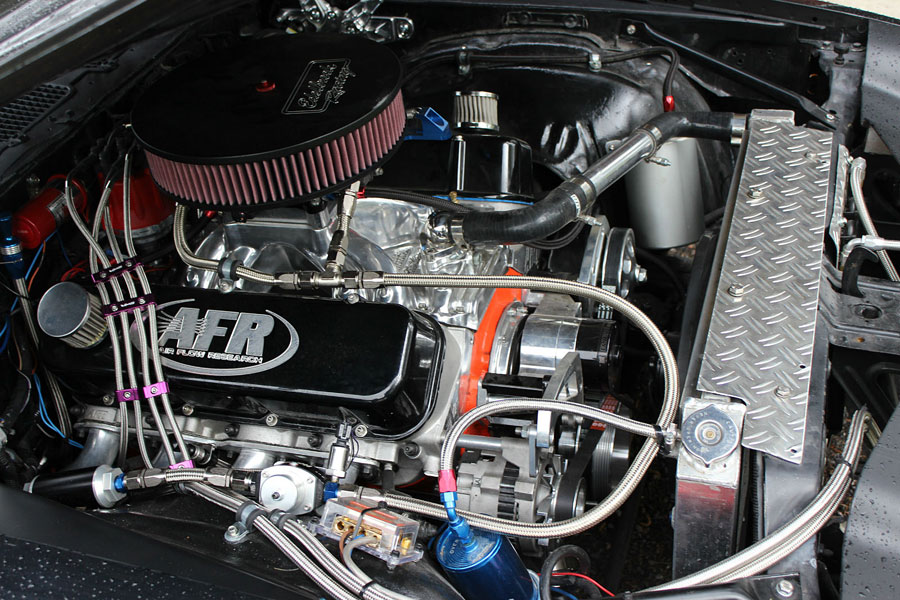 And here's that bad boy installed in Magnus Jern's 2nd Gen Camaro ready to terrorize the roads in Sweden. This kind of torque and power on pump gas is pretty bad ass anywhere in the world, especially in a nice looking ride like this one. Magnus looks pretty pleased with the results. Well done fellas. 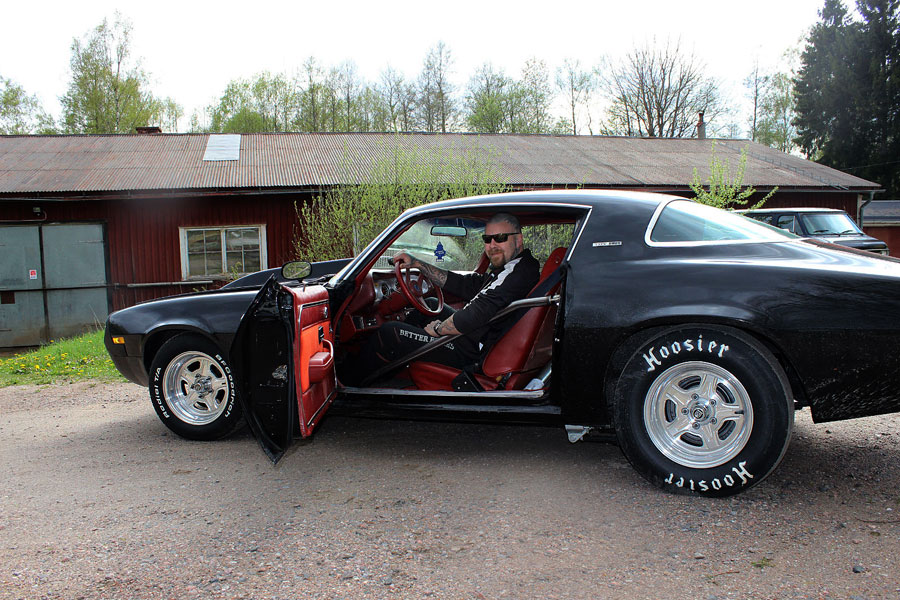