Hardcore Horsepower & Dyno in Franklin, TN have been building different street, strip, & even off-road small-block Ford Windsors for years. But that never stopped them from looking to build something different. So this engine was a new attempt at a potent, normally aspirated small-block built exclusively for the drag strip, (although we won't deny that it'll probably see some late-night street action too). They didn't want to build just another 427ci like so many others already out there. So while researching Windsor parts, they came across a set of pistons in the JE Racing catalog that had all the specs needed to build this one a little bit bigger, & maybe a little better. 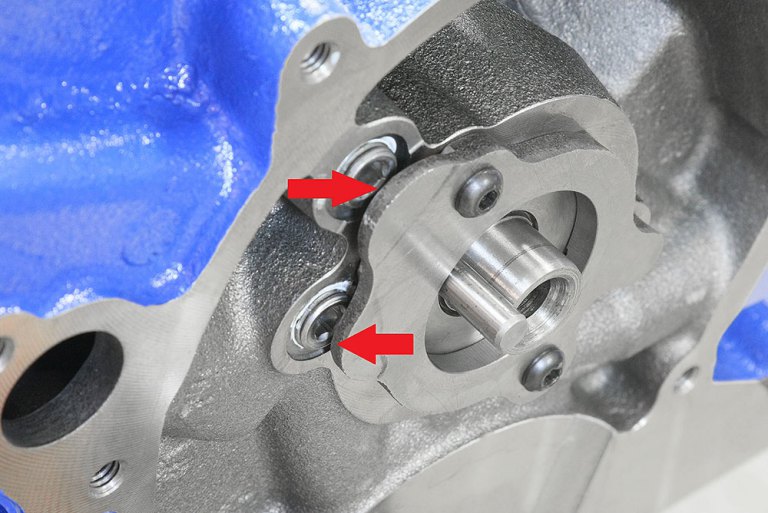 Dart blocks do not include a cam retainer plate or bolts. The oil galley plugs typically stick out too far for the plate to seat properly so you have two choices; tap the pipe threads deeper, or mill the plate's back-side to clear, as Petralia did.

Hardcore Horsepower & Dyno's owner, Mike Petralia, knew he wanted this engine to have high compression, so a dome-top piston forging was the ticket. And in order build it bigger this time, he planned to run a 4.100-inch stroke 4340-forged steel Scat crankshaft. Combined with the 4.125-inch bore Dart SHP block, that makes 438ci. The longer stroke also required long rods, so Scat 6.200-inch 4340-forged steel H-beam small-block Chevy rods with ARP2000 rod bolt upgrade were run. Yes, you read that correctly, this engine uses Chevy rods because the Scat crank features 2.100-inch diameter journals with the correct width for Chevy rods, making rod selection much more plentiful. The Scat crank was also lightened a bit by contouring the counterweights, which shaved a few pounds off the rotating assembly. 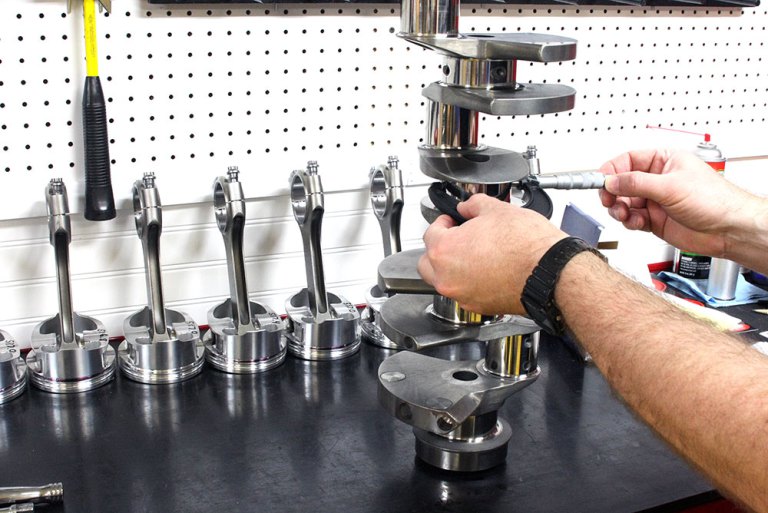 Scat forged crank and H-Beam rods are measured and cataloged for future reference. Scat components are favored for many builds because of their quality and durability. 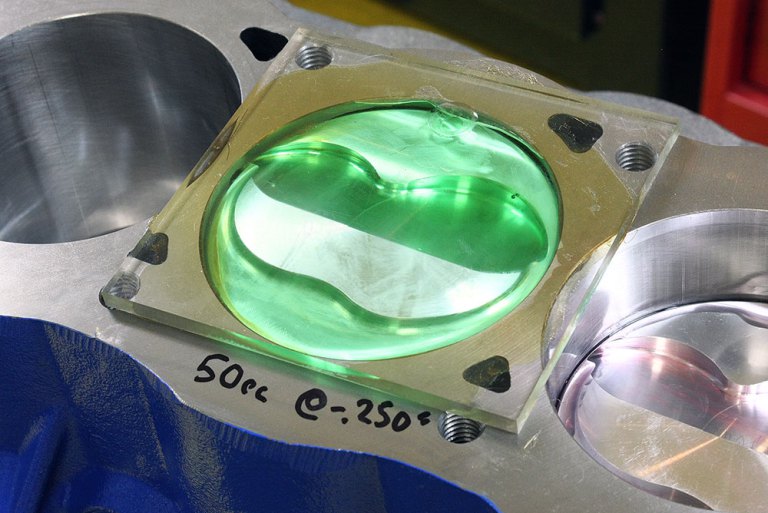 JE Racing forged pistons measured 50cc @ -.250" below deck, which calculates out to a +4.7cc dome volume. The JE pistons catalog listed them @ +6.5cc. The lost volume is in the crevice area above the top rings. 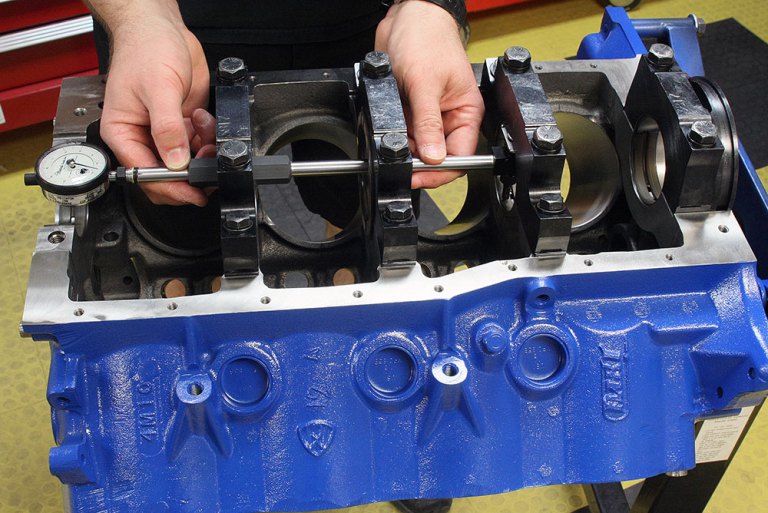 After micc'ing the crank journals, Hardcore's crew measures for bearing clearance in the Dart SHP block and logs those numbers too.

2618-forged aluminum drag race pistons were found in the "Dart/SVO Big Bore Dome"section of the JE Racing catalog feature an advertised +6.5cc dome, 1/16-1/16-3/16-inch ring lands, and a .927-inch pin bore to accept the aforementioned small-block Chevy rods. The other important factor to these pistons was their 1.230-inch compression height (measured from the flat portion of the piston's surface to the pin bore centerline). That comp height meant that if the Dart block was milled down to 9.480-inch deck height, the pistons would be very close to a true, "zero", deck, which is great for N/A power. Total Seal "Maxseal" piston rings seal the deal. The file-fit rings feature a Ductile-Iron gapless top ring, 1-peice Napier-style 2nd ring, and reduced-tension oil scrapers that'll work well with the planned GZ Motorsports vacuum pump. 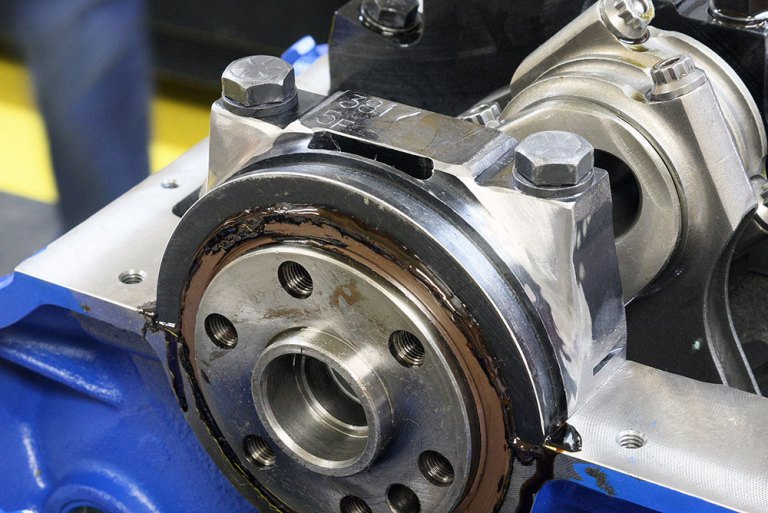 The Dart billet rear main cap pushed the Milodon oil pan too far back, so the cap was pulled and clearance ground on both sides near the main bolts. You can also see the tacky non-hardening sealer used to hold the RMS in place. It's messy, but it works.

Next choice was the induction package. Since they wanted to stay true "Windsor" with this build, that left fewer options for making really big power, like the power that can be made swapping "Cleveland"-style heads. While researching the current market, they chose a set of CNC-ported Trick Flow "High Port" aluminum castings. The in-line valve, "Wedge"-style heads offer enough airflow to support 700hp+ right out of the box. The TFS heads were specifically engineered to work best on large cubic-inch race engines, or on smaller engines running lots of nitrous or boost. Raised exhaust runners and 240cc intake runners with reshaped entries are finished off with high-resolution CNC-porting for maximum flow and velocity. The heads were flat-milled from their original 67cc combustion chambers down to 62cc to make very close to 14:1 compression in the 438. 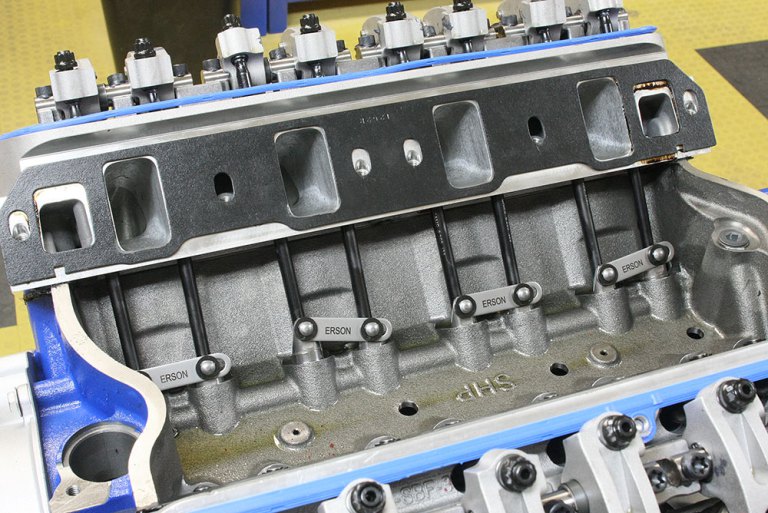 The TFS heads' as-delivered valve spring assemblies, while pretty good with a 460-lbs/in rate and up to .750-inch max lift, were felt to be not quite up to the task of controlling the pretty wild lobes of the Comp bumpstick, so Hardcore swapped them out for a stiffer 640 lbs/in rate valve spring from Crower. This would provide better valvetrain stability at higher rpms considering the large 2.10-inch intake valves and the faster acting 1.7:1 Jesel shaft rockers used. The new springs had a larger outer diameter, which caused interference with the 6-point ARP head stud nuts, so smaller 12-point ARP nuts were torqued on a 8 of the head studs to allow a socket to fit. 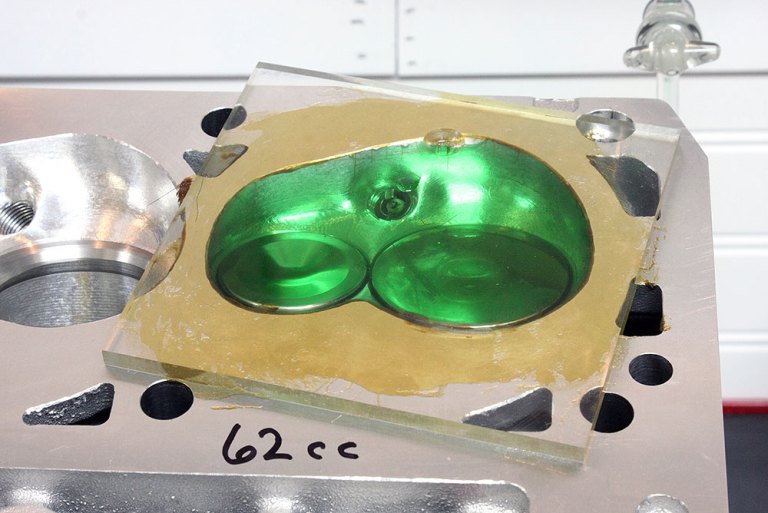 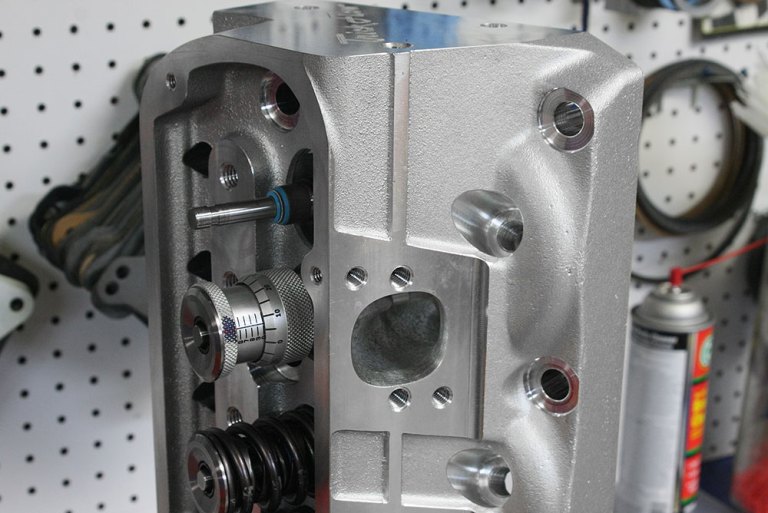 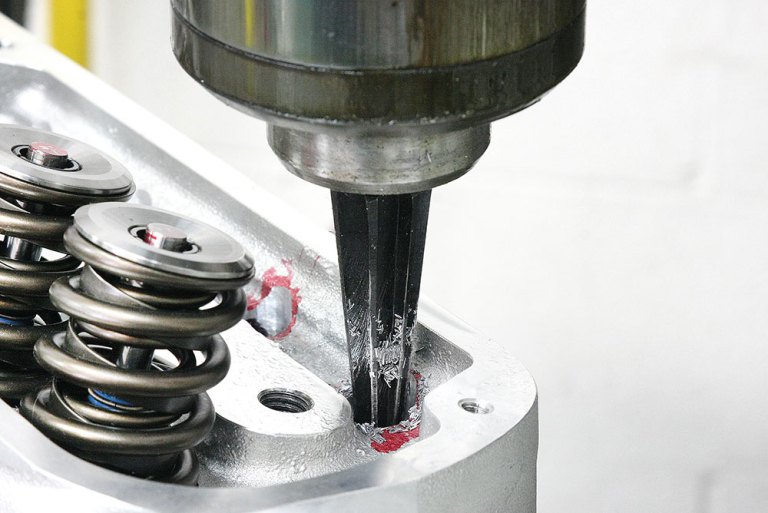 The TFS heads' pushrod holes would normally have enough clearance for stock 5/16-inch diameter pushrods and 1.6:1 ratio rockers. But they needed extra clearancing for the larger Comp Cams 3/8-inch sticks and 1.7:1 ratio Jesel shaft rockers. The extra space needed was milled using a tapered reamer since the interference was only at the top of the bore. 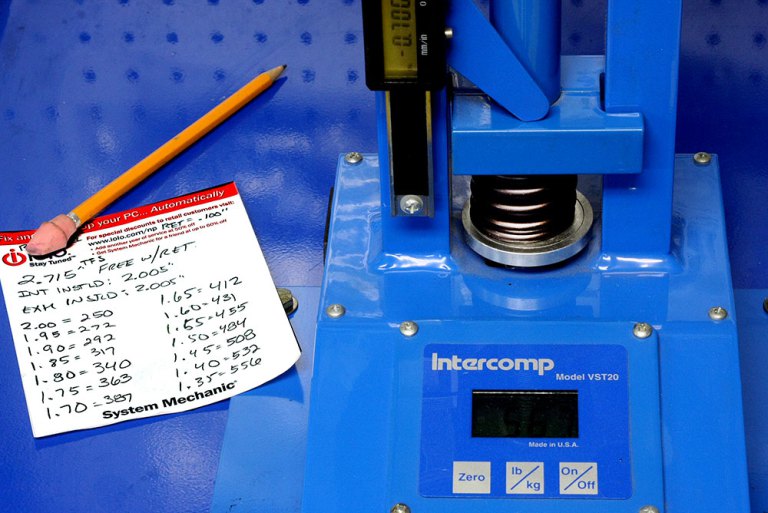 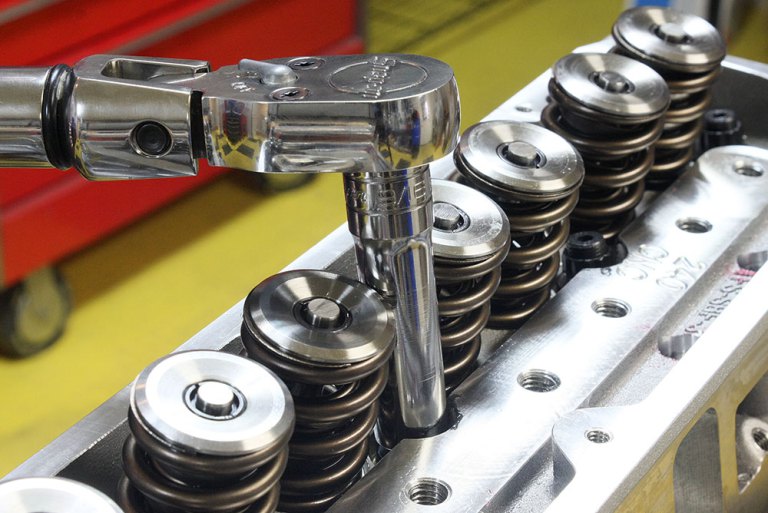 The Crower valve springs' large O.D. caused interference with the 6-point ARP head stud nuts, so smaller 12-point ARP nuts were torqued on 8 of the head studs to allow a socket to fit.

When searching different cam catalogs, Petralia found a particularly nice solid roller grind with specs that looked really favorable on paper. But when test-fitted in the 438, there was literally zero piston-to-valve clearance. So a new custom cam would have to be designed from scratch. 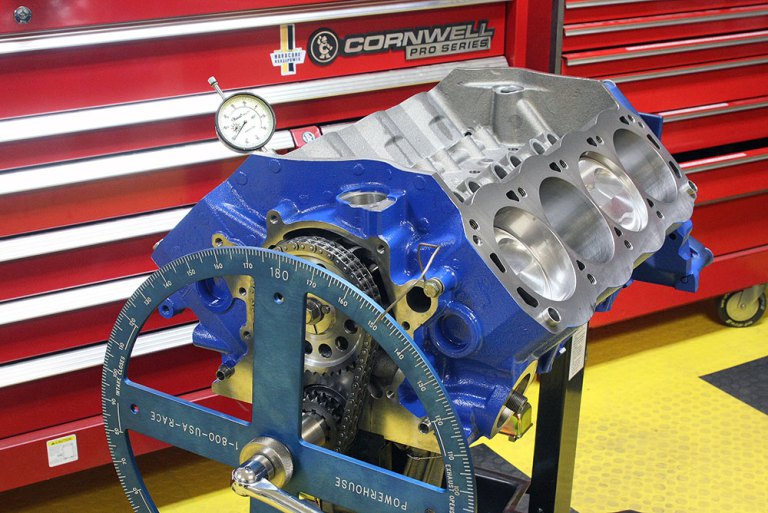 The custom Comp Cams roller stick features over .740" lift, and was degreed-in @ a 106-degree intake lobe centerline (ICL), which means it was installed "2-deg advanced" from the 108 Lobe Separation Angle (LSA) ground into the cam.

Hardcore has worked closely with Comp Cams engineers trying new ideas and making big power many times in the past. But this was a particularly tough challenge, because now they were trying to create lobes that'll make the power and rpms they wanted, but had to fit in the engine they've already built. after hours of research and dozens of phone calls & emails, they ended up with a custom roller that sacrificed 2-degrees intake duration at .050-lift, and .015-inch total intake lobe lift. But, it offered .017-inch less intake, and .020-inch less exhaust lift at TDC-overlap, yet featured the same .050 duration with even more total valve lift on the exhaust side than the catalog grind! (For more info on the importance of lobe lift @ TDC overlap, see Sidebar about PTVC). We ground the new cam on a 108 LSA and we found the best fit installing it 2-degrees advanced (106 Intake Lobe Centerline). We combined the new cam with .052-inch thick Fel-Pro MLS head gaskets (PN 1134SD5) which provided enough PTV clearance for comfort.

With the new cam in place, an Edelbrock 2924 Super Victor intake manifold was hand-ported to match the raised runners of the TFS heads. The ported manifold, along with 1.7:1 ratio Jesel Pro shaft rockers, would give enough breathing to support over 700hp. 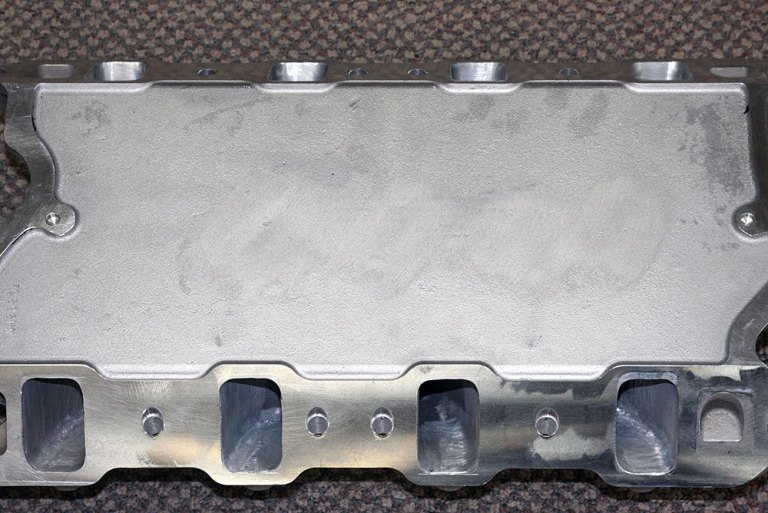 The Edelbrock Super Victor intake manifold comes pretty clean out of the box. But the intake runners had to be raised to match the taller ports in the TFS heads. The ports were finished off which a semi-smooth polish about 2-1/2-inch into the runners and a little cleanup work was also done in the plenum area. 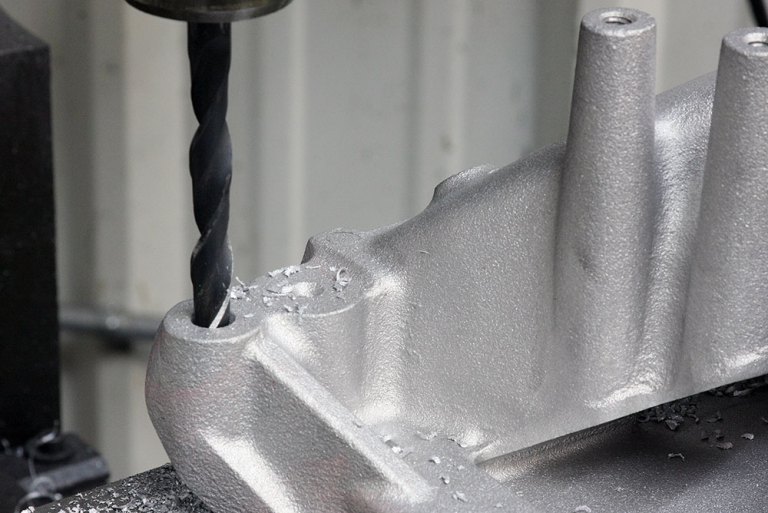 Milling the heads meant the intake bolts no longer fit. Instead of taking the time to "slot" each bolt hole, it's just simpler to enlarge them to the next size drill bit since Ford bolts go straight in. 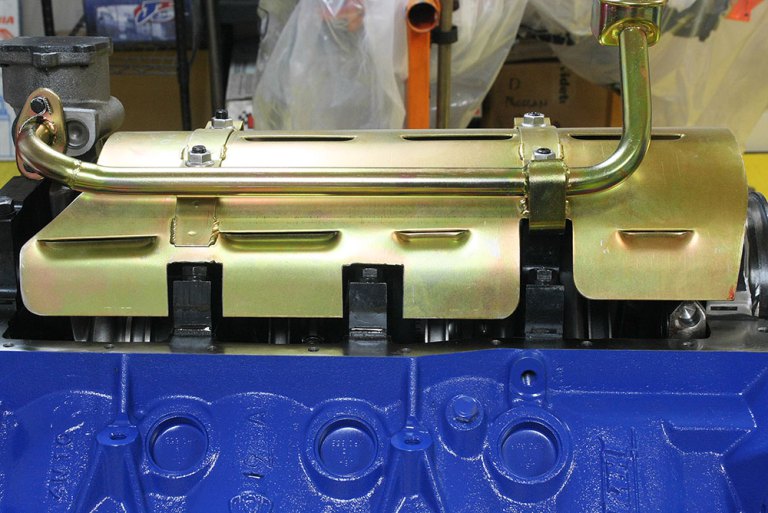 The Milodon windage tray didn't clear the 4-bolt billet main caps on the SHP blocks, so Petralia cut clearance slots on its sides. It also required some trimming in front near the oil pump (left side in photo). But once clearanced and seated properly, the tray had no trouble clearing the 4.100-inch stroke Scat crank and connecting rods.

During installation of the Milodon Racing oil pan, which is specced to fit the common Fox-body chassis, there were plenty of spots that needed extra clearance. Like around the large billet steel main caps of the Dart block. The oil pan also featured an extra-wide passenger-side kick-out which limited our starter clearance. Even with a hi-torque mini starter from Powermaster featuring "Infini-Clock" positioning made to clear most headers and oil pans, they still had to massage the outside of the pan to fit.

Moving to the front of the engine they had to machine some custom spacers for the MSD crank trigger mount, and Powermaster alternator kit, since neither were engineered to bolt onto an engine running a GZ Motorsports vacuum pump and Meziere Enterprises billet electric water pump. Luckily, the water pump had dual-side inlets allowing the lower radiator hose to mount on the driver's side of the engine, or you'd never be able to see the timing pointer. 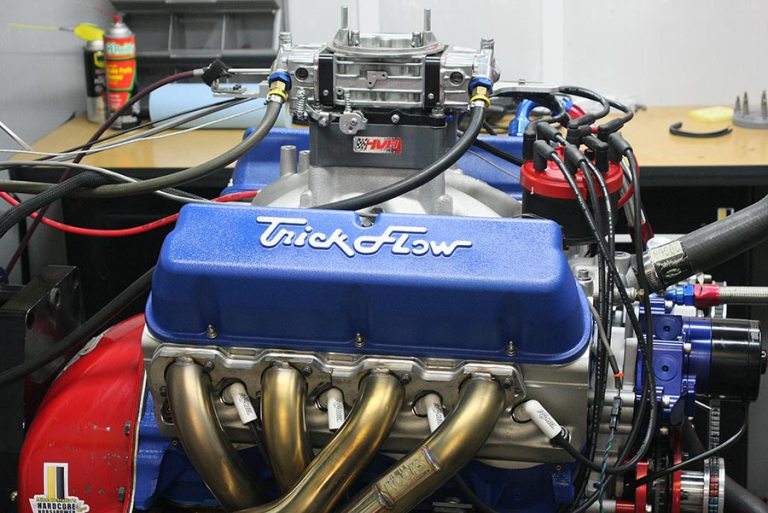 A 950cfm Trick Flow double-pumper set up with drag-strip calibrations right out of the box topped off this awesome engine. The custom-painted TFS cast valve covers match the engine block's classic VHT Ford Light Blue color to really set this build apart from the rest. 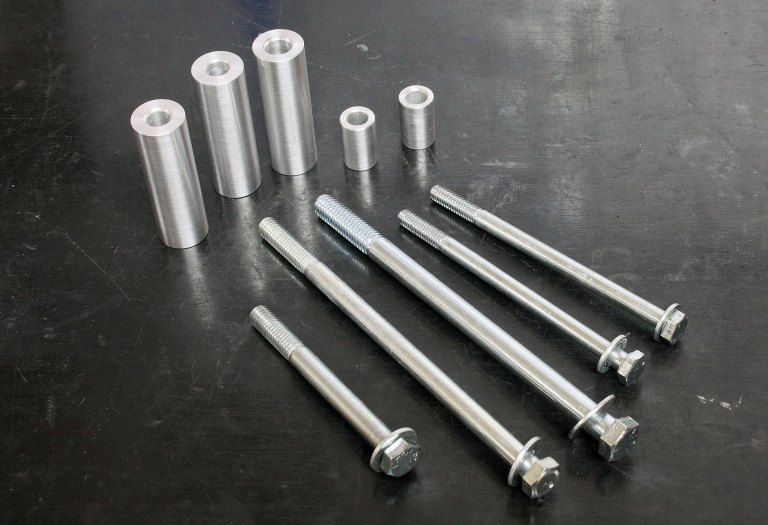 Mounting the Powermaster 100A , 1-wire alternator required the fabrication the of longer billet aluminum spacers and longer bolts to work with the GZ Motorsports vacuum pump drive pulley, (not shown in this photo). See lead photo for the alternator pulley setup installed. 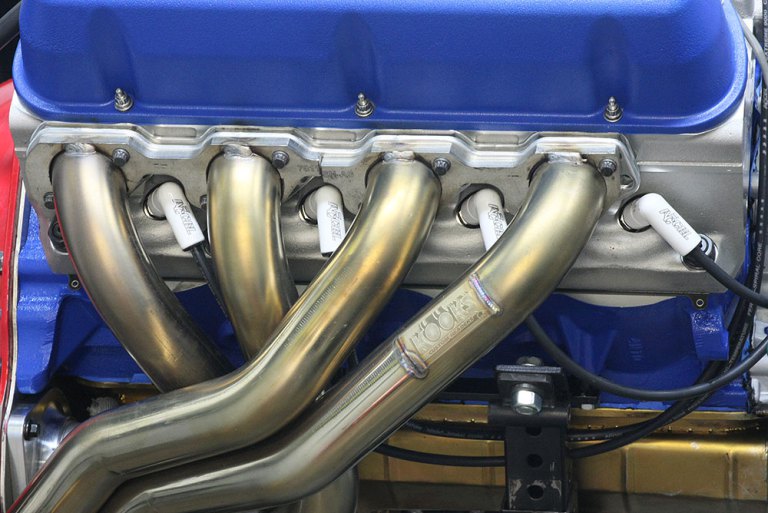 The big 2.0-inch Kook's stainless headers left no room for spark plug wire boots, requiring removal of the headers to check/change the plugs. Some of the header flange was later ground away allowing enough clearance to get the boots on and off.

After a serious flogging on his 2,000hp Land & Sea engine dyno, Petralia found some power with jetting and air-bleed mods, and some timing adjustments. Best peak horsepower (735hp) was found using a 2-inch tall HVH "Super Sucker" carb spacer. And then they tried a 1-7/8-inch open spacer from Wilson Manifolds that sacrificed a small amount top-end HP (731hp, or just .5%), but made +12 ft-lbs more at peak TQ. Either way, when combined with the already tall Edelbrock intake, the spacers put the carb pretty high above the engine so a giant hood scoop is definitely in order. 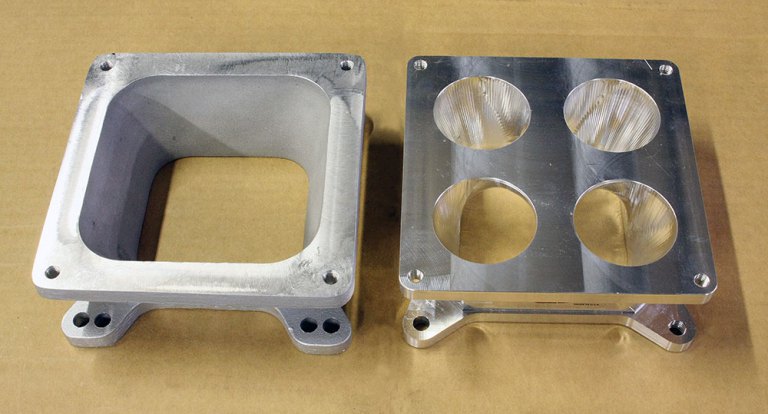 A 1,050cfm Holley Dominator was tried to add more top-end. Two different carb adapters were used to fit an otherwise stock, out-of-the-box Holley 0-8896-1 on top of the 4150-flange manifold. 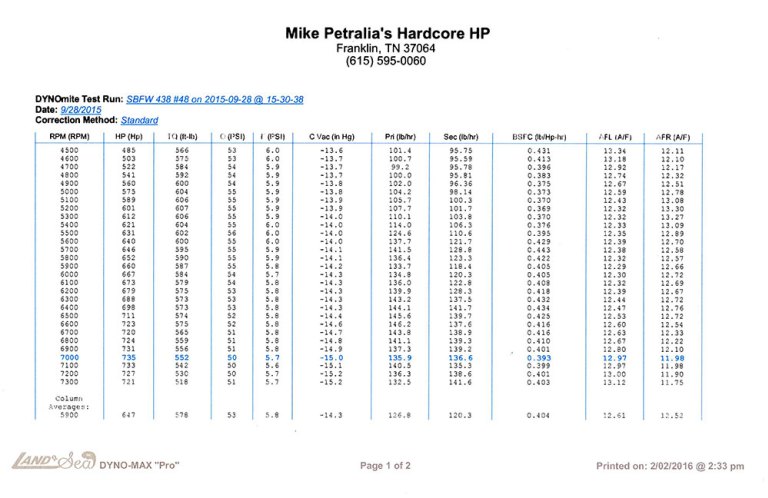 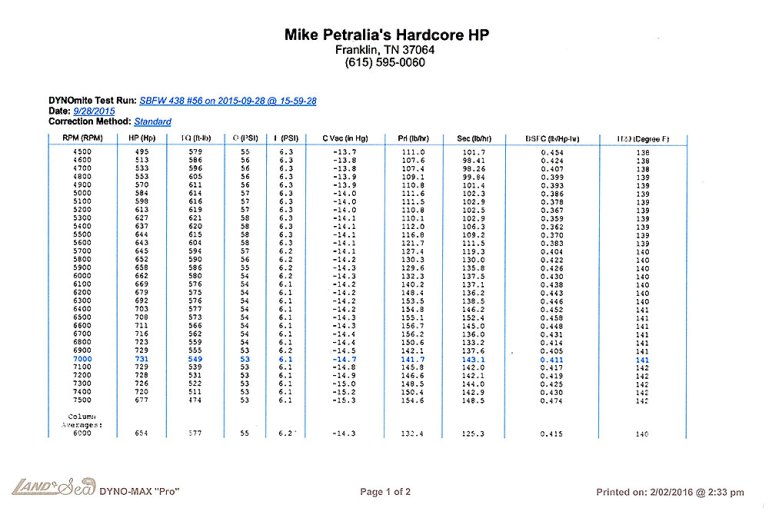 A 1-7/8-inch open plenum Wilson Manifolds aluminum spacer actually netted the highest peak torque, (621 ft-lb @ 5,300rpm vs. 607 ft-lb @ 5,200rpm with the 4-into-1 spacer). But the Wilson spacer gave up 4 peak HP. Both spacers peaked @ 7,000rpm. Petralia says he keeps about 50 different carb spacers in stock at all times because not every spacer is the best for every application.