A Pro Mod Hemi for the Street 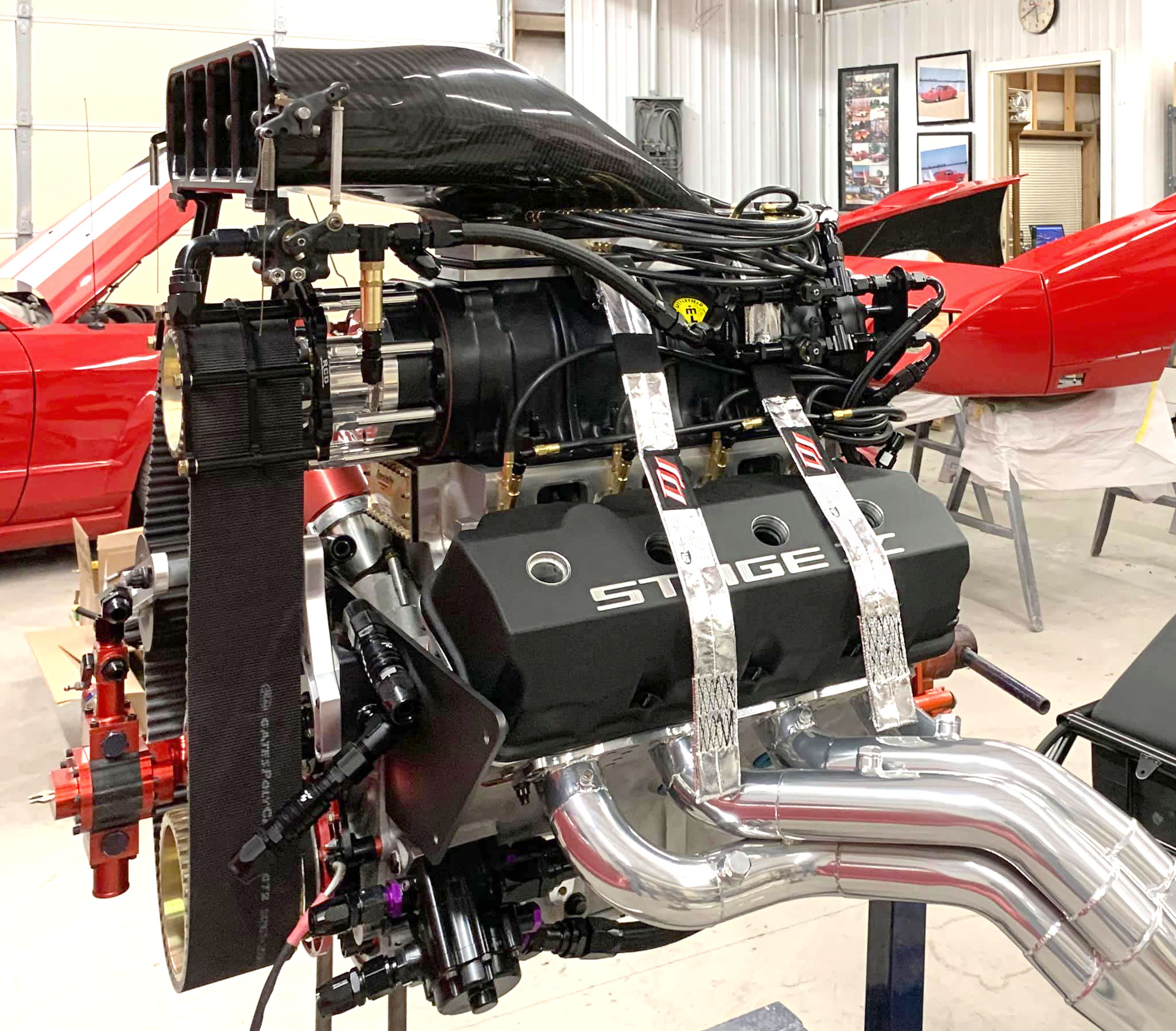 Noted Pro Street car builder Wally Elder decided to build an all new version of his previous 1969 Dodge Daytona Pro Street car with an all new Pro Mod style aluminum Hemi. A well-regarded Pro Street builder from the eighties, Wally chose to build an all new Daytona to replace his previous car.  The new car borrows heavily from current drag racing technology and brings a whole new level of potential to a genre often criticized for talking the talk, but not walking the walk. He commissioned Bullet Racing Engines in House Springs, Missouri to build the street-bound beast and thanks to Bullet's Jim Gray we got an early look at the details inside. The engine is a 526 cubic inch Indy Maxx Chrysler Hemi built with all the best Pro Mod internals, but capable of street operation with the right tune. Wally set a goal of 3000 horsepower and while the engine has not been dyno'd it certainly contains enough magic bullets for that kind of power level. 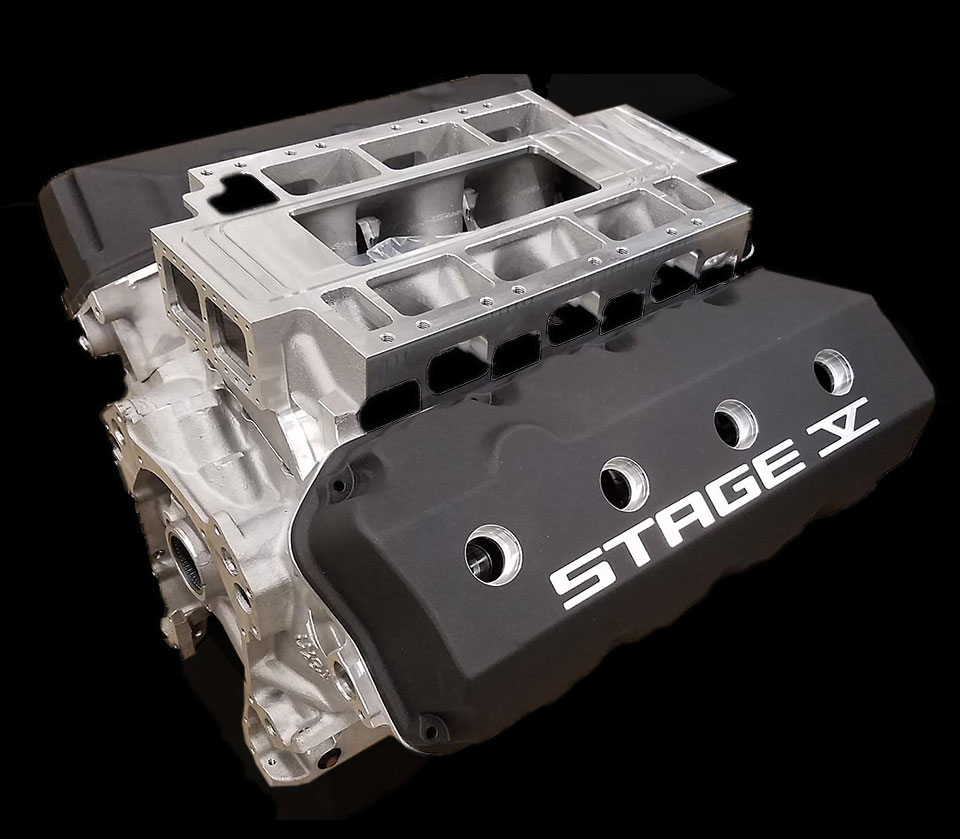 The all new car is being created to be one of the finest examples of the Pro Street art and Wally intends to show it extensively at major car shows before wringing it out at the track. And who could blame him. All that power has the potential to be a handful, but he is itching to have a go at it once it has done the show circuit. 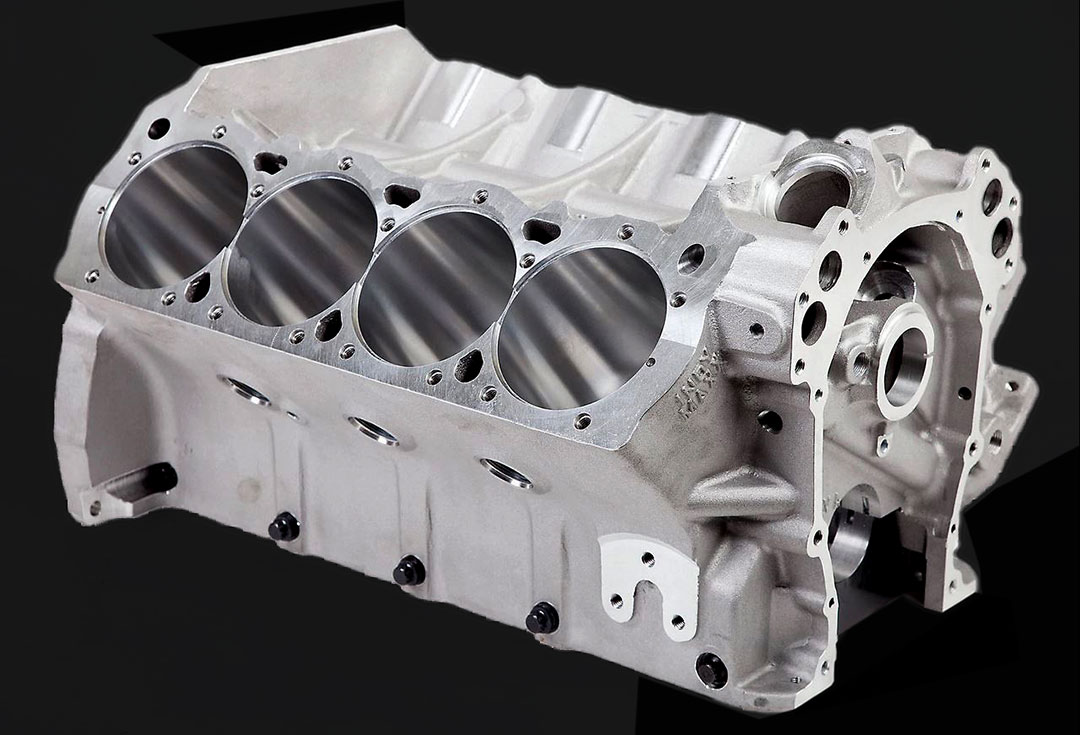 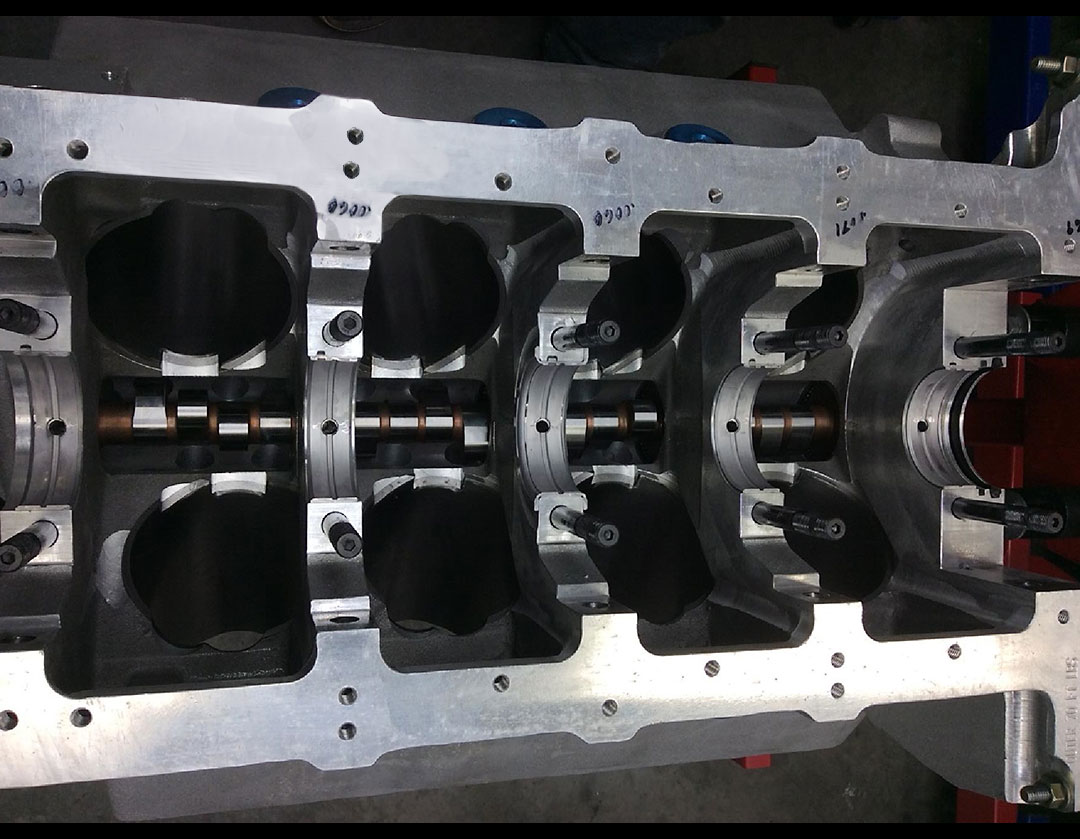 The Indy Maxx aluminum cylinder block is cast in the United States and is fully water jacketed, with siamesed cylinders. It is easily the the logical choice for today’s high horsepower applications. This engine uses the tall deck version (10.720-inch) and is sleeved to a final bore size of 4.310 inches. The bare block with billet steel caps weighs a mere 133 lbs. All five billet caps are cross-bolted with ARP studs and cap screws. 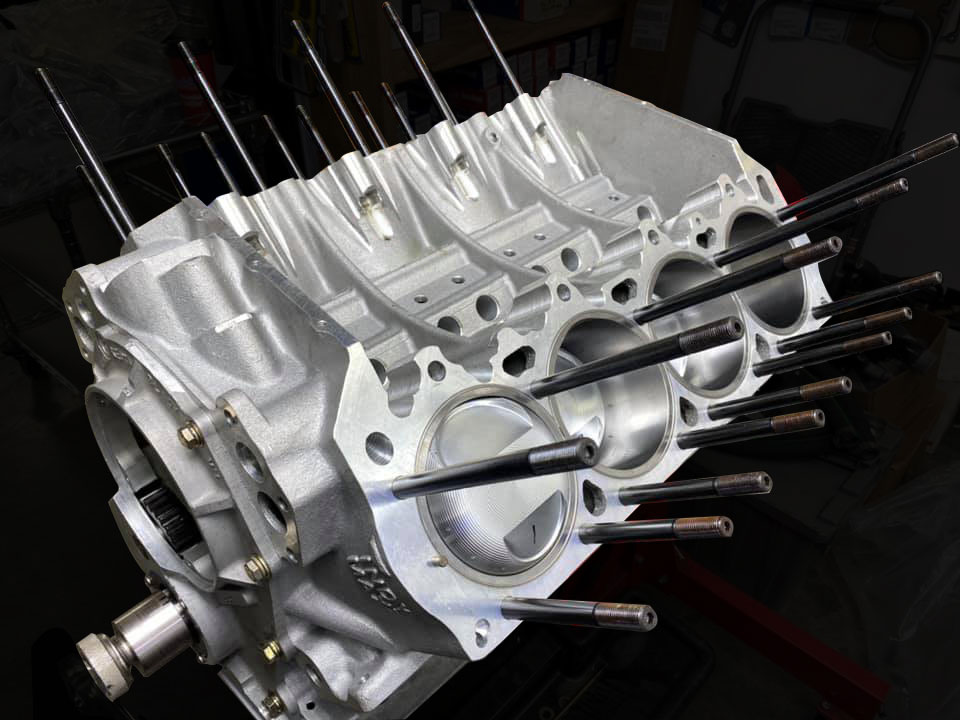 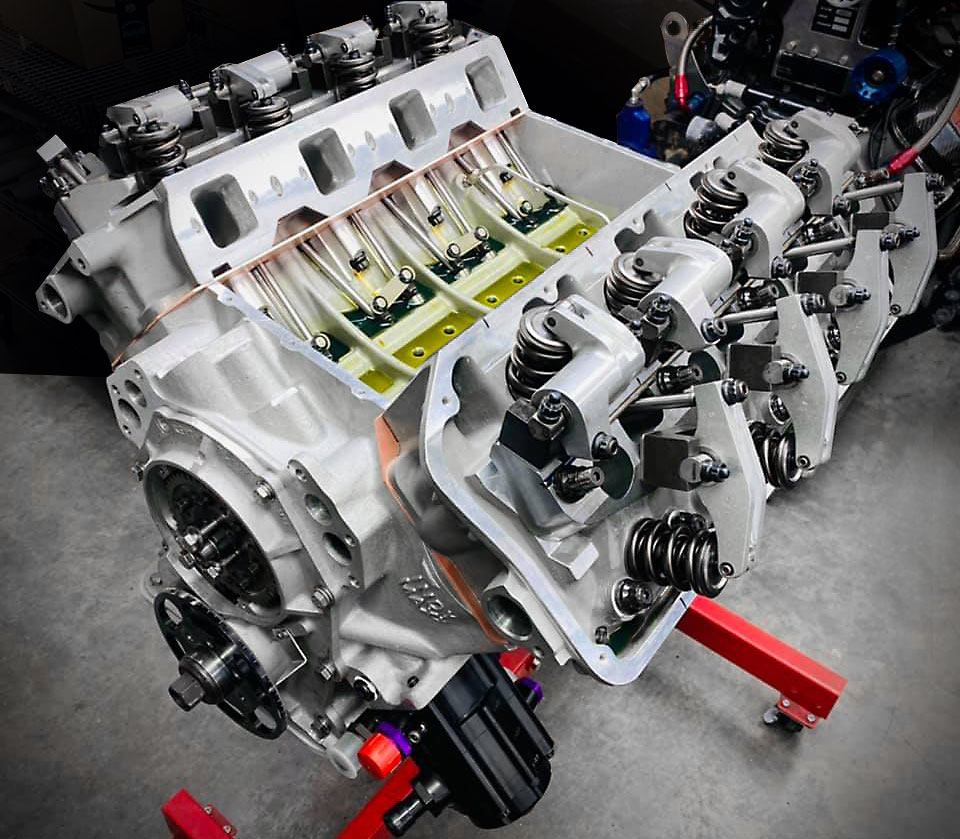 The cylinder heads are fitted with ARP studs and the rest of the engine uses ARP fasteners throughout to ensure maximum reliability. Wally's block is the tall deck version with raised cam position for 55mm cam bearings. It incorporates extra clearance for a large stroker crankshaft and provisions for internal head oiling with a crossover line. It has been bored and plated honed and the decks have been squared with a BHJ fixture. 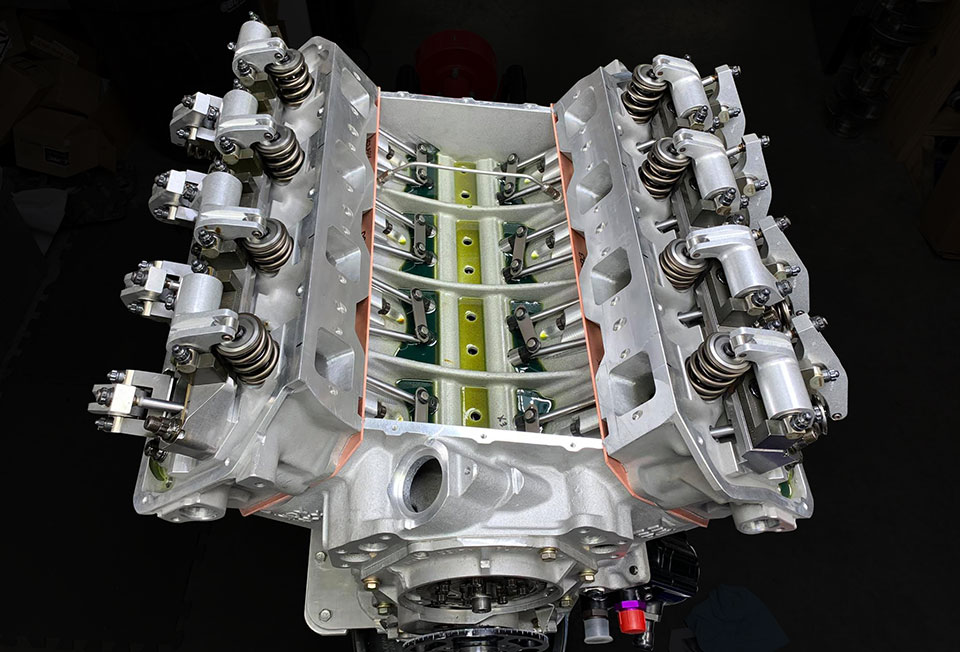 No piece of art hanging in any highbrow French museum ever looked this good, at least to pure gearheads anyway. 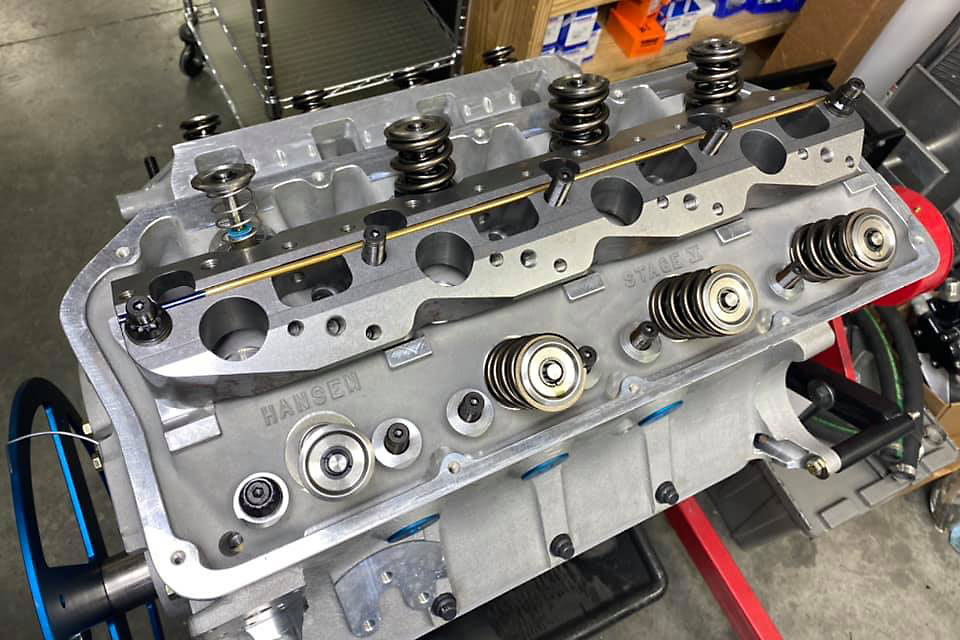 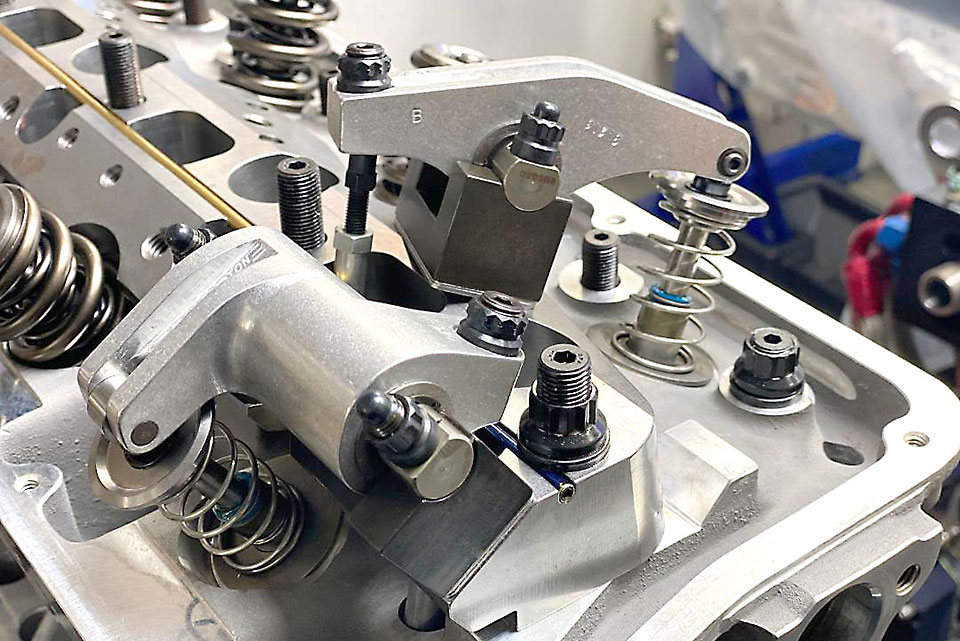 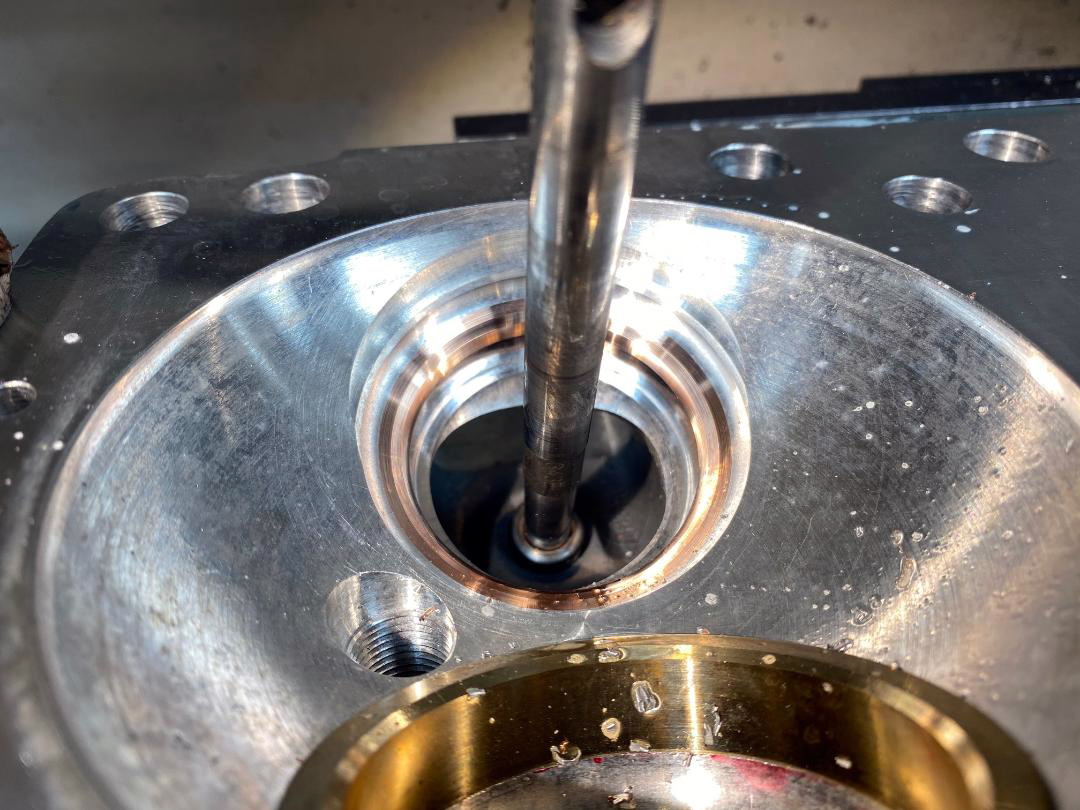 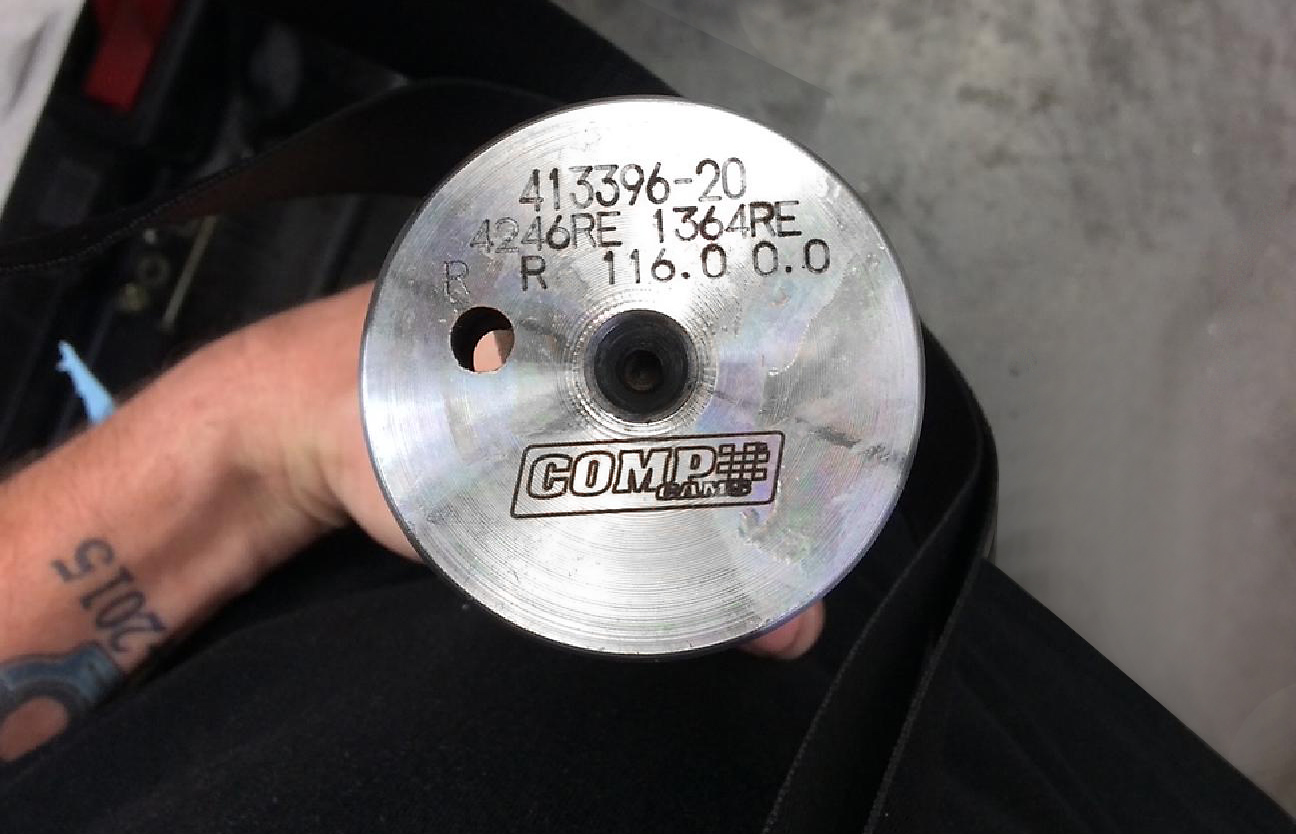 Copper alloy valve seats are installed in the Stage V aluminum heads.Valve szizes are 2.4-inch intake and 1.9-inch exhaust. Here is the Comp Cams shaft specifically ground for this application. It indicates the part number, specific lobe profiles for the intake and exhaust and 116 degree lobe centers. The lift is .800@.050 and the duration is 296/304 degrees, intake and exhaust respectively. 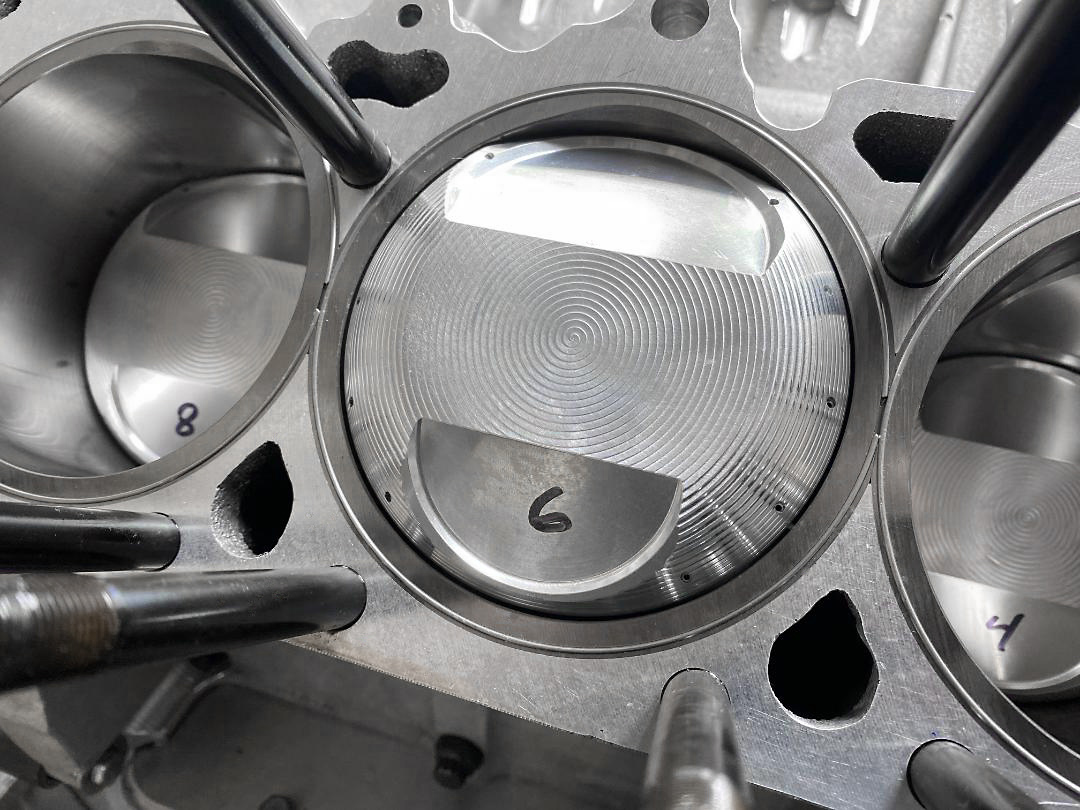 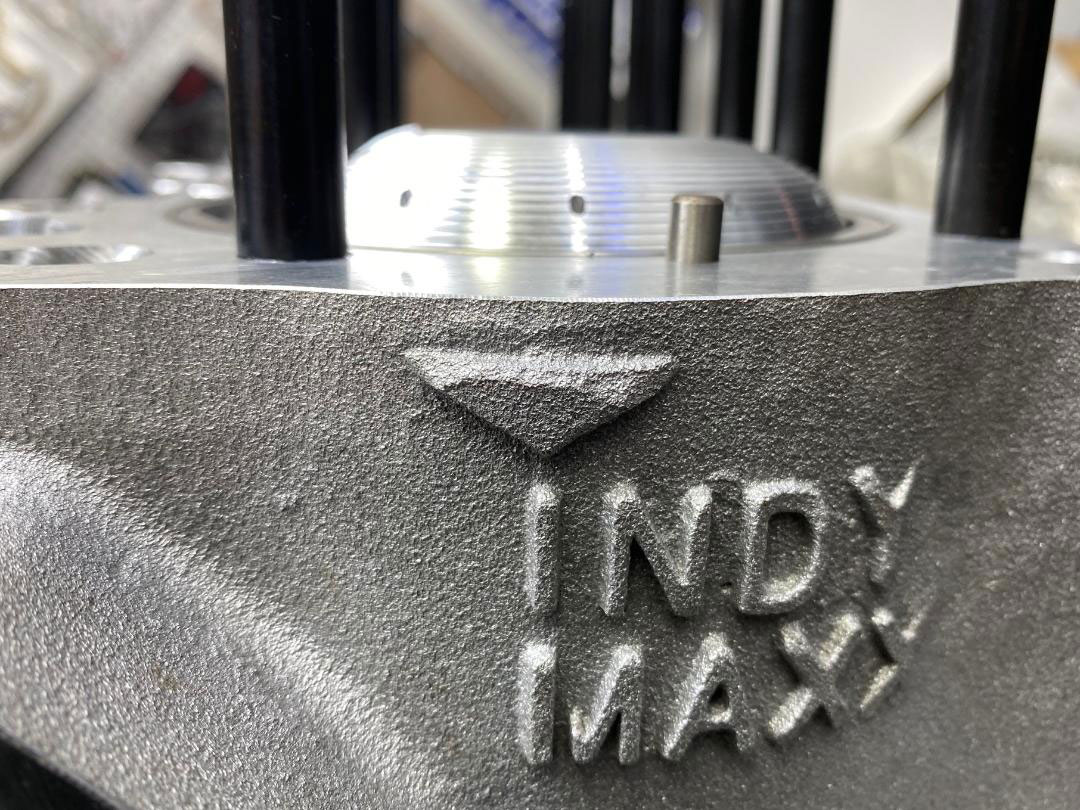 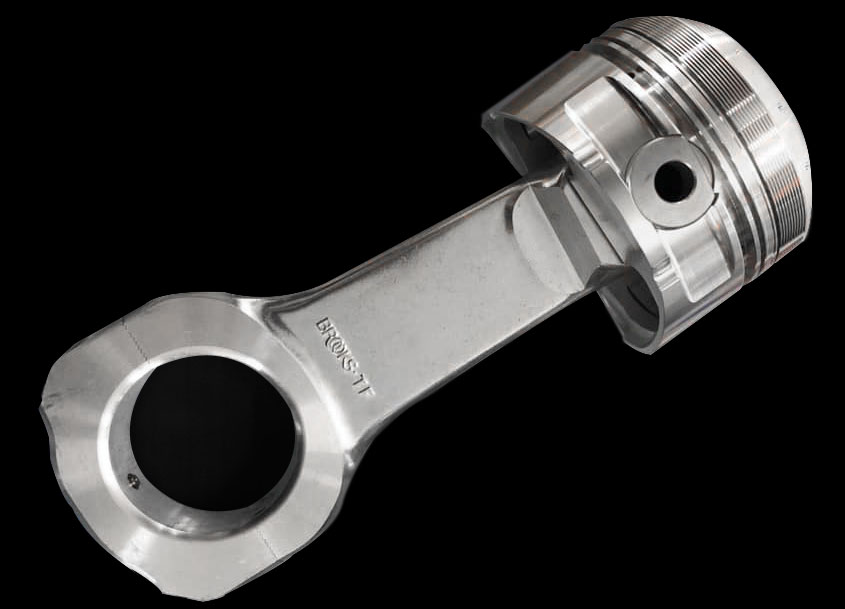 Pretty heavy duty stuff for a street machine, but these Brooks Top Fuel rods will eventually be asked to stand up to some severe duty when Wally gets to the track. Take note of the extra stout small end of the rod and the pin buttons with very thick-wall (0.300-inch) 1.156-inch diameter piston pins to absorb bending moments under high cylinder pressures. There are no pin locks on these pistons. Instead, easy to install pin buttons incorporate a flat spot to provide support for the bottom oil ring rail.  They use a JE ring set with an .043 top ring, 1/16 second ring and a 3/16 oil ring. 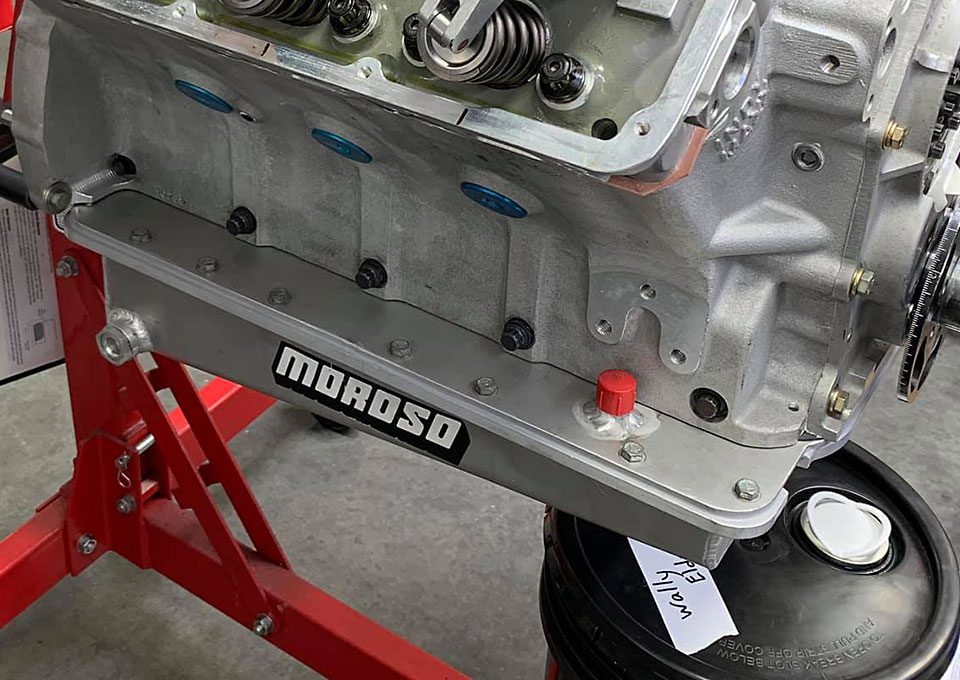 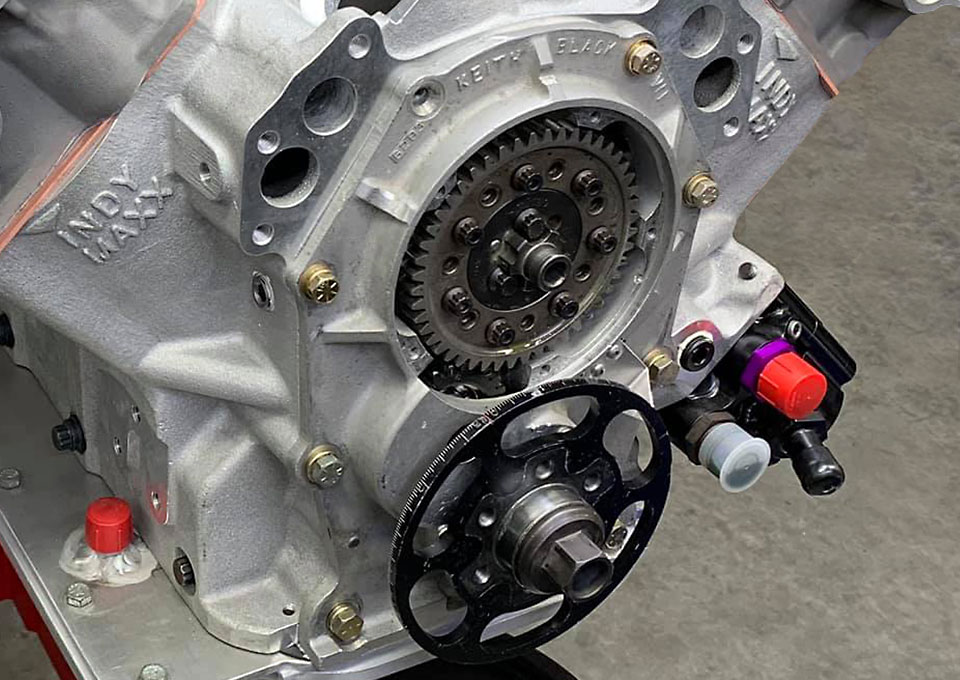 The engine uses a Keith Black front cover and gear drive for the camshaft. The oil pan is a Moroso dry-sump unit and the oil pump is a custom piece from RCD engineering. 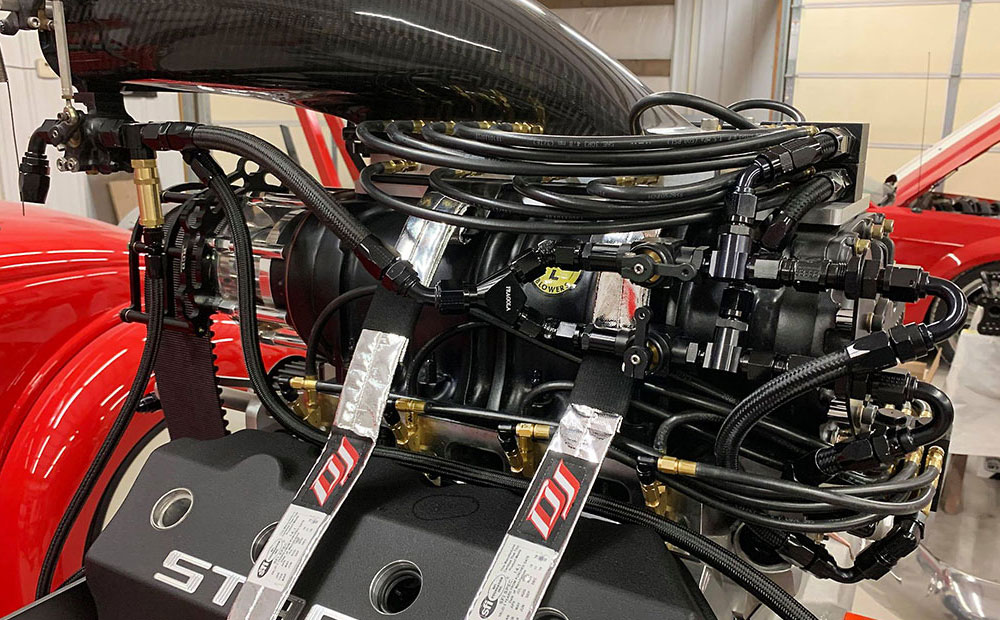 This complicated looking setup is Wally's own idea. It's a Mert Littlefield high-helix 14-71 supercharger with a home-built dual fuel system that permits operation on methanol or E85 gasoline. Wally fabbed the top injector plate for dual fuel feed on top and used the Y-fittings for dual feed on the manifold. He runs the blower 30 over and As form follows function it is plenty bad ass looking. The car can carry 42 gallons of fuel with two 16-gallon tanks in the rear and a 10-gallon tank up front. The front tank is methanol only so the car can be run at the drag strip without fueling from the rear tank as tech inspectors may not be impressed with fuel lines running through the car even though they are fully protected. The rear tanks can be shutoff for racing, and for those who wonder about it, he figures he can drive it about 25-30 miles on the methanol and maybe double that on the E85. 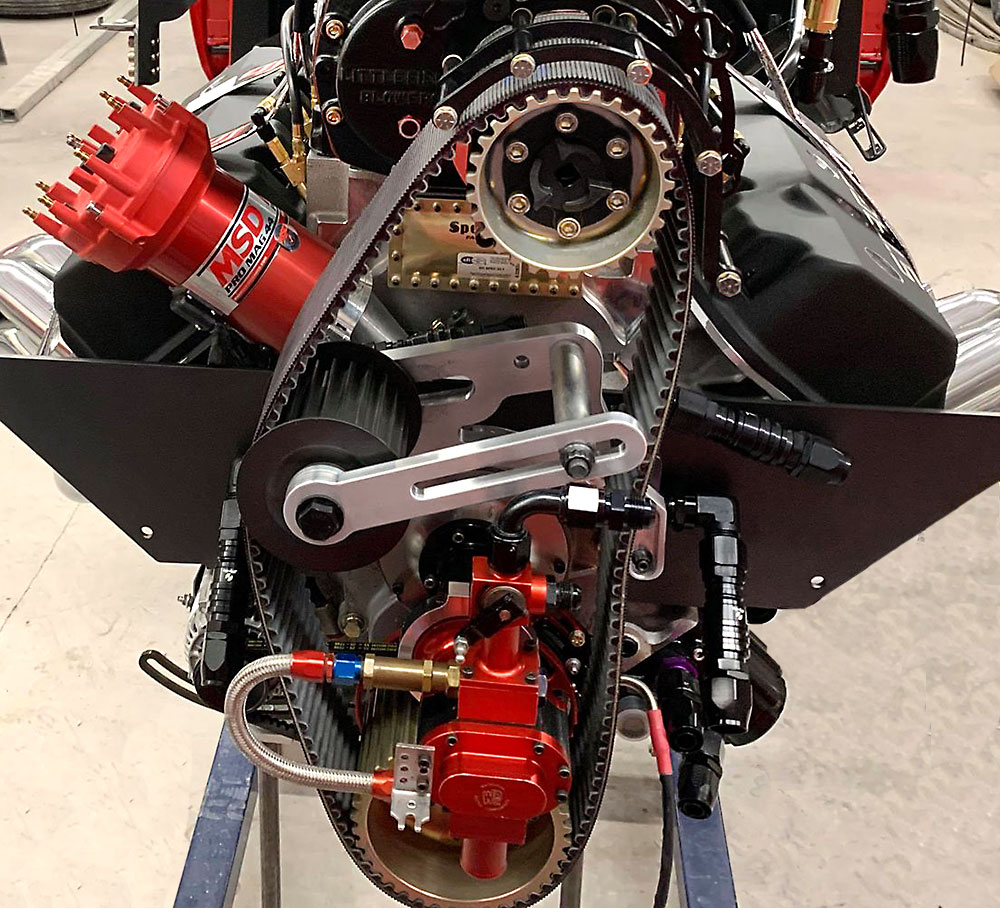 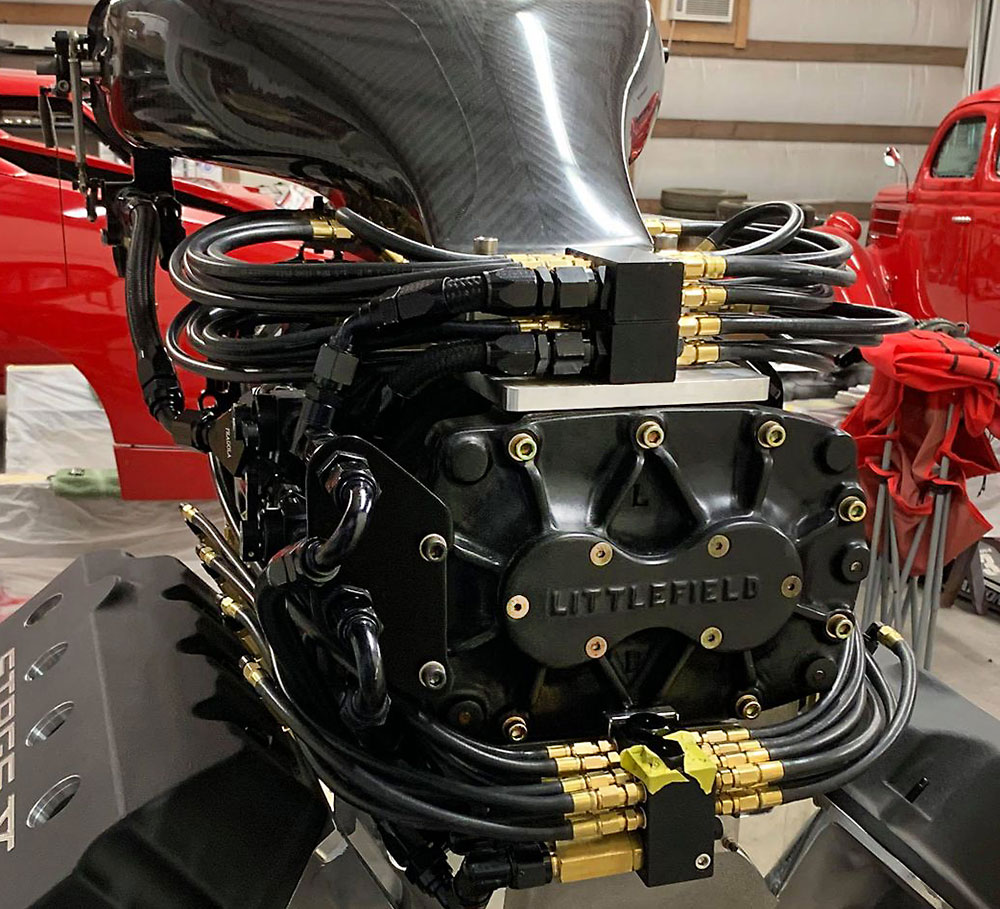 The Aeromotive/Waterman fuel pump does double duty for the fuel system, drawing from whichever tank Wally selects. After running on the methanol, he can switch back to gasoline to clean out the fuel system and prevent corrosion. The rear view gives you a good idea how the system is plumbed. The upper and lower systems are separate, but draw on the same tank whichever one is selected.

Be sure to watch Facebook and The Pro Street Era Group for an announcement when the car is finished and we publish the story about the complete build of this amazing Pro Street car at https://www.alternatesupercars.com/1969-dodge-daytona-2-0/