CMC's Auto Union Type C engine replica in 1:18 scale is a stunning addition to any serious model engine collection. They are difficult to find, but they make a great addition to display next to CMC's Auto Union Type C model car or as a stand alone for your engine collection. The level of detail is spectacular, showing every spark plug wire, hose and lots of exquisite details. Over 400 individual pieces are required to produce this stunning engine replica originally designed by Ferdinand Porsche. The engine is mounted on a high quality wood plinth, and is accompanied by a clear acrylic collectors showcase to protect it .

The 1936/37 Auto Union Type C developed by Ferdinand Porsche wrote racing history like no other racing car had done before.  In 1936 Auto Union presented with the Type C a monoposto which was almost totally different from all the other racing cars known so far. What stood out especially was the unconventional design of the sensational 16-cylinder V-engine installed behind the driver and in front of the rear axle – an innovation which soon became commonplace. 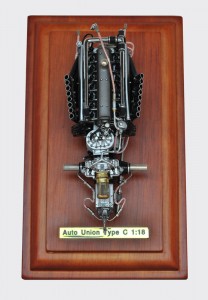 This high- performance racing car was above all so successful because the bullet with 520 hp was driven by a highly talented racing driver: Bernd Rosemeyer. 1936 was his most successful year when he became European Champion and won numerous Grand Prix. In 1937 the new ace of the Auto Union could keep his main competitor, Mercedes-Benz, in check as well and was able to continue his successful career with five further wins. At the beginning of 1938, however, his career came to an abrupt and tragical end by a fatal accident which occurred during the attempt to break the land speed record.