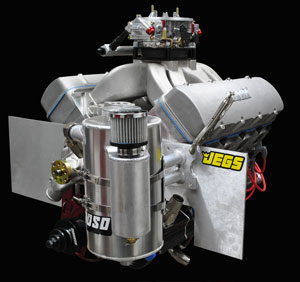 Our Dart based 565 cubic inch big block Chevy was built for a 1990 Pontiac Trans Am running at Bonneville. It runs in the AA/Gas Coupe class where the current record is 263.603 MPH. A larger engine is likely more desirable in this class and room has been left to enlarge

the engine if necessary. This particular combination was chosen because it permits 7000-plus RPM while keeping the mean piston speed below 5000 feet per minute. The Dart Big M block uses a 4.600-inch bore which leaves room for future enlargement while the 4.250 stroke maintains the desired piston speed which seems prudent given the long 5 mile pull at high RPM. A 4.5-inch stroke would have netted 598 cubic inches, but at approximately 500 rpm less engine speed to achieve the desired piston speed. The initial feeling was that more engine speed (more power strokes per minute) with appropriate gearing and a tighter power band would pull the car harder once it got up against the air wall at high speed. PC simulations indicated more net power in the power band with more RPM. As with any racing application it is very important to match the engine’s power output and performance characteristics to the vehicle’s gearing, tire size and in this case aerodynamic properties to achieve optimum performance.

The key power makers are the Dart Big Chief cylinder heads fitted with 2.4/1.9-inch Victory titanium valves, CNC combustion chambers with bowl porting and minimal Sportsman porting at the intake port opening. A .400-inch longer rod was selected to help tighten up the power band and promote high speed power while the Dart head ports were purposely left smaller to promote higher port energy within the specified power band. The single four barrel configuration is not ideal compared to a tunnel ram with appropriate runner lengths, but the initial combination amounts to a financial compromise given the significant additional cost of a dedicated tunnel ram intake with ideal ram tuning. The initial effort was conceived to see how well the engine would perform with essentially off-the-shelf induction parts that include a spread port Dart intake and an 1150 CFM Holley Ultra HP Dominator carb. A larger carburetor is likely necessary, but it was felt that Bonneville’s altitude and average air density might utilize the smaller carb more effectively. We shall see of course, and reader comments and discussion are encouraged.

Similar 565 cubic inches engines offered on the internet by various engine builders with peak power figures ranging from 1020 HP to 1080 HP.  Our goal was to attempt to approach this level with minimal expenditure while trying to maximize affordable power upstairs with minimal separation between the torque peak and the power peak. If it’s not enough we have left room to expand our efforts, albeit at greater cost. In this build we’ll concentrate on fundamental engine building practices with particular attention paid to the many specific details recommended by the various parts manufacturers.