In recent years, OEMs have made a strong move into gasoline direct injection or GDI to improve fuel efficiency and power output. More than fifty percent of all new cars now incorporate a direct injection fueling strategy and it has helped improve fuel economy, drivability and power across the board. In a direct injection engine, fuel is injected directly into the combusation chamber at a much higher pressure than conventional multi-point fuel injection which injects fuel into the intake tract. Higher pressure is required to accomplish this via a common rail fuel system. The fuel is injected into a shaped slot or notch at the center of the piston crown. This helps the fuel charge disperse quickly and evenly through the combustion chamber. It's a proven technique, but like anything else, it exposes potential pitfalls to unsuspecting users. Among them is Low Speed Pre-Ignition or LSPI, a previously unrecognized combustion anomally that can lead to severe engine damage if precautions are not taken. Manufacturers and dealers have struggled with this problem and it took a high performance oil company and a dedicated research program to effect a proper solution. 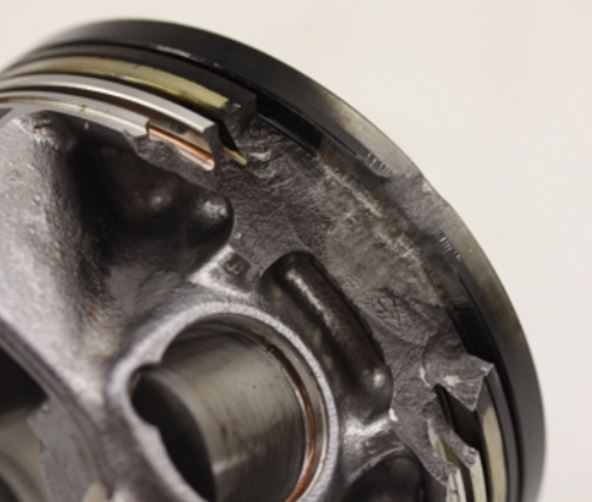 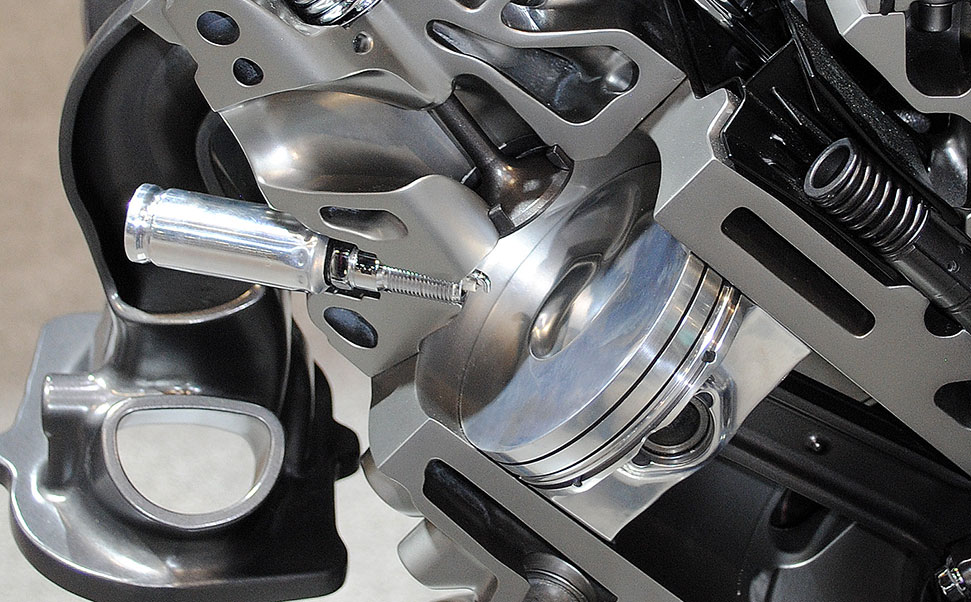 A centralized trough in the piston crown sits almost directly below the spark plug. Fuel is injected toward the center of the trough which is suitably shaped to disperse it evenly for superior combustion.

What is low-speed pre-ignition (LSPI)?

LSPI is a direct result of the industry trend to downsized engines and the use of turbocharging to maintain power levels. LSPI has many names including stochastic pre-ignition, but it is frequently referred to as mega-knock or deto-knock. It occurs at low speeds when the engine is heavily loaded during wide open throttle events. Research has demonstrated that tiny droplets in the combustion chamber comprising a mixture of fuel and oil prematurely ignite prior to the spark plug firing. The result is an abnormal, uncontrolled combustion that hammers the piston with massive spikes in cylinder pressure.

The role of lubricants was not clearly understood during early investigation of the problem. But as LSPI problems became more widespread, efforts to control them quickly advanced beyond the simpler explanation of hot spots or surface ignition points within the cylinder. LSPI was found to incorporate random pre-ignition events most likely initiated by the auto-ignition of minute oil droplets or deposit particles in the mixture. Damage from LSPI was found to be more severe than first recognized and it became a serious challenge to automakers seeking to maximized performance and fuel economy.

It was discovered that high pressure direct injection caued a dilution of of the surface tension and viscosity of the lubricating oil.  The resulting droplets accumulated in the crevice volume above the top ring where they were forced out by the mechanical action of the rising piston on the compression stroke. The chemical makeup of these droplets causes them to vaporize, creating an auto-ignition scenario or LSPI. Addressing the chemistry provided a major clue to solving the challenge.

Smaller, boosted gasoline engines operating at low speeds and high torque have offered a great solution to performance and fuel efficiency requirements, but LSPI stands in the way of reliable progress. Downsized and boosted engines spend much more time in a low-speed, high-torque environment that invites LSPI. Investigating the specific chemical causality finally penetrated the fog to pinpoint the need for lubricant-specific modifications that resist LSPI. Industry research indicated that the detergent chemistry in modern motor oils increased the tendency for LSPI. Driven Racing Oil was invited to participate in a research program that looked deeply at the effects of each additive typically used in a motor oil formula. This allowed the research team to determine which additives in motor oil increased LSPI tendency, decreased LSPI tendency or was neutral towards LSPI. The research team was able to determine that both Calcium and Sodium based detergent additives contributed to increased levels of LSPI.
Driven Racing Oils prides itself on its ongoing development program to identify and solve emerging lubrication challenges for IC engines, so they welcomed the invitation to work in partnership with the Oak Ridge National Laboratory, GM, and Ford to investigate the challenge of LSPI in direct injection engines. The efforts of this group found that reducing the Calcium detergent  content in the motor oil also reduced the tendency for LSPI to occur. This was a key finding, but it also presents a problem for the vast majority of off-the-shelf motor oils. You see, calcium based detergents are the most cost effective detergents, so calcium based detergents are widely used in high concentrations in mainstream motor oils. Simply put, Improperly formulated motor oil with high concentrations of Calcium is the underlying contributor to LSPI events in direct injection engines. To avoid devastating damage, motor oils must be formulated specifically for direct injection engines to ensure the essential durability for top level performance and longevity. 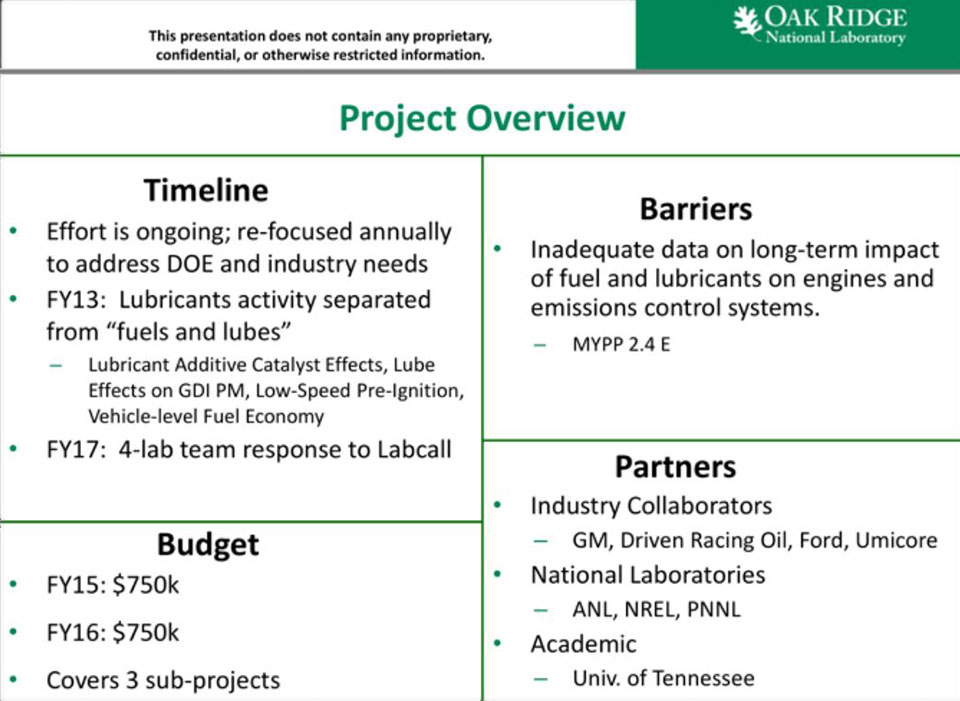 As shown on the right, low speed pre-ignition occurs while the piston is still rising on the compression stroke and prior to spark initiation by the spark plug. Like detonation, it hammers away at the piston rings and ring lands, ultimately causing a failure as seen on the piston above. Again, the research team concluded that this phenomenon is largely caused by high levels of Calcium and/or Sodium used as a detergent in the motor oil. A program goal was initiated to identify a mixture of chemicals that would provide detergent supported lubrication without promoting ongoing LSPI events. 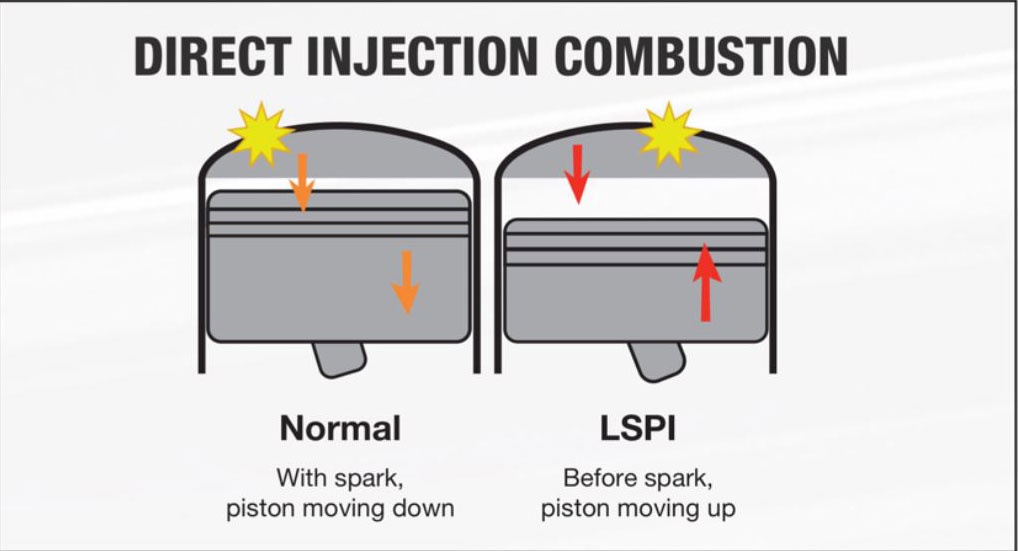 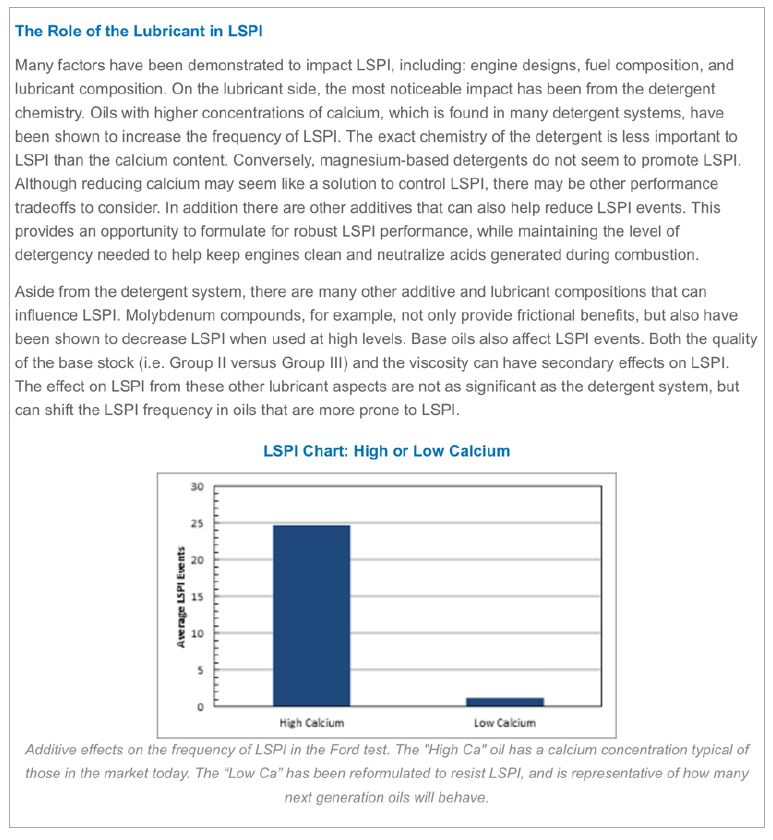 The chart on the right illustrates how Molybdenum dramatically reduces the knock tendancy of the lubricating oil when the Calcium content is reduced and Sodium content is eliminated. When Calcium and Sodium detergents are combined at a high level, multiple knock events occur. A high level of calcium along with a minimal level of Molybdenum still exhibited multiple knock events. However, the knock frequency is entirely eliminated and and LSPI is fully controlled when a combination of lower calcium and molybdenum was utilized. This solution ensures the long term durability and performance of your direct injection engine. 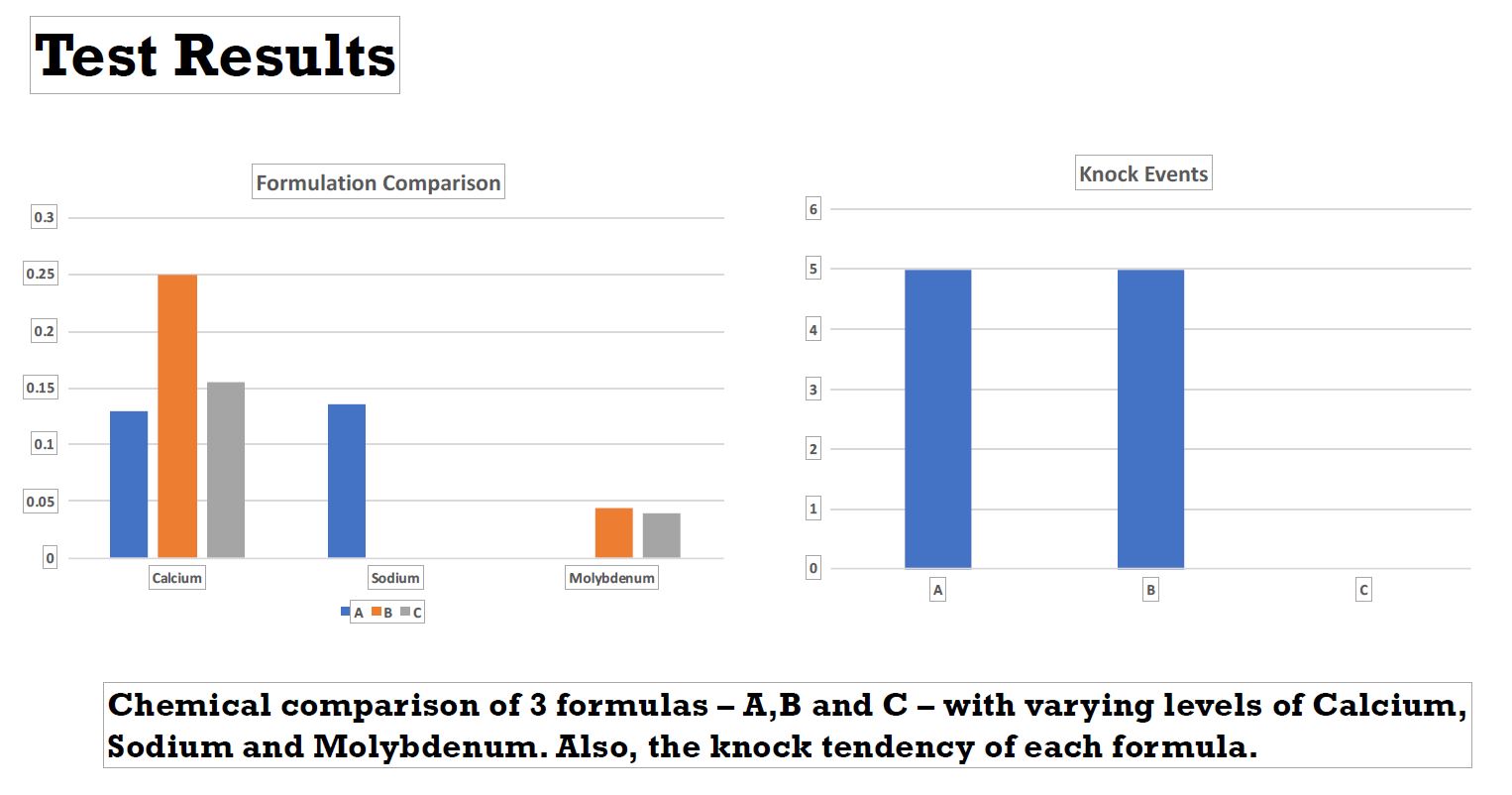 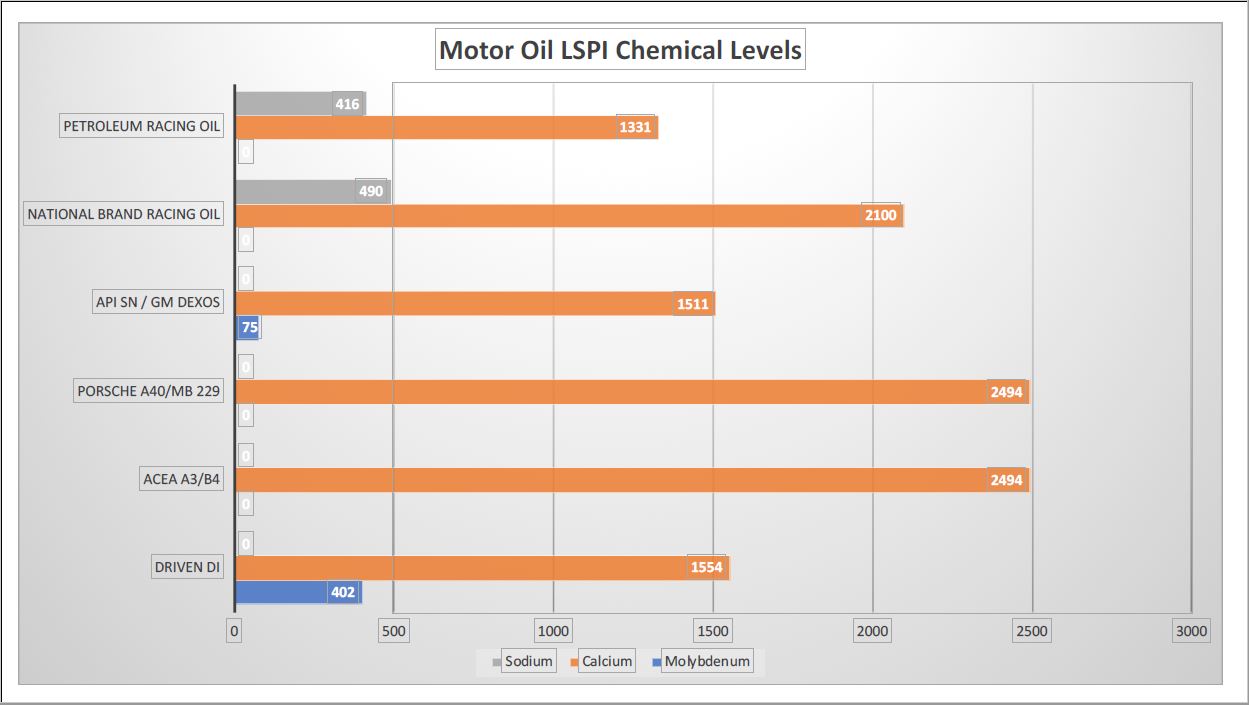 The chemical content of typical contemporary oils varies. Some oils contain both Calcium and Sodium, which is a combination that showed increased levels of knock in the research program. The LSPI problem was most severe in European formulations such as the ACEA applications which rely heavily on Calcium content. 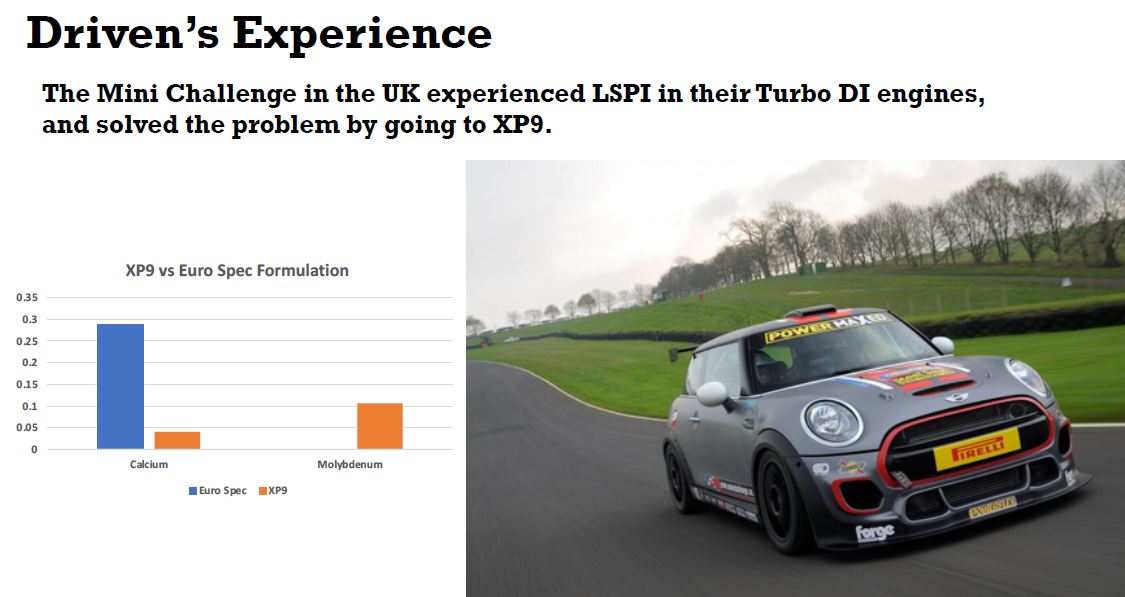 Driven's DI oils are specifically formulated for direct injection engines to combat low speed loaded preignition that leads to reduced performance, engined damage and unnecessary warranty claims on new performance cars. The result of a lengthy research program with OEM manufactures and a naional lab, they feature an additive package specifically formulated to reduce abnormal LSPI combustion events. The lower volatility oil also helps reduce crankcase vapors and carbon buildup on the intake valves. This formulation is incorporated into the XP9 racing oils and a new line of street oils to protect DI engines. Now, more than ever, you can't afford to use lesser quality conventional oils indiscriminently and not expect to encounter unwanted engine problems. One of these DI oils will match the weight specification for your car so choose appropriately and protect your major investment. 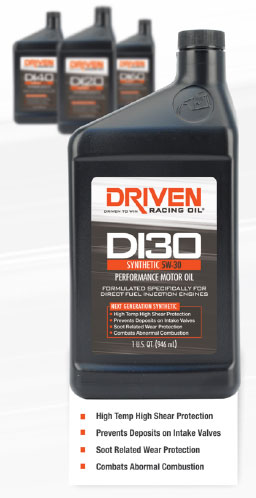 Automakers and the oil companies have been aware of LSPI for quite some time and efforts to address it are ongoing. Driven is a proacitve company with the means and drive to investigate and solve these problems. By teaming with other known research authorities, Driven has realized an effective solution that vehicle owners can rely on.