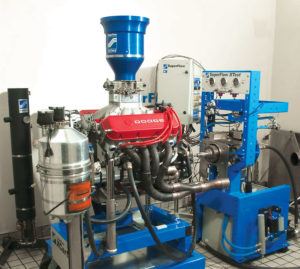 All racing engines should be tested on an engine dyno. Dyno testing fosters proper engine break-in procedures and makes it easy to spot and correct potential problems ranging from valve train issues to simple oil leaks. Most top engine builders insist on dyno testing to certify their work. Even independent builders not equipped with their own dyno facilities will take their engines to a reputable shop to check and validate their work. The dyno is a valuable tool when used correctly. It’s important to remember that the engine dyno is a sophisticated data logger and very much a comparative device whose accuracy is only as relevant as the data used to program it. It requires accurate atmospheric and engine spec data input and consistency of operation. You can’t compare power numbers from one dyno to another because there are too many variables. Stick to one dyno source and make sure it is well maintained, regularly calibrated and competently operated. Make sure the operator follows your instructions and records the data you are seeking. Most dynos are capable of recording every possible bit of data about your engine if equipped with the proper sensors. 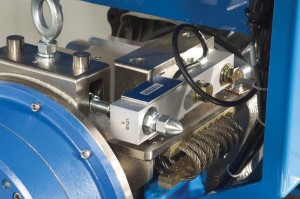 Consistent testing procedures and spot on calibration are imperative. Because dynos often “seem” to give consistent results, some operators become complacent and fail to regularly verify proper calibration. It’s easy for day-to-day dyno operators to get into the mindset that they have seen it all before and they will know when something is out of whack. This leads to the feeling that they know more than you do and that you’ll never miss the difference if their dyno is out of calibration. Good dyno operators are capable of providing considerable help and insight about how your engine is performing, but the best ones will ask you exactly what you want every step of the way. A dyno operator who doesn’t really listen to you or clearly thinks he is all that probably isn’t qualified to test your racing engine. Never let the dyno operator rush you. An operator who is more concerned about going home on time probably isn’t concerned about properly evaluating your engine. If possible develop a personal relationship with the operator and make certain he understand exactly what you want.  Most dynos record more data channels than those displayed on screen or in the printouts. If you want to track something specific ask the operator if he has an appropriate sensor that is properly calibrated. Besides the dyno calibration itself, airflow turbines are almost never checked or re-calibrated by dyno shops. Ask to examine the turbine and when it was last calibrated. If it looks like it has been through a few fires and nitrous backfires or it’s covered with dirty old duct tape, it’s probably been carelessly handled and will not likely provide accurate airflow measurements. Check the honeycomb air straightening elements inside the turbine. If they’re partially smashed or bent you might want to ask about it. If the answer is “Don’t worry it still flows alright,” you might want to reconsider. Likewise also ask the dyno operator if he “floats” his or your fuel before testing so he can accurately input the fuel specific gravity based on the ambient temperature.

Don’t wear the engine out on the dyno. Do most of your initial testing at or below the torque peak while establishing optimum spark and basic jetting.  Tell the operator you would like a full printout including all of the raw uncorrected numbers. The real gold is in the collected data channels and the least important one is the correction factor. Correction factors generally provide a pie in the sky estimate that means very little to most engine builders. The larger your dyno correction factor the more suspect the power numbers. Uncorrected numbers are what the engine really delivers for any prevailing conditions.

What About Correction Factors?

There are two basic dyno correction factors; the SAE (Society of Automotive Engineers) and STP (Standard Temperature and Pressure). SAE numbers are used by the OEMs for all their testing and they are generally the standard for most chassis dynos as well. Most dyno shops and “magazine” testers sell STP numbers because they are roughly 4% higher than SAE numbers. All dynos only collect raw uncorrected numbers. Whichever correction factor is applied is only a percentage calculation based on contributing factors that are either input by the operator or recorded by the sensors. Your dyno printout can be set to list raw, SAE and STP numbers plus the actual numerical multiplier so you can see it all and determine the “bogosity” of the correction factor for yourself. Serious tuners use uncorrected numbers and basic recorded data.

“If you base all you tuning decisions on corrected numbers, you might as well use a dartboard.”

They establish your benchmark and permits accurate analysis of fuel usage and BSFC numbers. If you’re seeking or selling numbers the correction factor is your co-conspirator. If you’re an engine builder validating your combination, uncorrected numbers tell you everything you need to know. The chances that your engine will ever run with the same conditions as the correction factor are slim and none, so what’s the point? Magazine testers use corrected numbers because they are editorially impressive. Serious engine builders glean everything they need to know from the raw data; particularly with regard to BSFC, VE, fuel flow, air fuel ratios, airflow, BMEP and the shape of the torque and power curve.

Consistency in how the raw numbers are obtained is important. Well maintained dynos are very repeatable tools as long as the operator maintains consistent environmental conditions and runs all the tests at the same oil and engine coolant temperature with repeatable atmospheric conditions. Many operators insist on running tests at coolant temperatures well below actual operating conditions. It’s easier to make big power and they don’t have to be as careful. Knowledgeable dyno operators will spot inconsistencies and verify whether it’s the dyno or an engine problem without being asked. More often than not it isn’t the dyno but rather a tuning or mechanical issue that can be pinpointed by thoughtful evaluation.

In a sense repeatability is more important than accuracy.  If the dyno reports that you made 825 horsepower, you can’t really be sure if that is a truly accurate number. But if it repeats within one horsepower over and over then you’re accomplishing something, because you can accurately judge the effect of any changes you make. It may actually only make 795 horsepower, but if it repeats and shows you gains or losses from your benchmark, the number is less critical than the degree of gain or loss and what the instrumentation tells you about fuel flow, air fuel ratios, EGTs and other factors that relate according to the changes made and the subsequent results. One important factor is the data filtering method used to smooth the curves on test graphs. Those smooth curves look impressive but in reality a “Zoom-in” of the data would reveal numerous peaks and valleys in the overall curve based on inconsistent fuel delivery, mixture quality, ignition scatter and other intermittent interference all affecting the quality of the measured power curve.

Dyno testing should never involve the pursuit of some magical maximum power number. The primary goal is to establish the health of the engine and identify the power band that the engine actually delivers. Dyno testing enables the identification of the optimum fuel and spark curves that produce the power band. If the engine flow paths are dimensionally optimized according to known mathematical principles the fattest possible power curve will naturally occur. It is important to remember that you are not racing the dyno. You are using the dyno to verify your mathematical efforts to shape and position the power band to suit you racing requirements. All too often dyno test results are accepted at face value without serious study or evaluation of the full range of data. If a few timing and jetting changes raise the power a bit many builders call it good without ever evaluating what they might be missing or how well the engine actually matched the predetermined performance blueprint.  If you have successfully planned your engine, the dyno will help you establish the optimum spark curve. As a rule ignition timing translates well from the dyno to the track, while the fuel curve will almost always be different due to the nature of atmospheric influences and how the engine is loaded in actual competition.  Use the dyno to verify your engine’s power band and map its characteristics. Then track tune the engine for maximum performance.