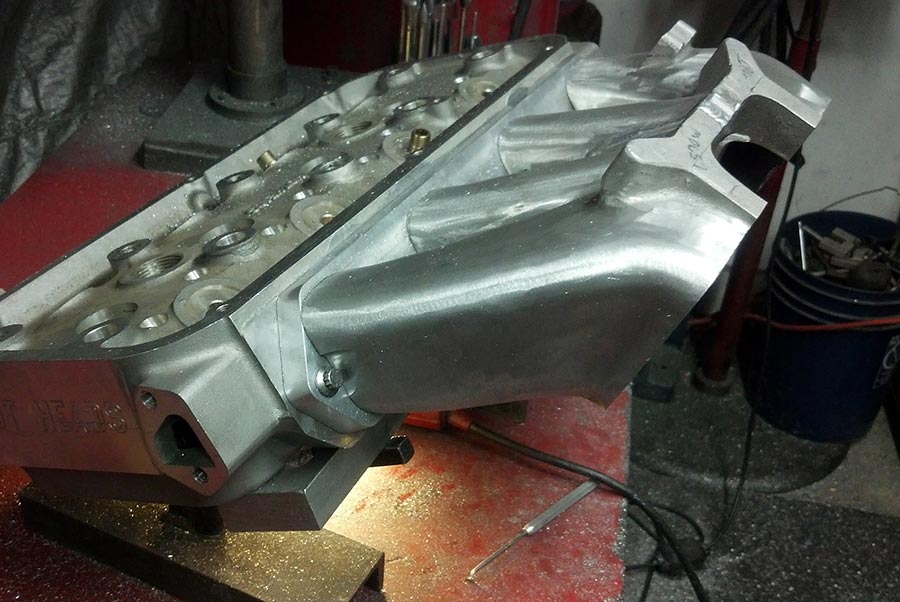 Performance gains offered by the current crop of tall runner single plane intakes are substantial in many cases. With a near line of sight path to the valve, the mixture is unencumbered by abrupt area and directional changes. Velocity is maintained and mixture quality is improved. Unfortunately a good version does not exist for early Hemis. To rectify that Adams turned to Engine Masters Challenge partner Nick Smithberg to fabricate a suitable prototype for testing.  Smithberg's special talents had already delivered strong performances in the EMC and on any number of high end custom applications. 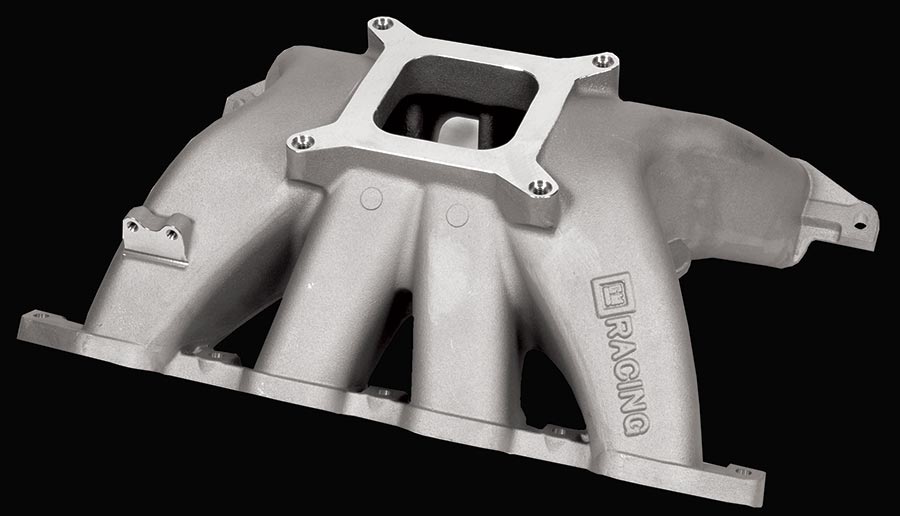 Smithberg examined  many existing manifolds to see if there was one that could be easily modified. There wasn't. But he noted that GM's racing intake for the NASCAR RO7 engine was very close in terms of runner angle and spacing. It seemed the best choice available so he got one and proceeded to chop it up. 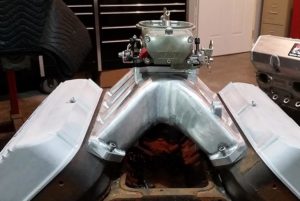 The accompanying photo sequence shows how the manifold was initially measured and checked on the Hemi engine. Then it was cut into quarters and spacers were cut to fill the space required to move the ports into proper alignment. The spacers had to be shaped and pinned in place prior to welding. A lot of thought went into making sure the runner angles and lengths were properly maintained and well matched to the Hemi port angles. Follow the sequence from left to right and down as the photos detail the prototype construction.  Click photo to enlarge

The intricate process of cutting this manifold apart and re-configuring it to fit an early Hemi was quite tedious and required considerable brainstorming before cutting metal. Among the critical tasks was maintaining proper runner to runner balance so the ports are all equal. The original GM intake comes with very small ports and it is meant to be custom ported. Smithberg was challenged to maintain optimum port alignment and entry angles, balance and equal cross sections in each port to ensure optimum power from every cylinder. This was no easy task in a manifold that had been severely modified.

Smithberg does this sort of thing all the time and Adams had great faith that the final product would perform well. The subsequent Dyno Test of this prototype proved its worth. As noted in that story, they are now regrouping to make the final product in two different runner sizes and as a two-piece intake to make porting easier for custom applications. This is how hot rodders used to build the parts they needed back in the day. Its still happening today as the pioneering old timers and new young guns join forces to build powerful new pieces that other hot rodders can use. That's quite encouraging, not just for Hemi fans, but for hot rodding itself.

With the success of the initial prototype, development is in full swing and we will bring you the full story as these pieces come available for Hemi owners anxious to apply them on the street and the race track.