EXPLORING FACTORY FUEL INJECTION OPTIONS FOR 348/409 W-ENGINES
Factory 348ci and 409ci Chevrolet engines were never equipped with OEM fuel injection, but that doesn't mean it never existed. In a bid to improve power and economy, GM engineering staff undertook extensive research on fuel injection options for W-motored cars and trucks back in the day. This research was conducted in the late fifties as you will note from the accompanying GM memos that circulated among the development engineers. Multiple vendors were invited to participate and one in particular was close to bewing selected when the project was shelved because the new design big blocks were about to come on line. 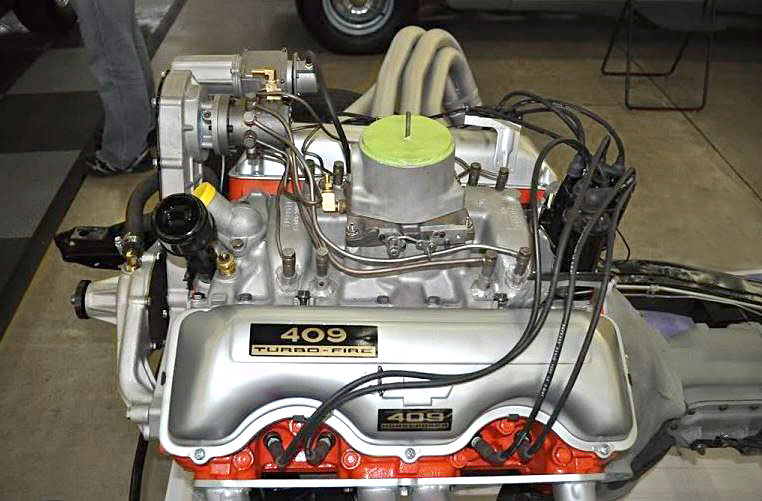 A while back, we ran a short story about a 409 fuel injection conversion created by engine builder John Beck at Vintage Hot Rod Design in Chico, California. He modified a dual quad intake manifold to accept a 327 Corvette fuel injection unit and the conversion proved quite successful. It made us wonder why the factory had never entertained the thought of fuel injection for the W-engine cars and trucks. To our surprise we soon received an e-mail from Pat Lobb, a Texas based Toyota dealer and GM collector informing us that he did in fact have a factory original fuel injection unit on his 409 powered '62 Bubbletop Impala and would we like to do a little follow up piece about it. Over the next week or two we exchanged information and photos as Pat revealed the amazing story of Chevrolet's fuel injection research program and how he came to be in possession of one of the rare test units. 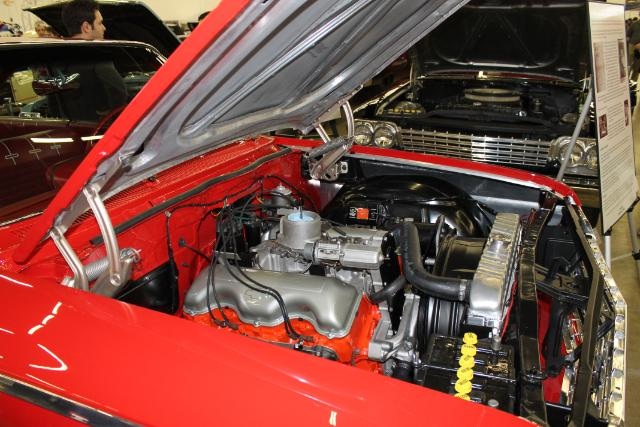 Pat Lobb's factory fuel injected 409 Impala bubbletop looks, well, factory in all respects. Here, the air cleaner is removed so you can see the fuel injection unit and air valve on top of the engine and the associated drive components at the front. 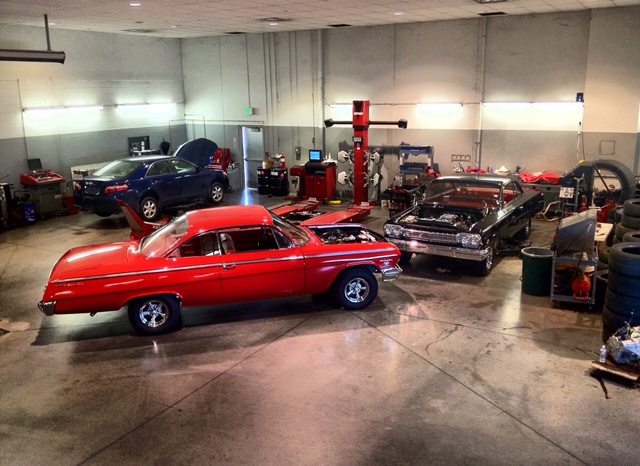 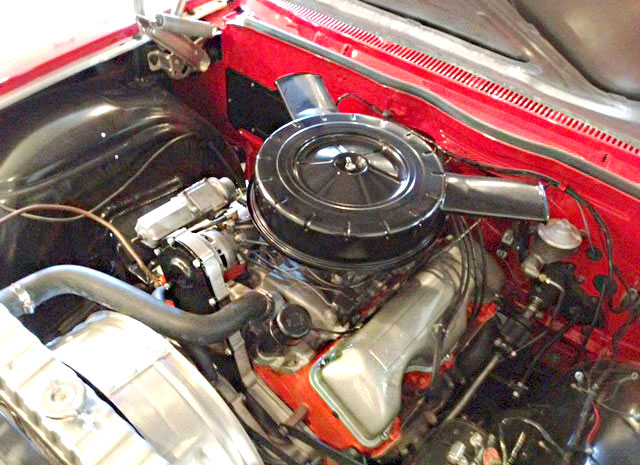 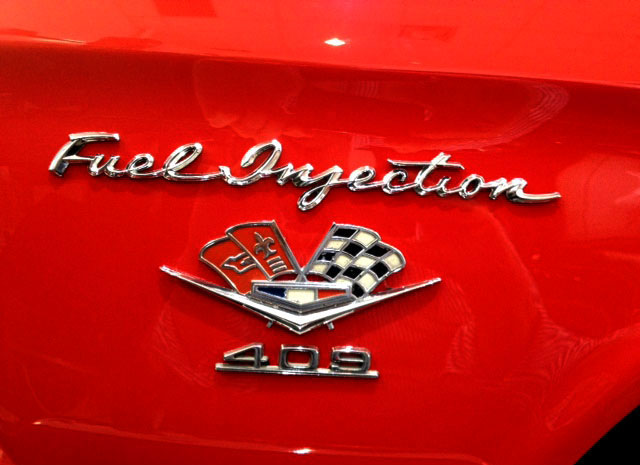 Here's is Pat's super clean 1962 Impala with an OEM factory port fuel injection unit acquired from the original GM test program. "I built the car as if this is how Chevrolet could have built a Fuel Injected 409 if they had kept the program." 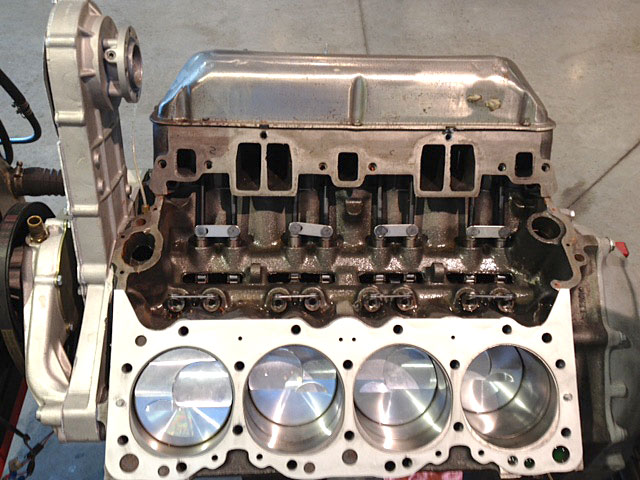 The chain driven injector pump is completely enclosed in an aluminum housing that incorporates spacer extensions on both sides to  to move the water pump forward. 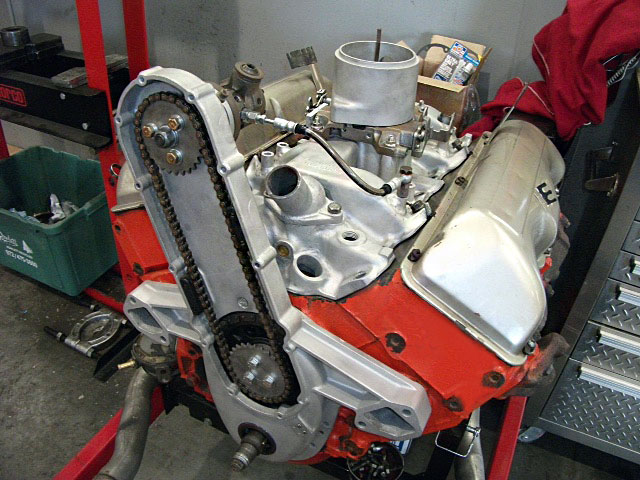 The chain driver is accessed by a bolt-on front cover. The water pump extensions are built-in as part of the aluminum timing cover. 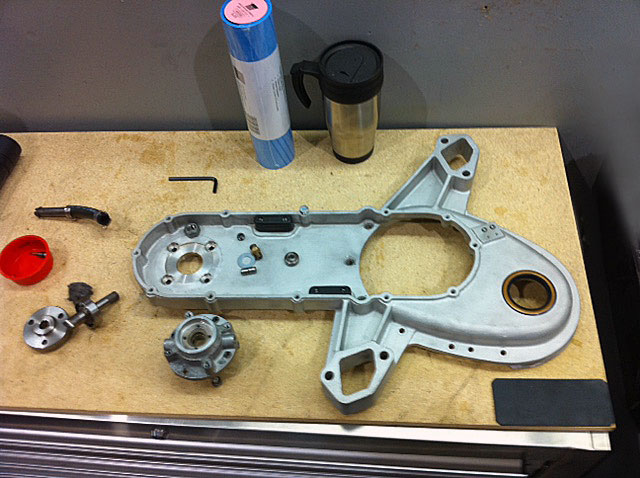 This layout shows the front cover and drive housing and the pump drive components that bolt-in at the top of it. 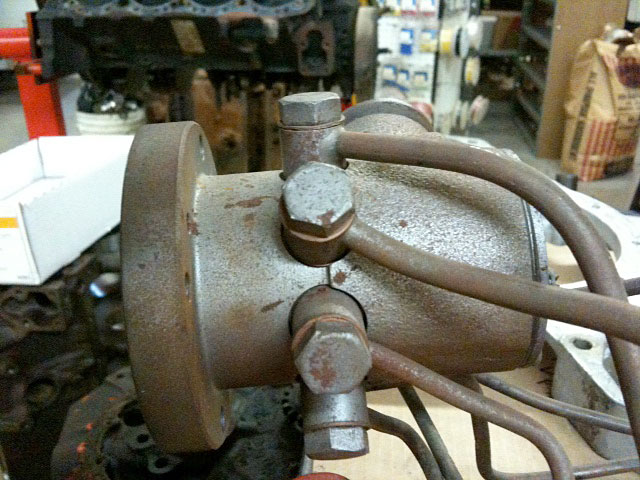 The injector pump incorporates eight individual feed lines; one for every cylinder.

Each company developed its own system independently according to guideline issued by the Chevrolet project manager. At the close of the initial design program all the different units were installed on test vehicles at a Detroit dealership under the supervision of development engineers who conducted driving evaluations.  You will see some of their comments in the memos shown at the end of this story. These have been reproduced at full scale so you can read them easily. 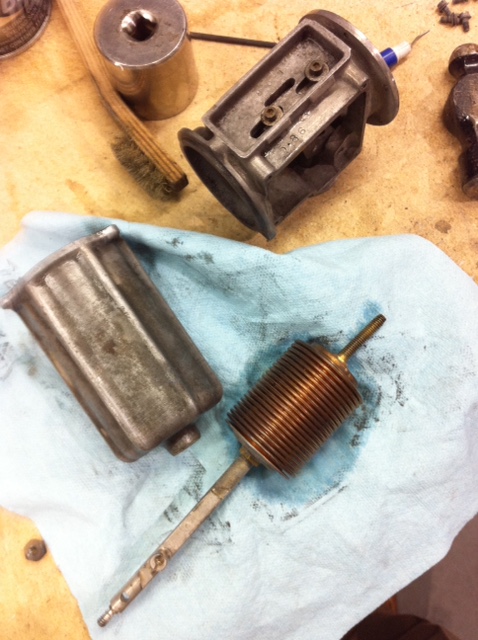 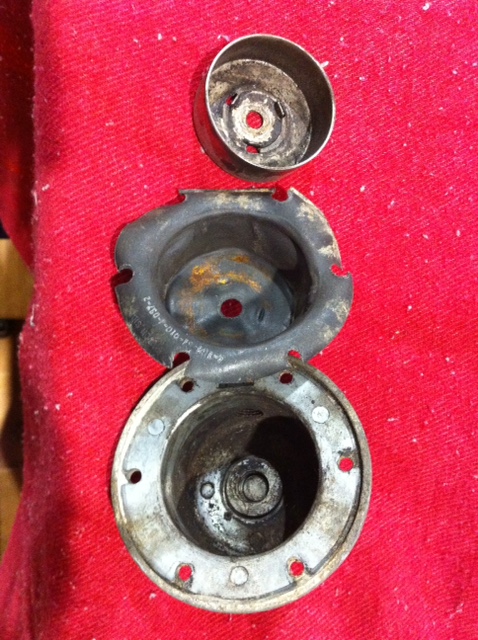 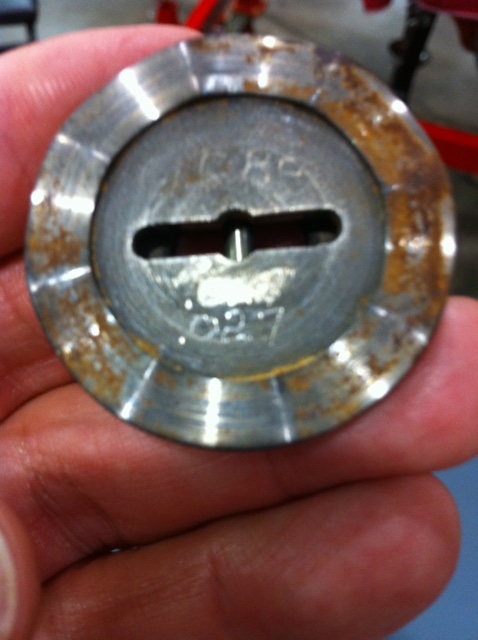 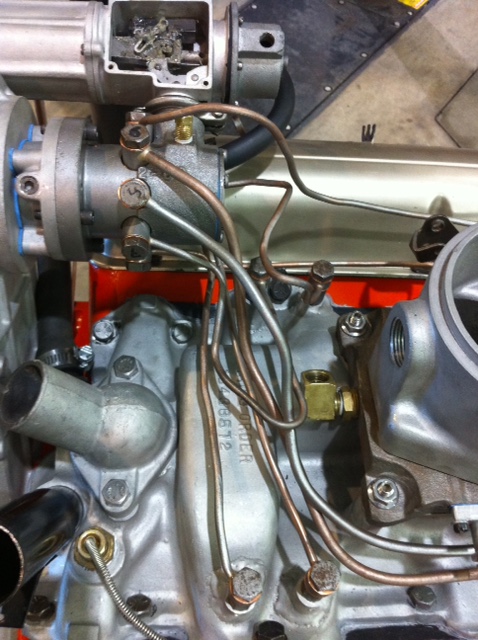 The pump system required careful rebuild and sourcing of rare gaskets. It delivers fuel to the appropriate cylinder in the firing order via individual hard lines to each intake port. Note that the fuel lines are of different diameters depending on the location of the cylinder and the length of the line.

Lobb acquired the Marvel-Schebler Products system that was installed on an Impala for test and evaluation. The story goes that one day an engineer brought the car back into the dealership with instructions to remove the fuel injection and return the vehicle to its carbureted configuration and scrap the injection unit.

The development group ultimately concluded that all the units were too expensive for the minimal gains they provided and the program was scrapped. The Chevrolet dealership mechanic  that was instructed to remove it placed it and all the spare parts in a box and stored it under his work bench because the Chevrolet engineer said it was to be scrapped.  After an extended period of time the mechanic cleaned out his work bench area and took it home. Fearing reprisals he wrapped it in Cosmoline and buried it in his back yard where it remained until a few years ago when he dug it up and offered it for sale. Lobb was Johnny on the spot to pick it up.

According to Pat it took a lot of research to track down all the facts about the system, but he was ultimately able to acquire copies of the GM  memos and discover the original vendor that produced the all important diaphragm for the control unit. After all this time the company was still in business and it was able to make him a brand new diaphragm. Then it became a matter  of cleaning, installing and timing the system which also included an original throttle body assembly. He says it drives quite well, but he can identify the  comments made by the evaluators at the time. There was a story going around that the engine made 444 horsepower back then, but Lobb has been unable to confirm it. The big block Chevy Mystery Motor had also begun development in early 1962 and in many ways that sealed the fate of the 409 W-motors with or without fuel injection. 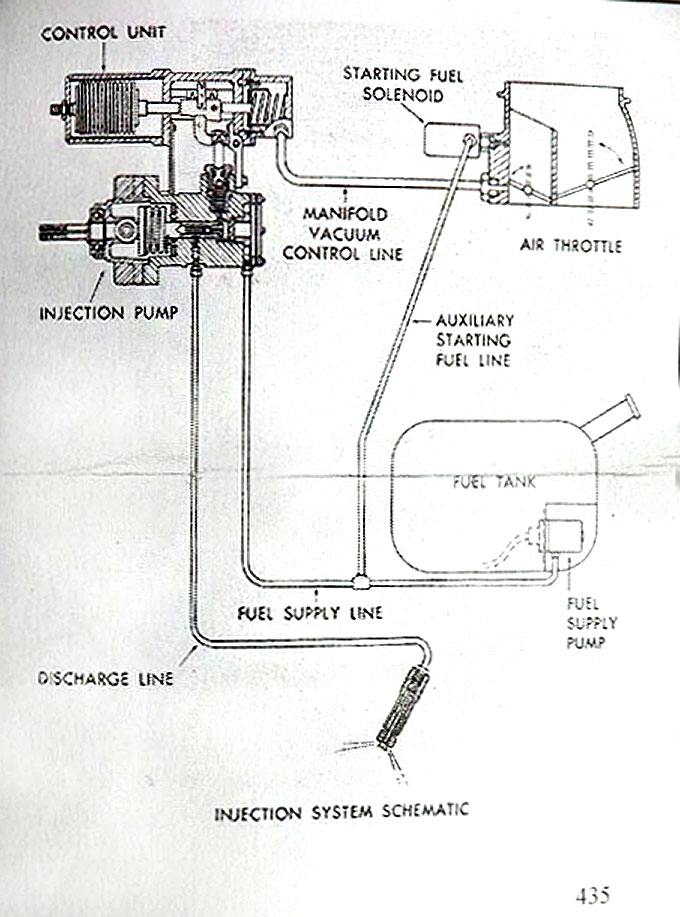 The system schematic shows the simple layout with starting fuel solenoid attached to the primary throttle plate and manifold vacuum line to the control unit. Readers will note the system shown here was deemed the best performing of the bunch, but the gains were not significant enough to bring it to production. Interestingly the system incorporated a high-pressure pump in the fuel tank and functioned with delivery nozzle pressures. Because it is fun for enthusiasts to read the original factory memos, Pat has provided them for everyone to see. The following memos are arranged in order so you can follow the evaluation notes. Click each photo to enlarge. 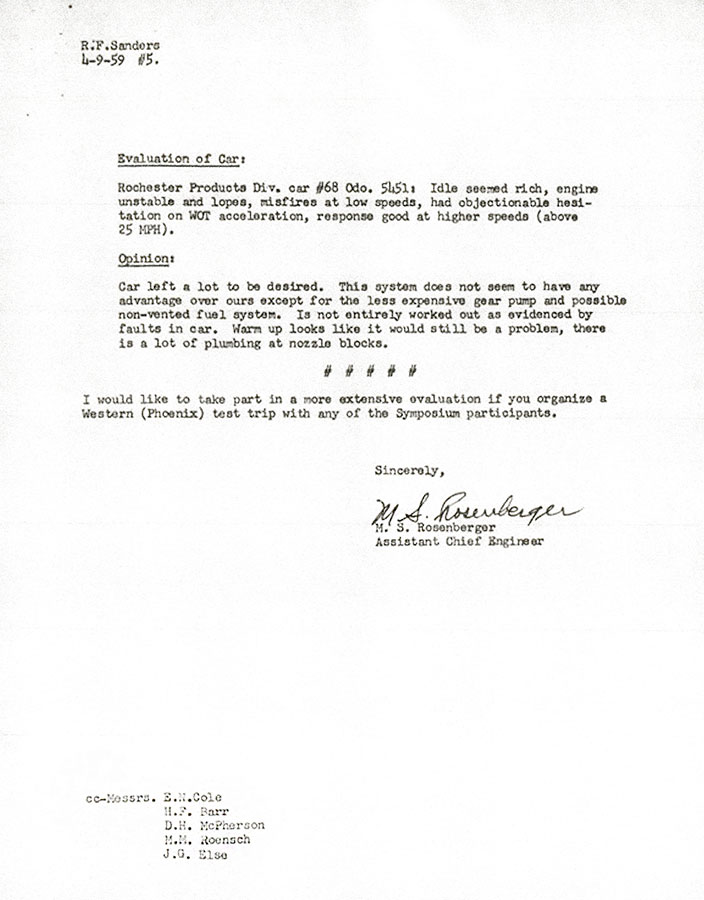 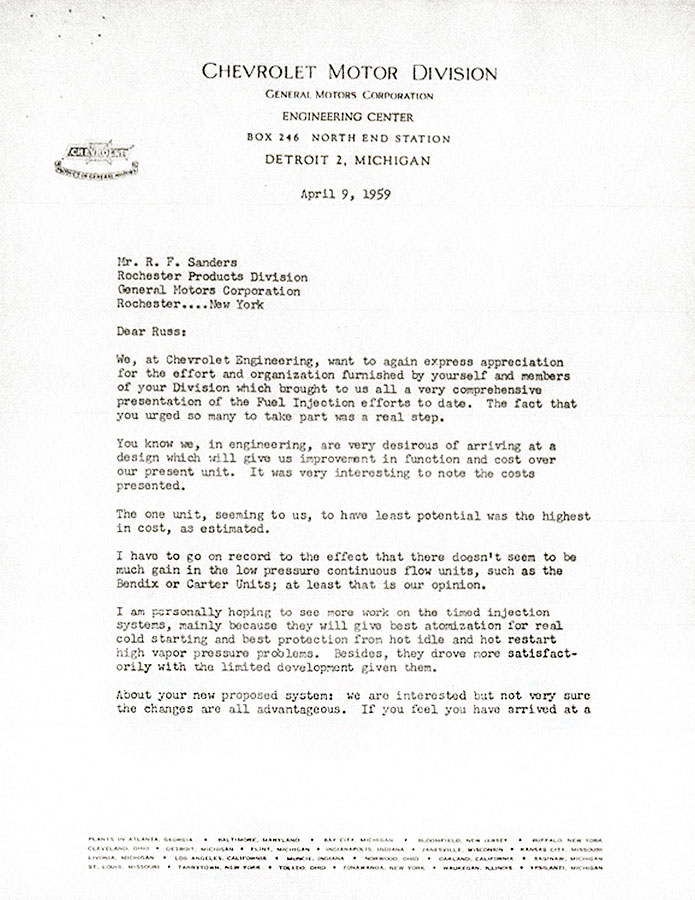 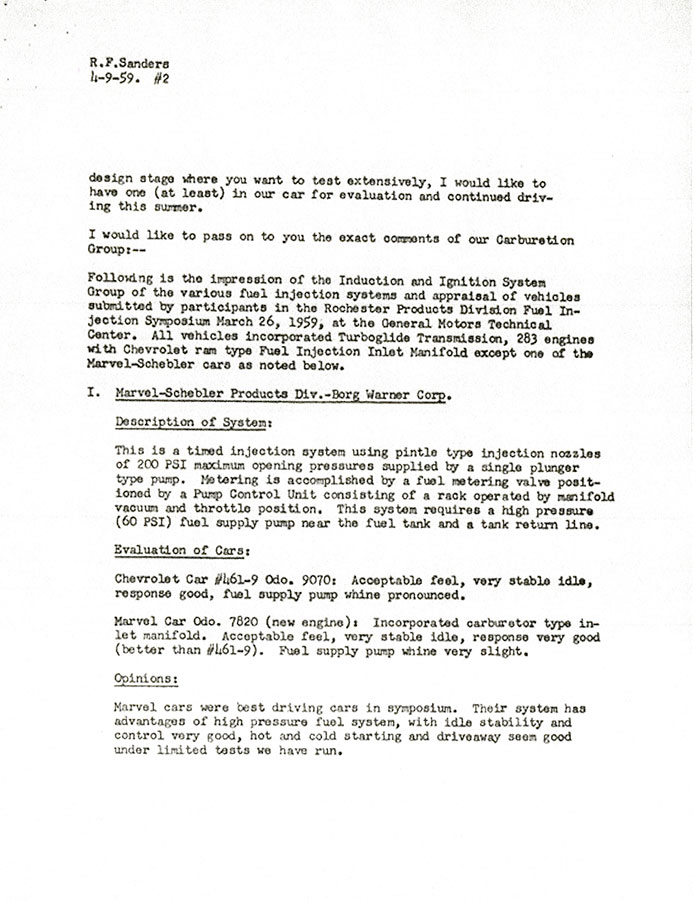 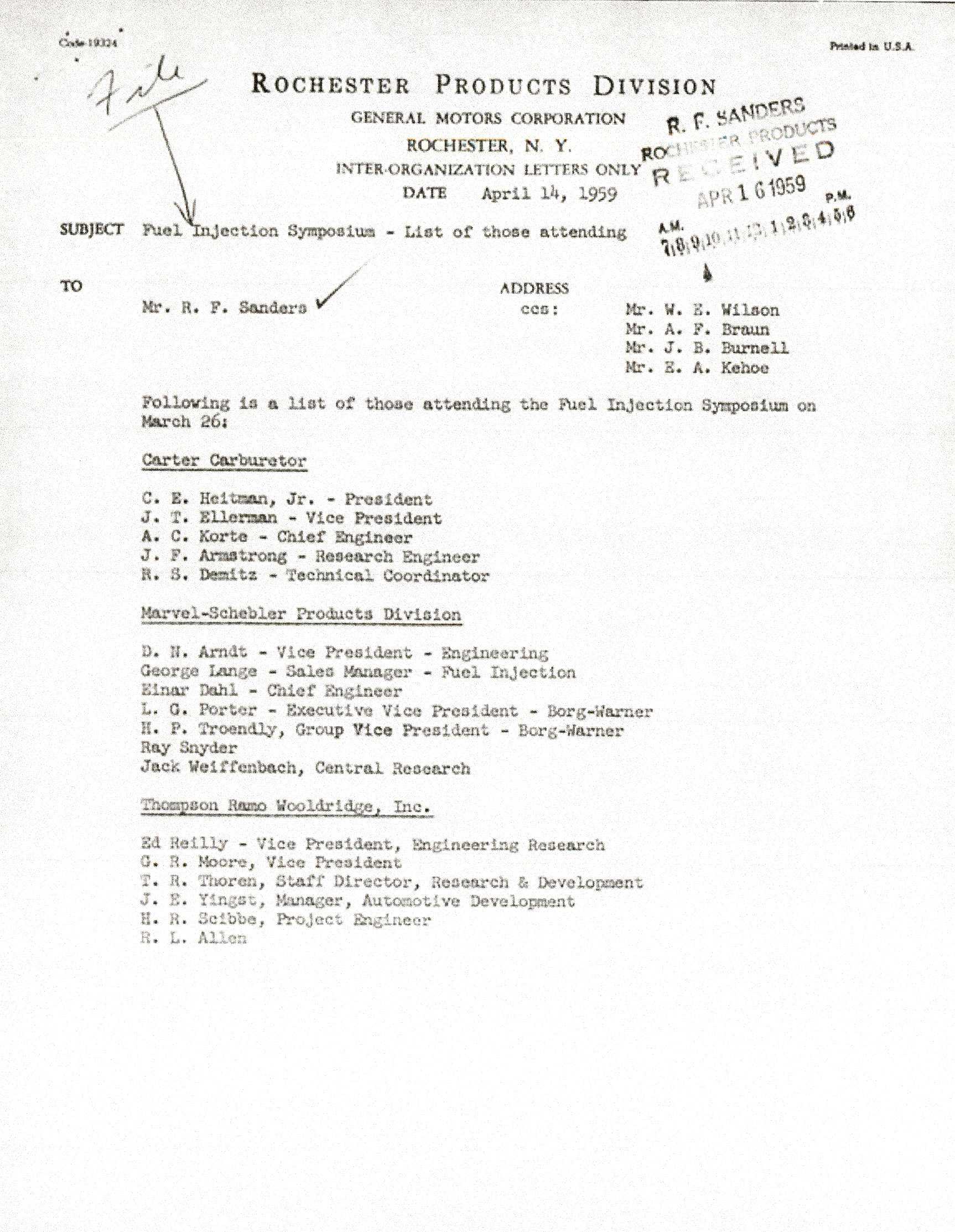 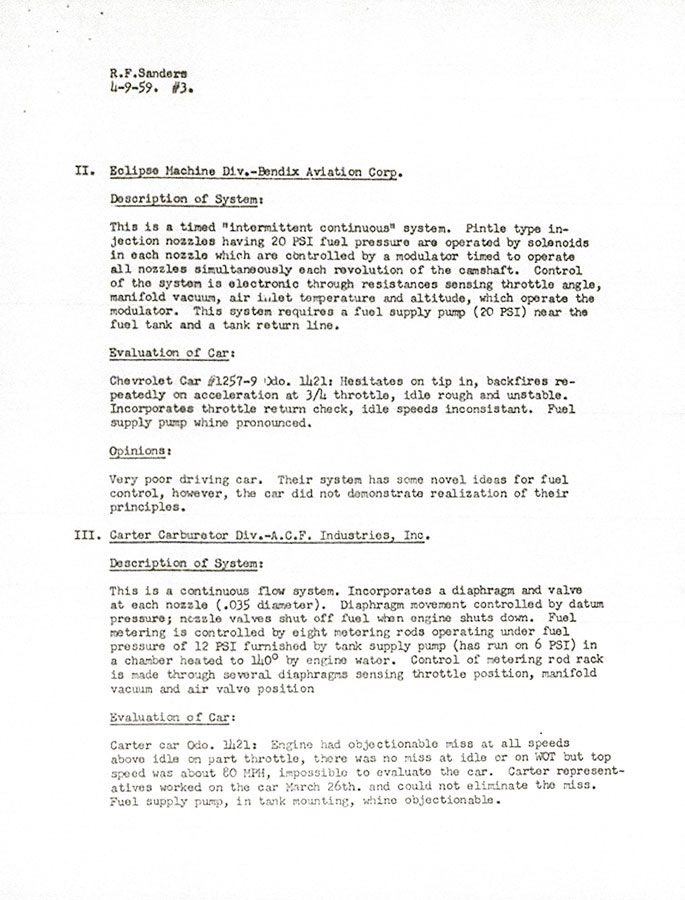 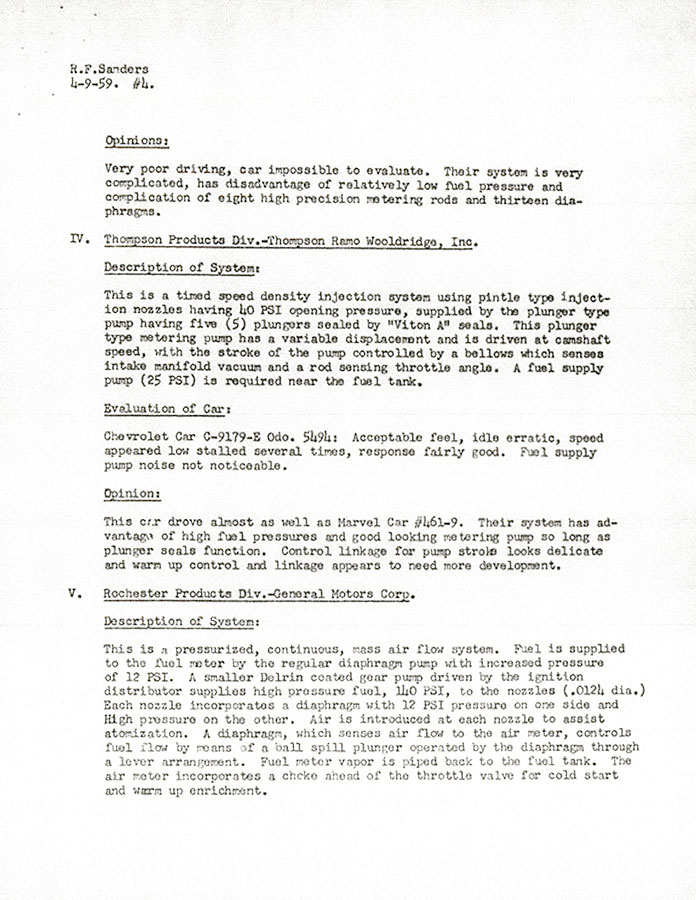 Synopsis of the fuel injection symposium evaluation results by M. Rosenburger, assistant chief engineer. Note this was in conjunction with the Rochester Products division that was already producing the Corvette fuel injection system. 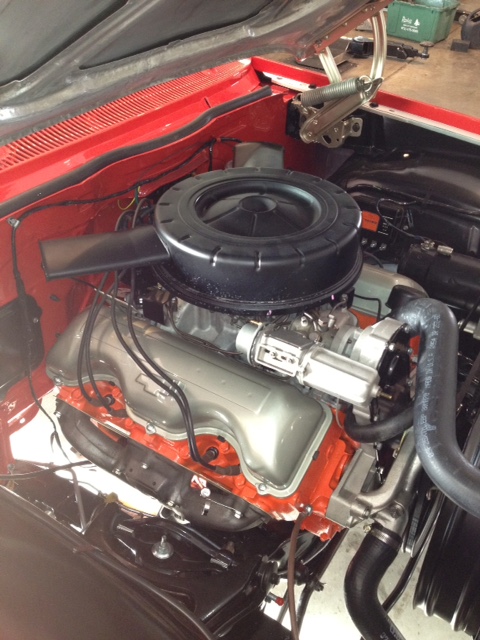 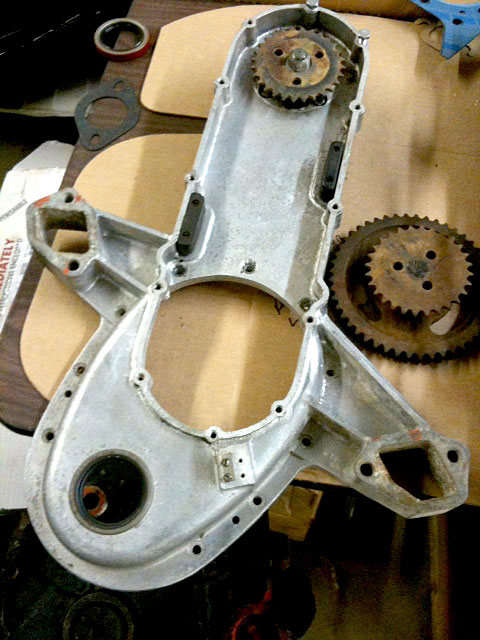 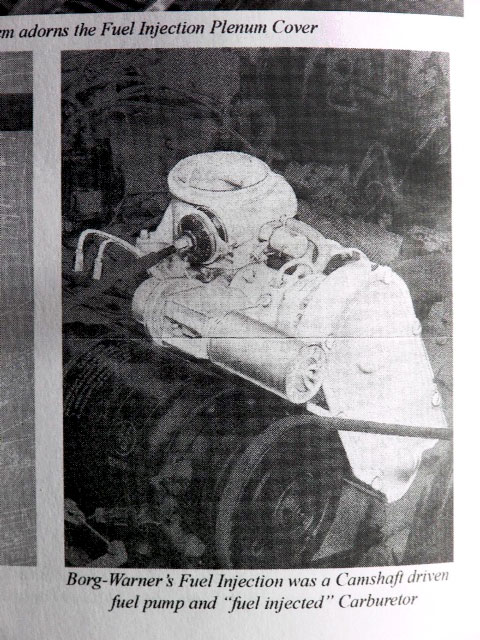 The ystem looks perfectly stock in the car. Imagine the triumph of discovering this one of a kind set up for your car. Here's a scan from a magazine article generated back in the 1959 time period. 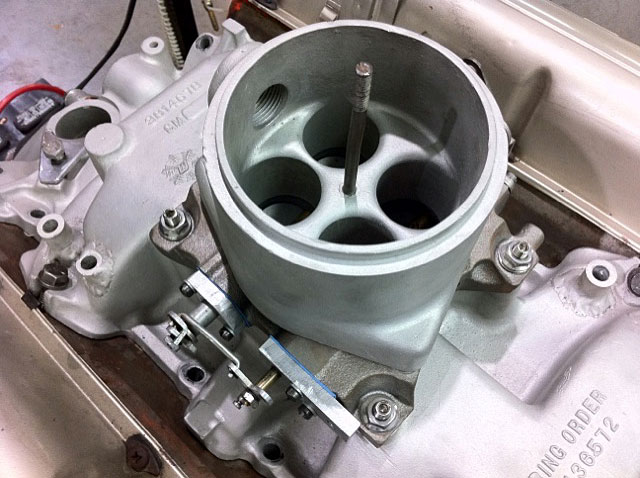 OEM throttle body with radiused inlets on GM factory aluminum fuel injection intake manifold.
Watch Pat's unique factory fuel injection system in action here.
Our thanks to Pat Lobb for his generosity in sharing this unique discovery with our readers and Chevy enthusiasts everywhere. Guys like Pat are on the front lines of tracking and rescuing rare and unusual factory development pieces that may have never seen a showroom, yet illustrate the depth of commitment the engineering staff had to bring this stuff to the program.