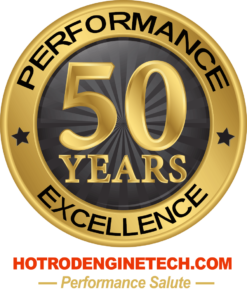 Fifty years ago this month Larry Ofria began porting cylinder heads in a run-down old chicken coup at the family property on Sherman Way in Reseda, California. Five decades later he is still at it and still living the dream. Larry and the engine savvy crew at Valley Head Service are recognized far and wide for their contributions to the advancement of high performance engine technology. To celebrate its milestone anniversary we thought it would be fun to take a closer look at Valley Head Service's long and colorful history. 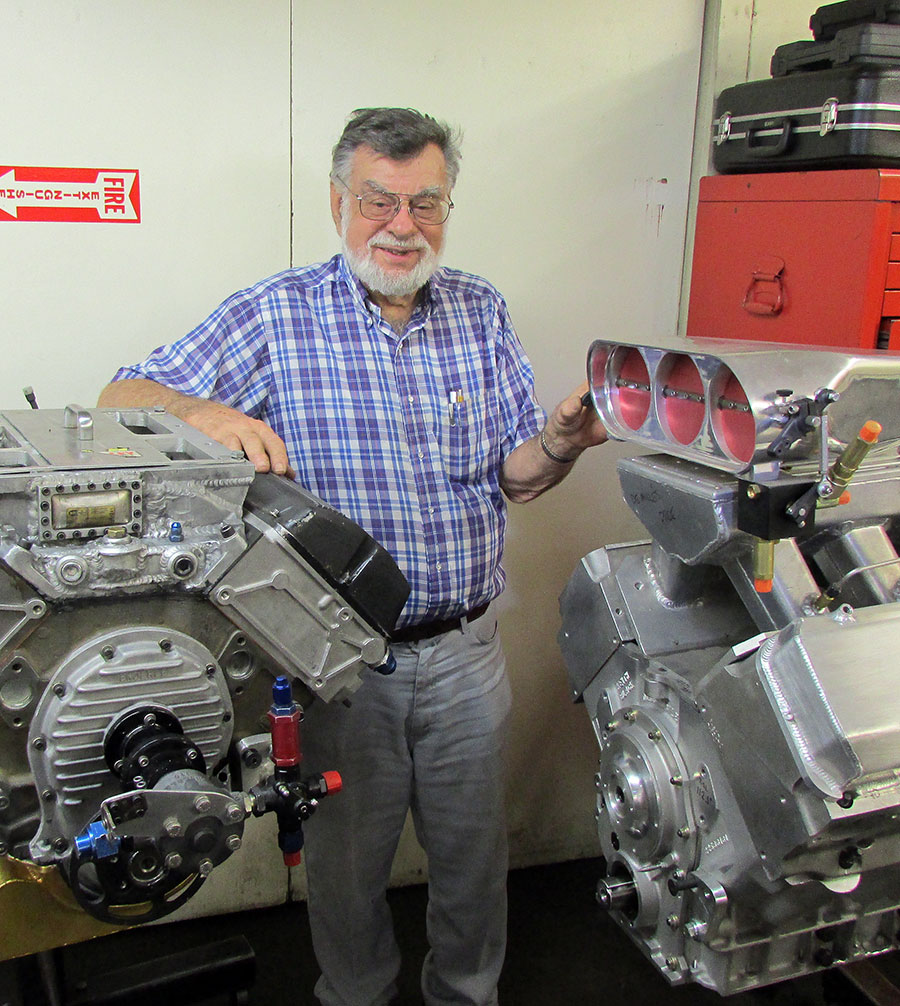 Ofria was working as a bearing analyst and his interest in cars and drag racing fostered an early recognition that cylinder head porting would become an essential engine building service for both street and racing applications. One of the first things he did was to approach Carroll Shelby's group about porting some heads. He waited for hours in the waiting room and the man he was supposed to see never came out to meet him. It didn't sit right with him so he went back again and a different  person agreed to try him out. They gave him a set of heads to port and specific instructions on what to do. He took them back to the old chicken coup and did it his way. They picked up 15 horsepower and a close bond was forged. 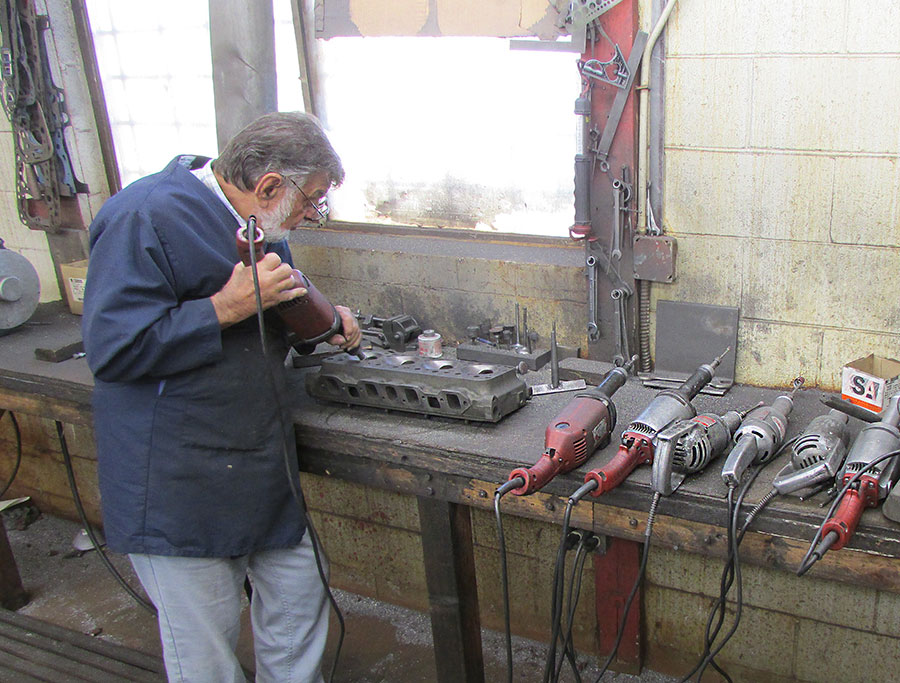 Trans Am racing in the sixties did not escape Ofria's influence as he ported cylinder heads for Jerry Titus's successful Pontiac Firebird effort and the dogleg heads for Ronnie Kaplan's AMC cars. In the mid-seventies Ofria was already developing Pro Stock heads with Warren Johnson and the accompanying letter from WJ's publicist speaks to the success of those efforts.

A close relationship with noted racer Jim Hall and
the Chaparral racing team evolved into an intense development program for cylinder heads and injector manifolds and the early development of the D-shaped exhaust port for the small block Chevys that ran in the early Chaparral cars. During this time they also developed specific cylinder heads for the small displacement Formula 5000 series and they won the first ever Long Beach Grand Prix Formula 5000 race with Brian Redman driving.

Today Valley Head service still does specialty machining and engine rebuilding for the nearby Nethercutt Collection of rare classic cars. And before much of the work was brought in house, VHS did a great deal of precision cylinder head and engine building work for Jay Leno's Garage.

A pass through some of their engine build photo albums reveals a very rare 1913-14 Peugeot Grand Prix engine; one of the first ever dual overhead cam, four valve per cylinder race engine and effectively the forerunner of the Miller, Offenhauser and subsequent modern racing engines.

Through the years Valley Head Service remained close to Larry's first love of drag racing; sponsoring and campaigning various dragsters, Funny Cars and sportsman racers in and around southern California. In addition to a number of partial sponsorships, VHS maintains and campaigns a pair of hard charging sportsman cars; an A/Gas blown alcohol '57 Chevy with a 388ci small block Chevy and a A/Gas blown alcohol '69 Camaro sporting a 475ci big block Chevy with the VHS developed 4-valve per cylinder, Thunder Power cylinder heads.

Over the years VHS has worked with and supported many of the biggest names in the business including Carroll Shelby, Dan Gurney, Bud Moore, Holman and Moody, Willie Borsch, Bill Stroppe, George Follmer and the list goes on and on. Another measure of VHS's  far reaching influence is the number of former employees who went on to start successful performance businesses of their own. They include Pete Incaudo of Cylinder Heads West, Ken Sperling, founder of Air Flow Research, Charlie Slover of Slover's Porting Service and numerous others.

One of the key elements to any successful engine shop is competent employees that do not require constant supervision. Valley Head Service shines in that department. Ofria is quick to credit his wife Kim and the tech savvy crew of machinists and engine builders with much of the shop's continued success. Back in the shop, Alex and Ruben Pulido manage all the machining tasks while master builder Spike Morelli performs the detailed assembly work. After all these years, Larry still does the porting work.

A large percentage of the current workflow through the shop is devoted to southern California hot rodders and drag racers participating in the many nostalgia racing events that are popular on the west coast. A steady flow of vintage engine projects currently includes a1927 Rolls Royce, a 1917 American Lafrance and a 1952 Seagrave fire truck engine. These projects often require special attention such as making bearing inserts where there are none to be found. They also still perform some R&D work for General Motors as required.

After 50 years in business, Valley Head Service remains one of the leading specialty engine shops in the nation with a list of top performers and celebrity customers that is nowhere close to finished. We salute their golden heritage and look forward to seeing many more performance firsts from this legendary racing engine shop.

Please scroll down for more great photos from the Valley Head Service archives.
Shelby heads and shop crew photos by A. Furgie 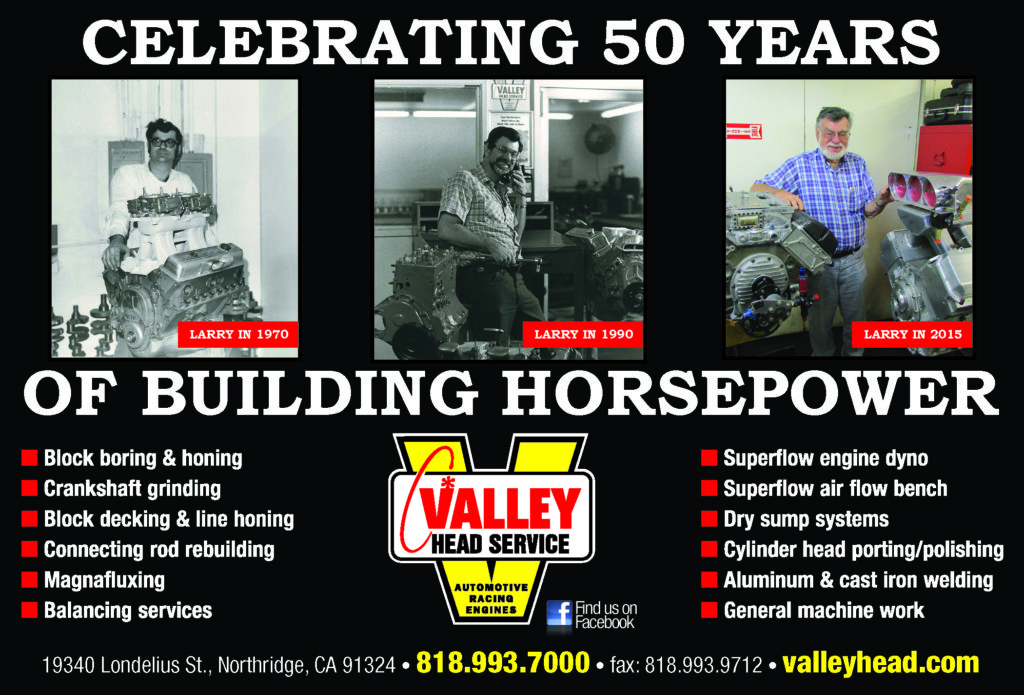