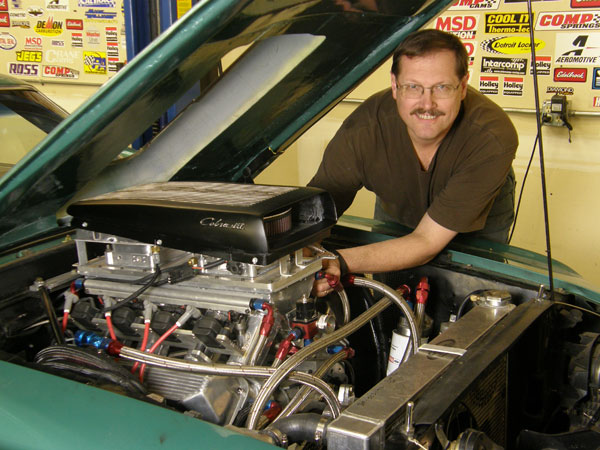 Ford FE engine fans who haven' t read Jay Brown's book The Great FE Intake Comparo have missed out on the all time best Ford FE intake manifold mass dyno test wherein Jay tests every FE intake manifold ever made. Visitors who read our review in the Book section raved about the depth of information provided. It has become a frequently visited page on this site so we asked Jay if he would provide some more insight about FE engines, their basic specs, characteristics and best paths to power. He gracefully obliged us and his comments are presented here for your information and enjoyment. 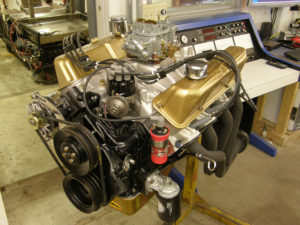 HRET:  The FE engine is currently enjoying a resurgence in popularity, probably due to their place in ‘60s muscelcars.  But FEs were used in lots of non-performance vehicles, too, and there seems to be an unlimited variety of these engines.  Can you walk us through all the differences?

JB:  Ford built FEs from 1958 through 1976, in a wide variety of configurations.  Displacements included 332, 352, 360, 390, 406, 410, 427, and 428.  From a performance perspective the best known engines are the 427s found in the original 427 Cobras, Galaxies, Fairlanes, and Cougars, and the 428 Cobra Jet engines found in 68-70 Mustangs, Fairlanes, and Torinos.  Complicating the picture are the multiple head configurations for these engines, referred to as Low Riser, Medium Riser, High Riser, Tunnel Port, and SOHC (Single OverHead Cam).  Most production engines got some variation of the Low Riser style heads, but some production 427s got the Medium Riser variety.  The High Risers, Tunnel Ports, and SOHC heads were only available over the parts counter from Ford, and never made it into a mass production vehicle.  Development of these specialized heads was driven primarily by Ford’s participation in NASCAR and drag racing during the 1960s. 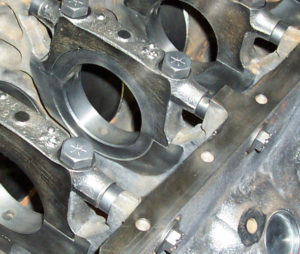 HRET:  We’ve seen FE blocks with different casting numbers on them; for example, a lot of blocks have “352” cast in, some say “DIF”, and we’ve seen other markings as well.  Is there any way to tell FE engines apart using these markings?

JB:  The short answer is no. Most FE blocks used universal casting patterns for the block exterior, so just looking at the cast-in markings on the block won’t tell you what you’ve got.  You need to measure the bore and the stroke to know for sure.  The exception is the 427 block, and also some late 406 engines built in 1963.  These engines feature cross-bolted main caps, and are easily identified by the three bolt heads on the outside of the block, about an inch above the pan rail on each side.  Also, from ’65 to ’68 the 427s got a revised oiling system referred to as the “sideoiler”.  These engines have a long oil passage running down the left side of the block, just above the cross bolts.  The block is bulged out to accommodate this oil passage, and there are pipe plugs in this bulge, so a sideoiler is easily identified.  Unfortunately, the vast majority of FE engines are not 427s, so in most cases the bore and stroke must be measured to determine what you’ve got. 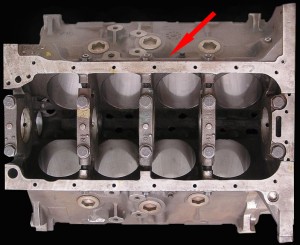 HRET:  Speaking of the side-oiler, we’ve heard that certain oiling modifications are required for performance FE engines.  What would you recommend along these lines?

JB:  The standard FE oiling system sometimes gets a bad rap, and this is largely undeserved.  The big issue is making sure the oil pump pickup has oil around it.  Running at least 6 quarts of oil rather than the factory 5 quarts, increasing the oil pan capacity, adding a windage tray to keep the crank from whipping up the oil in the pan, and restricting oil to the rocker shafts are the major steps that should be taken to resolve this issue.  Running a high volume oil pump, using the factory’s good oil filter adapter and increasing the size of the block oil passage from the pump to the adapter are also good moves.  One word of caution on using a high volume pump is that there have been reports of cases where a high volume pump has “pumped the pan dry” at high engine speeds, causing oil starvation.  I’ve never experienced this, but certainly a high volume pump shouldn’t be installed with no other changes; adding additional oil capacity and restricting oil to the rocker shafts should be performed at the same time.  Based on the oiling system tests in my book, The Great FE Intake Comparo, 2-3 quarts of oil are circulating in the engine when it is running, and the level of oil in the pan drops significantly during a dyno pull.  The same thing, plus the effect of acceleration forces, is happening when the engine is in the car.  You have to be aware of this, and buttress your FE’s oiling system accordingly. 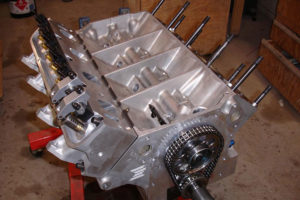 HRET:  A friend of ours changed a cast iron FE intake manifold the other day and says he just about broke his back.  Why are these engines so heavy?

JB:  In fact FEs are not that heavy; they weigh less than big block Chevrolets and 385 series Ford big blocks.  A complete cast iron 428 Cobra Jet weighs about 650 pounds, and a typical performance FE with aftermarket aluminum heads, water pump,  and intake manifold, plus steel tube headers, comes in at just under 500 pounds.  FEs probably get the reputation for being heavy because about 25% of the cylinder head is included in the intake manifold casting; the pushrods go through the intake, and it also contains part of the valve cover rail.  Without realizing that, someone who picks up a cast iron FE intake and compares it to a 385 series Ford cast iron intake is probably going to draw the wrong conclusion about the weight of the engine.  The upside of this situation, from an FE owner’s perspective, is that changing to an aluminum intake manifold gives a really large weight savings as compared to most other engines, typically in the neighborhood of 55 pounds!

HRET:  One easy way to increase horsepower is to increase the cubic inches of the engine.  What are the options for a big cube FE?

JB:  The first limit that must be considered with a big cube FE is the bore size.  It is safe to assume that you can bore a stock FE block 0.030”, but anything over that should only be considered after a sonic check.  With some 390 blocks (4.05” bore) you can get away with boring them to 4.13”, which is the 428 bore size, but again you need to exercise caution when doing this.  FE blocks often exhibit core shift which makes boring to large sizes very dangerous.  You should shoot for a minimum wall thickness of 0.125” if possible.  427 blocks are cast with the largest bore size, 4.233”, which makes them the most desirable from a big cubic inch perspective.  Aftermarket blocks can go bigger, up to about 4.400” in some cases; they are available from Robert Pond Motorsports, Shelby, and Genesis.  Bore spacing on the FE engine is 4.630”, and in the end this is the limiting factor for bore size. 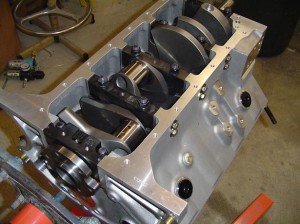 On the crankshaft side there are now a variety of stroker cranks available for the FE.  The 4.25” stroke cranks are the most popular, and give a big increase in displacement compared to the stock 390/427 3.78” stroke or the 428 3.98” stroke.  Complete stroker packages are available from a variety of sources, including Survival Motorsports, Blair Patrick Racing, and Precision Oil Pumps.  These packages will typically feature a crankshaft ground with big block Chevrolet rod bearing sizes, and a BBC rod that is longer than the stock FE rod, along with a custom forged piston.  Replacing the stock FE rod bearings with the smaller diameter, wider BBC bearings also improves the load carrying capacity of the  bearing, which is important in any performance application.  The limits to stroking the FE come when the shoulders of the connecting rod start hitting the cam, which is somewhere between a stroke of 4.375” and 4.500”, depending on the rod and the cam. Note that on the SOHC engines, this limitation does not exist because the cams are in the heads, not the block, so larger stroke SOHC engines are possible.

HRET:  OK, it sounds like displacement increases are no problem.  Are heads available to keep up with the bigger displacements?

JB:  Yes. Edelbrock and Robert Pond Motorsports both make excellent aluminum heads, patterned after the 427 medium riser heads.  Several varieties are available with different port and chamber options, including Edelbrock’s “pro-port” version, where a CNC porting program can be used to get flow numbers in excess of 370 cfm from the heads.  Blue Thunder also makes some excellent FE heads in both medium riser and high riser configurations.  Survival Motorsports is also set to release a new set of medium riser style cylinder heads very soon.  And for the SOHC crowd, Robert Pond Motorsports also has SOHC heads available.  A 600-700 horsepower FE is readily achievable using these components, and 500 cubic inch engines over 900 horsepower are possible with the best components.

HRET:  So intake manifolds are also available to support those kinds of power levels? 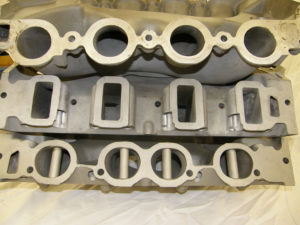 These intakes show the three different port configurations for FE racing heads available from Ford in the 1960s. The high riser port (middle intake) raised the roof of the standard FE port for improved flow. The SOHC intake (top) eliminated pushrods, so the port could take a direct shot at the valve for even better flow performance. After the SOHC was ruled out of NASCAR, Ford returned with the tunnel port (bottom), which kept the round port and direct shot at the valve, but required a tube through the intake port to house the pushrod.

JB:  Ah, my favorite subject!  Just about any intake manifold you can imagine has been produced for the FE over the last 50 years, including single four barrel (4V), dual four barrel (2X4V), tri-power intakes (3X2V), crossrams, tunnel rams, 6X2V Stromberg setups, 4X2V Weber setups, and even an adapter manifold that allows use of a 351 Cleveland intake on the FE.  Not all of these intakes are still available new, and in some cases they are very scarce, but generally the best intakes are still readilyavailable.  Edelbrock’s Victor intake or the factory Ford 2X4V “tunnel wedge” intake are typical choices for high horsepower engines, while the factory medium riser dual plane 2X4V intake (or Blue Thunder’s version) is down just a little on horsepower, but up on mid-range torque.  Edelbrock’s Performer RPM intake is probably the best all around single four intake available for a 450-600 horsepower FE, but Blue Thunder’s single four dual plane intake or the factory medium riser, police interceptor, or Cobra Jet intakes are also very good.  With all these choices it’s no problem to find an FE intake that looks great and performs like a champ at any horsepower level.  If you want all the details, pick up a copy of my book.

HRET:  One last question.  We know a guy with a 302 in a ’69 Mustang who is thinking about swapping to an FE, but his friends are all telling him to build the small block instead. What’s your advice?

JB: Tell him he needs new friends.  He can find them in the forum section at www.fepower.net.

HRET: Readers who enjoyed this article are urged to visit Jay's web site and get a copy of his book, The Great FE Intake Comparo for more FE power tips and an in-depth dyno evaluation of all the FE intake manifolds.