THE RESURRECTION OF AMERICA'S SPEED KING WITH THE WORLD'S FASTEST HEMI ENGINES
The new Goldenrod book by author John Baechtel details the the restoration of Americas most famous land speed racing car. Built by the famous Summers Brothers who set and held the wheel driven, piston powered land speed record and held it for 45 years, they accomplished this 409 mph record feat with superior aerodynamics and the massive power of four methanol breathing Chrysler Hemi engines. This acclaimed work has been praised far and wide as the best book ever written about Bonneville racing and the World's Land Speed Record. It provides extensive coverage of the Summer's Brothers early record cars that were all Hemi powered. These included a variety of early roadster and the famous 300 mph Hemi Powered Pollywog. And it delivers a deep dive look at how the new 1964 Chrysler Race Hemis were modified to suit the trying conditions of Bonneville's legendary five mile dyno; fuel injected Race Hemis on methanol at wide open throttle for five miles running as fast as 425.99 mph. Here's a quick peek inside this landmark book. 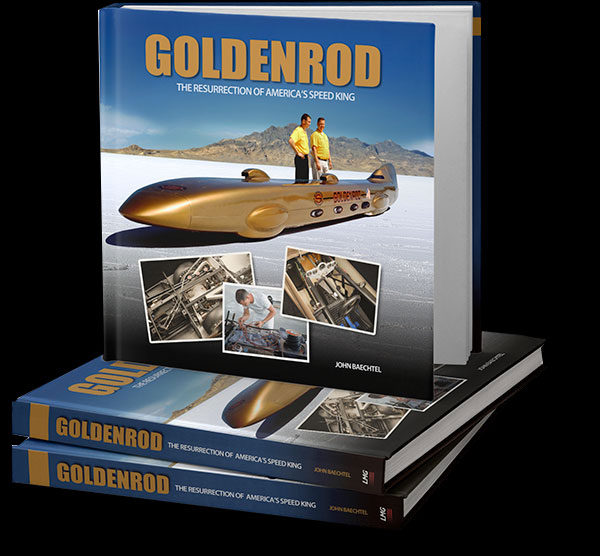 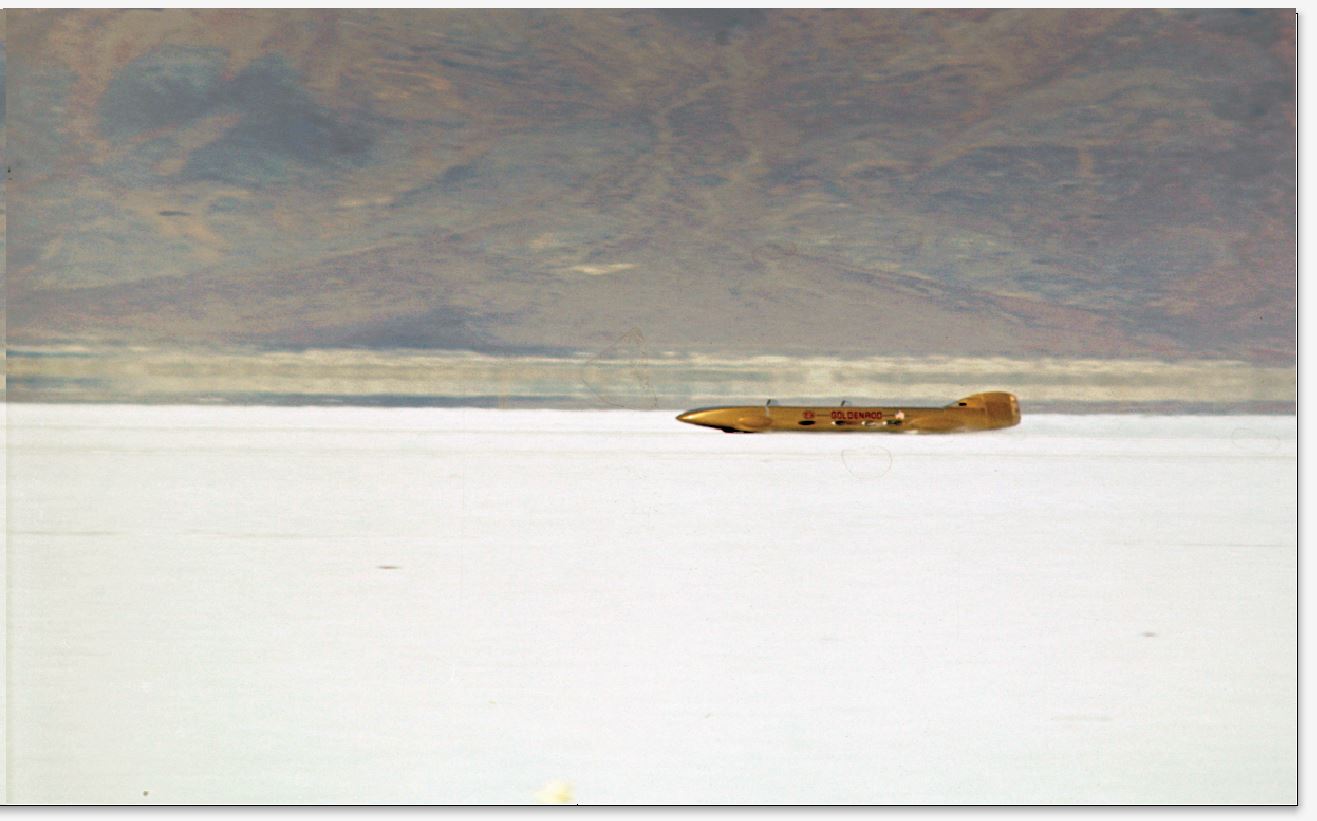 Goldenrod's return run for the Land Speed Record This photo is often seen backwards on the internet. This is the correct north to south orientation so you can read the name Goldenrod on the car. 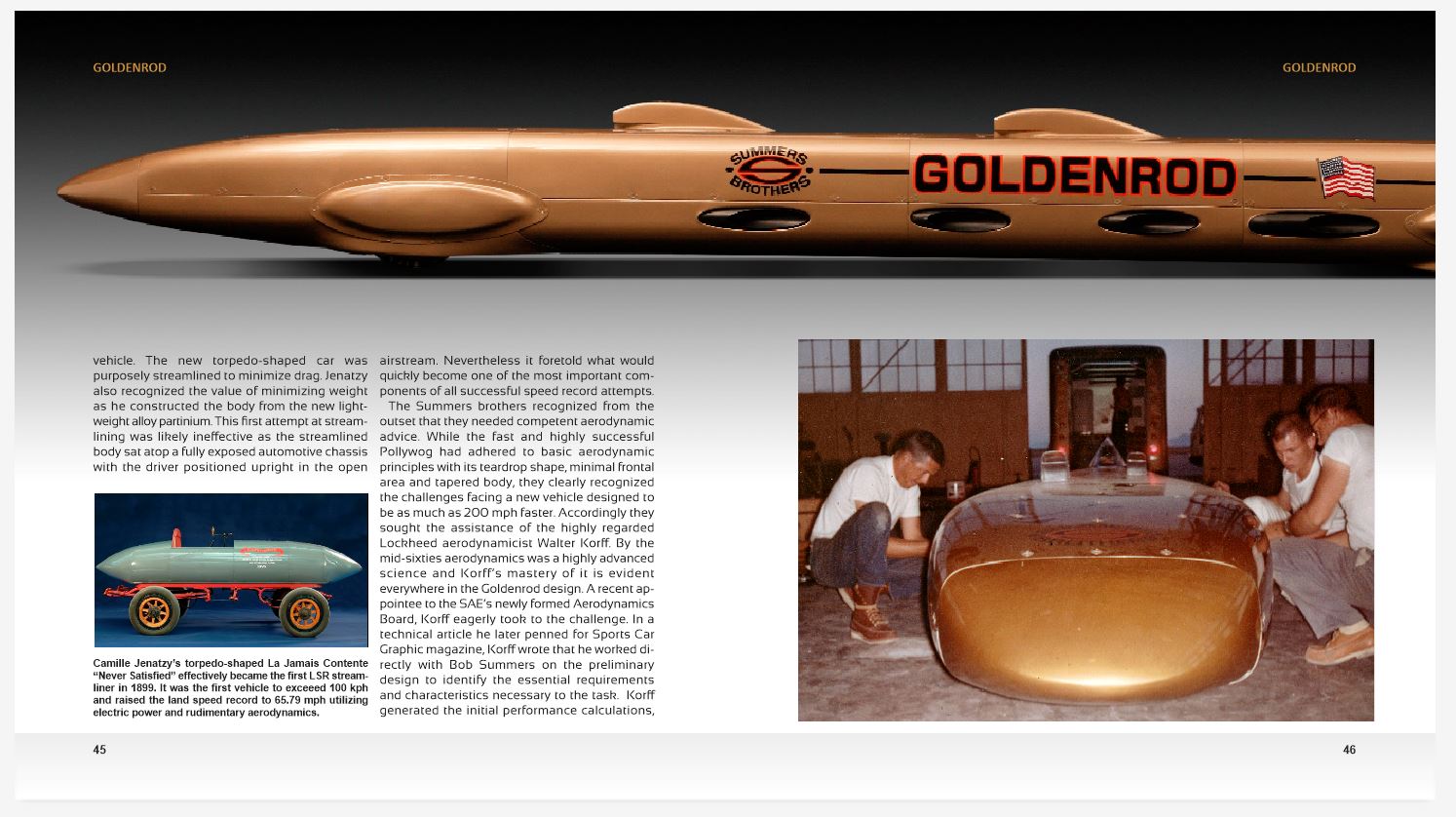 Goldenrod, the most aerodynamic car ever is seen here compared to the streamlined car from 1899, Camille Jenatzy's torpedo shaped electric car. The other inset shows the boys working on the car in the hangar at Wendover Field. 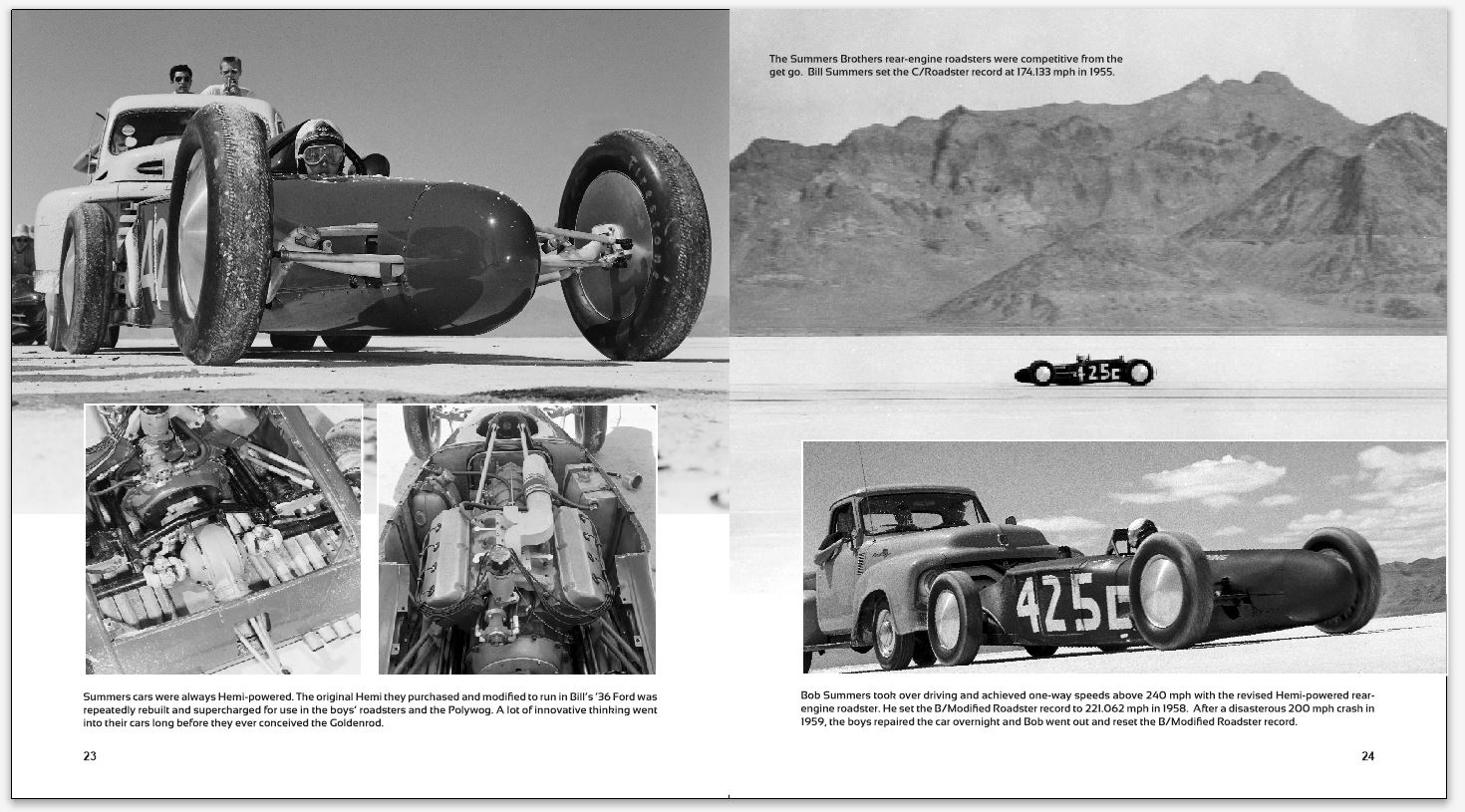 Prior to the Goldenrod, the Summers Brothers awesome roadsters were blindingly fast, running as quick as 240 mph in the late fifties. 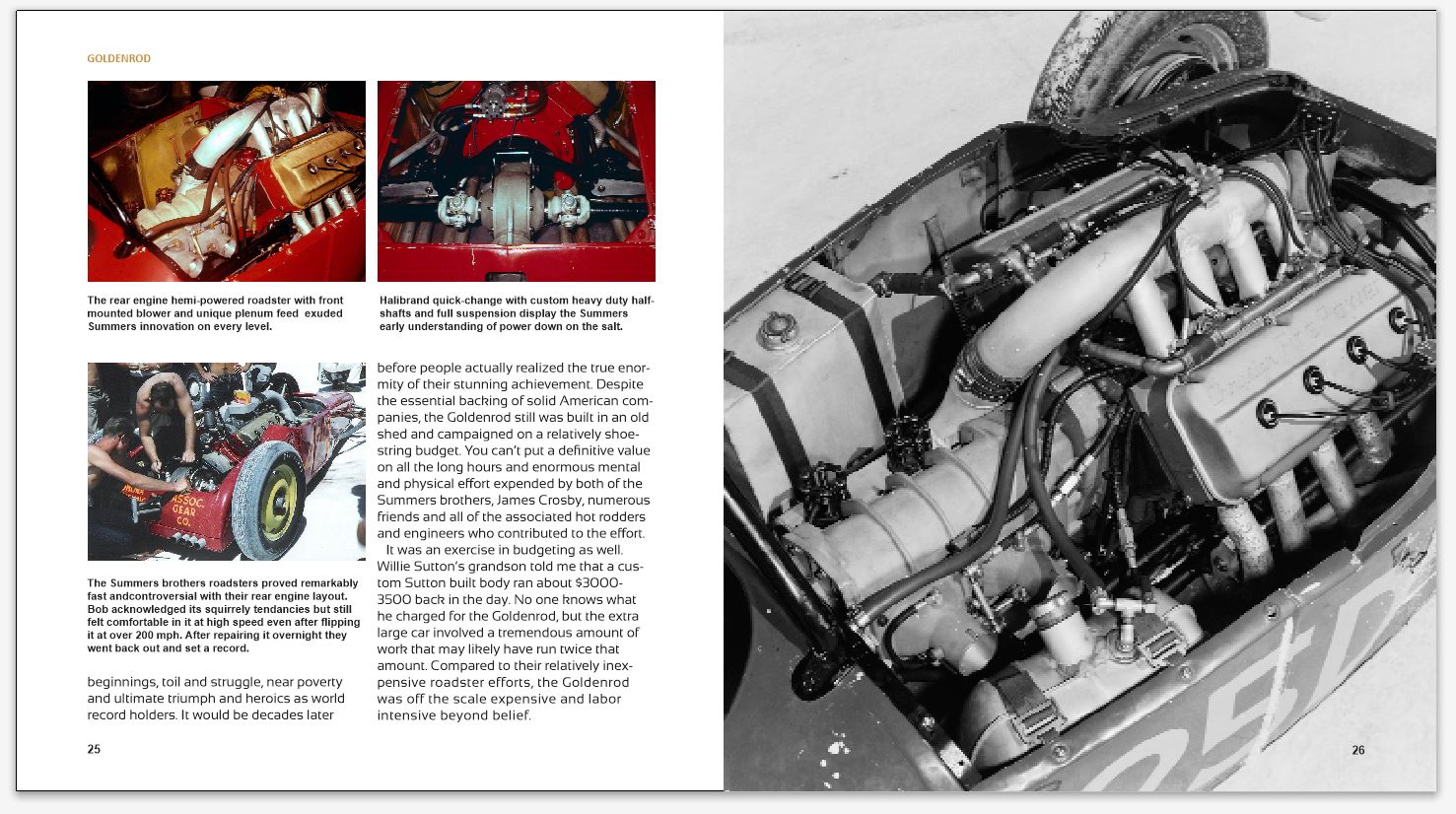 Their roadsters were always powered by supercharged Chrysler Hemi engines. 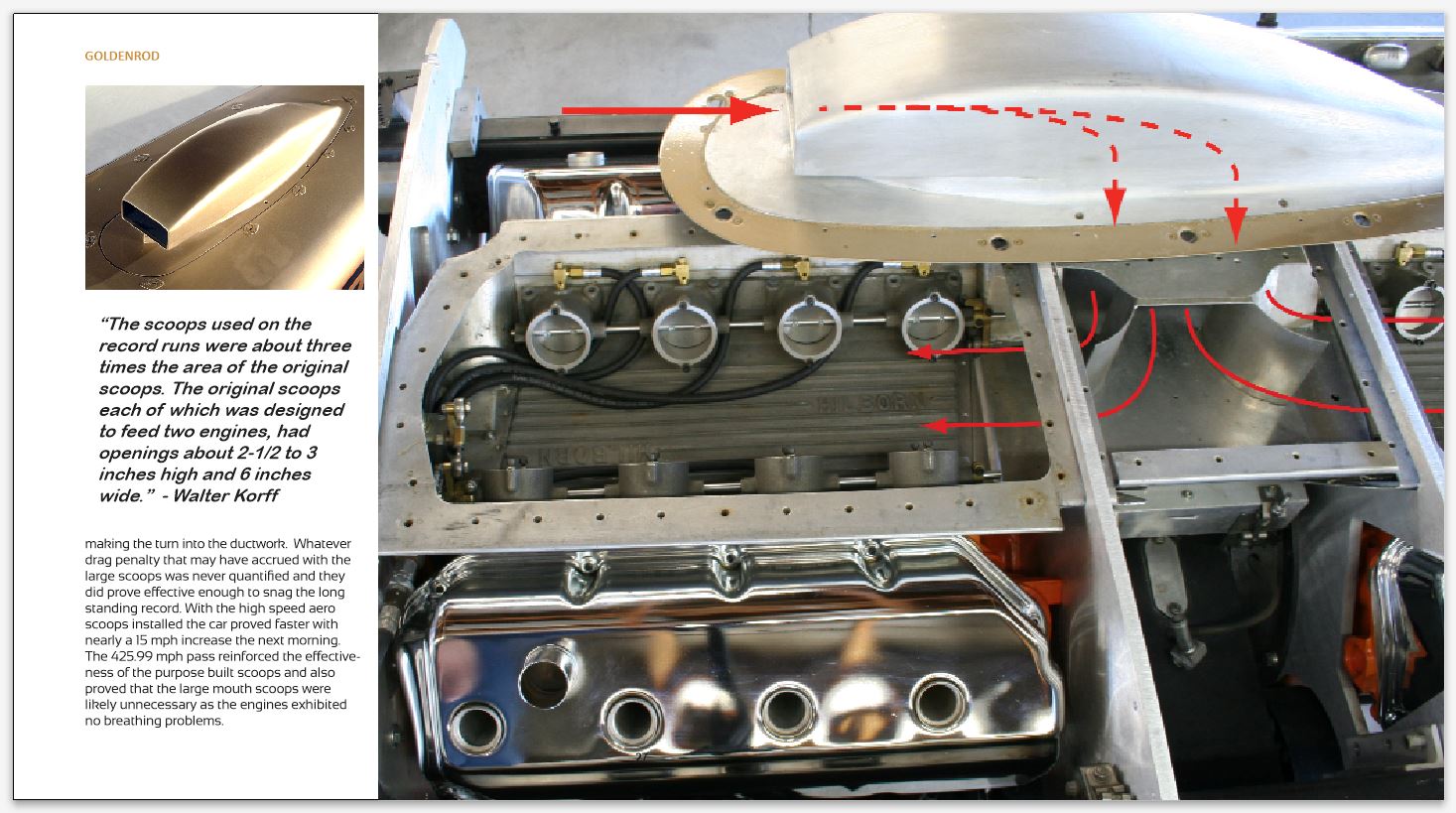 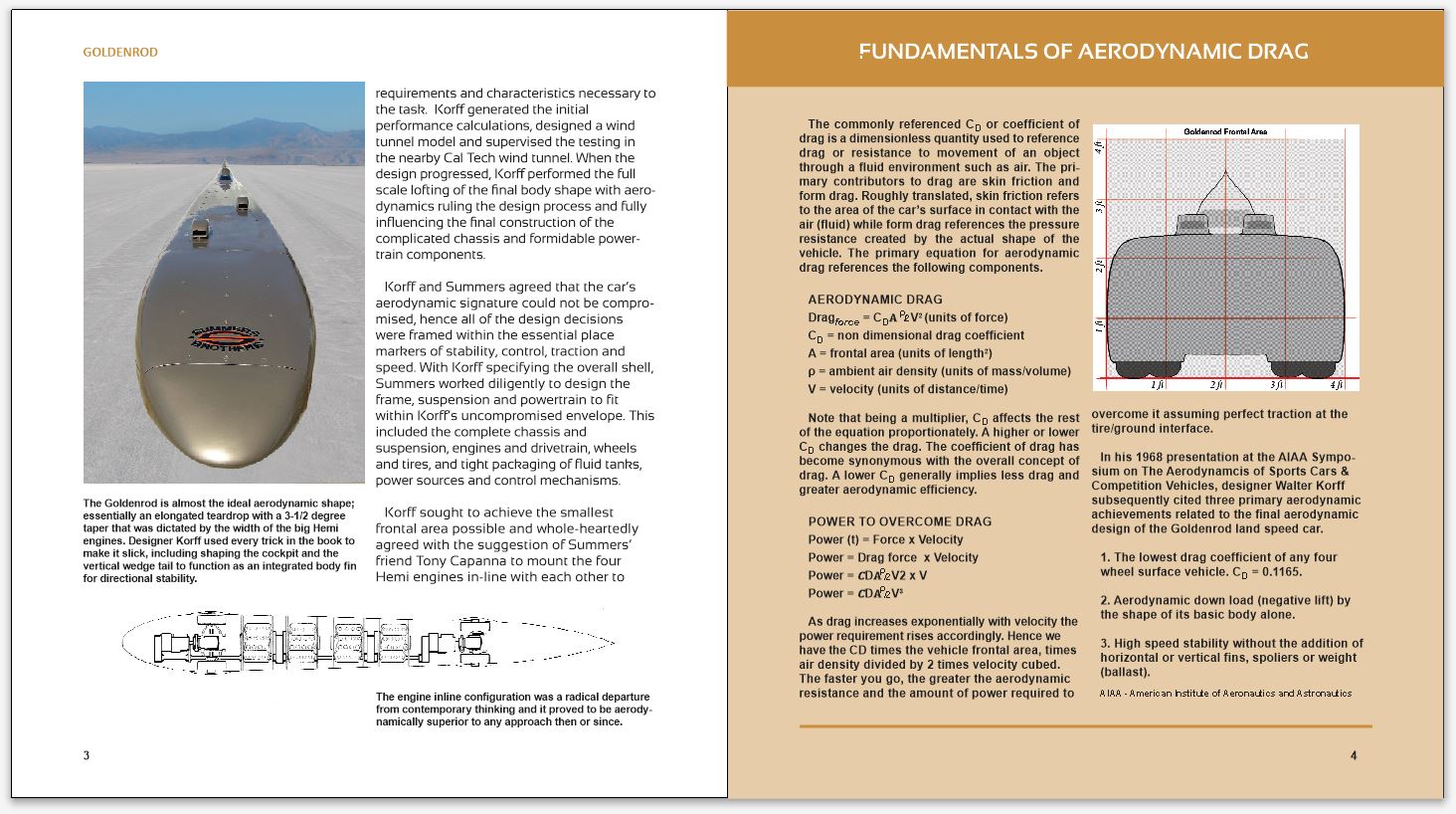 This view shows the inlet path from each of the two scoops. Each scoop fed two engines from  central position which split the airflow equally to each engine.
These pages show the teardrop shaped aerodynamic signature of the Goldenrod and some of the basic calculation used to achieve its 0.1165 coefficient of drag. 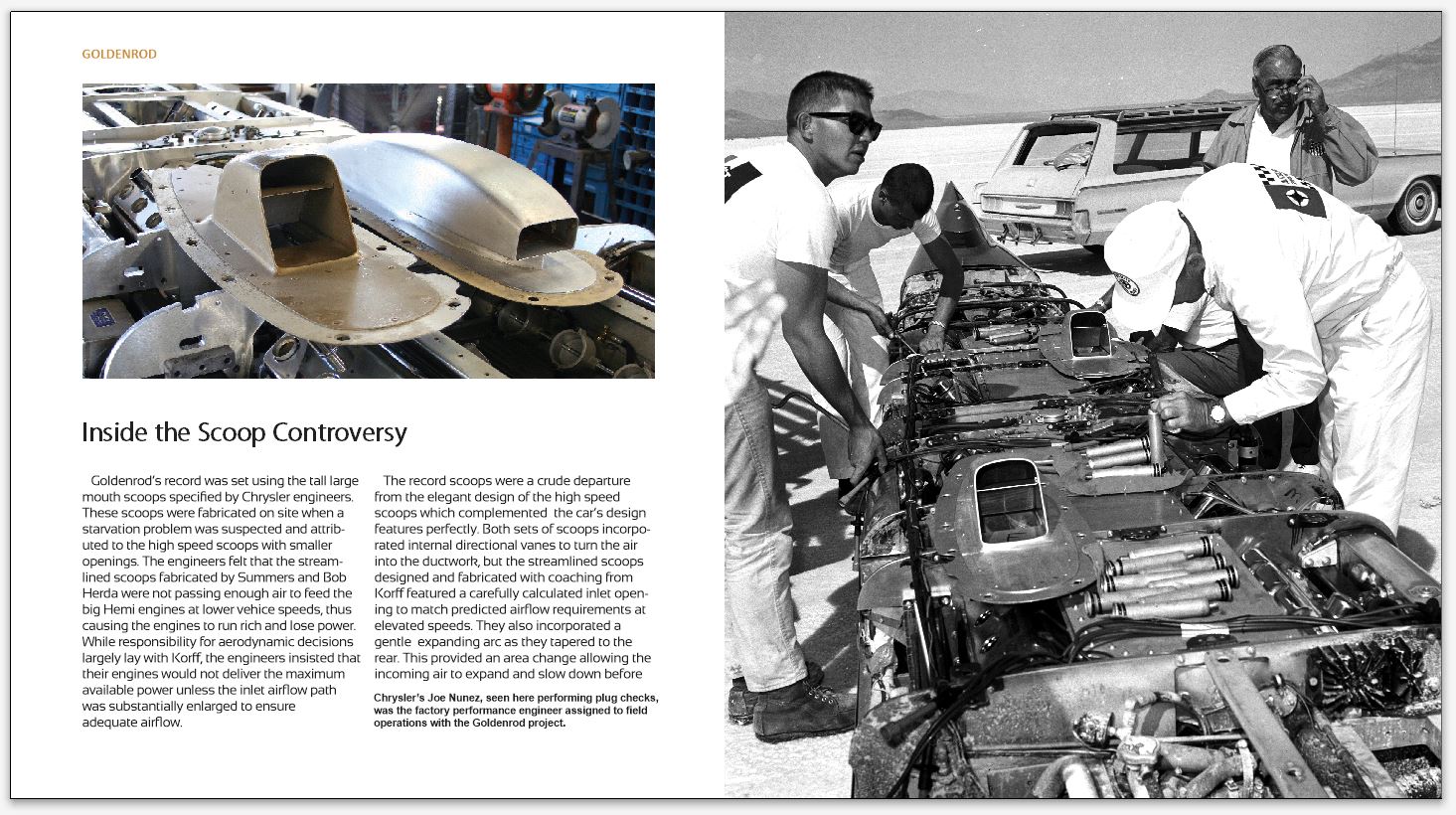 Comparison of the large mouth record scoop and the aero scoop designed by Summers and Bob Herda. The tall scoops were thought necessary to provide more air at slower speeds, but the aero scoops delivered the 425.99 mph pass. 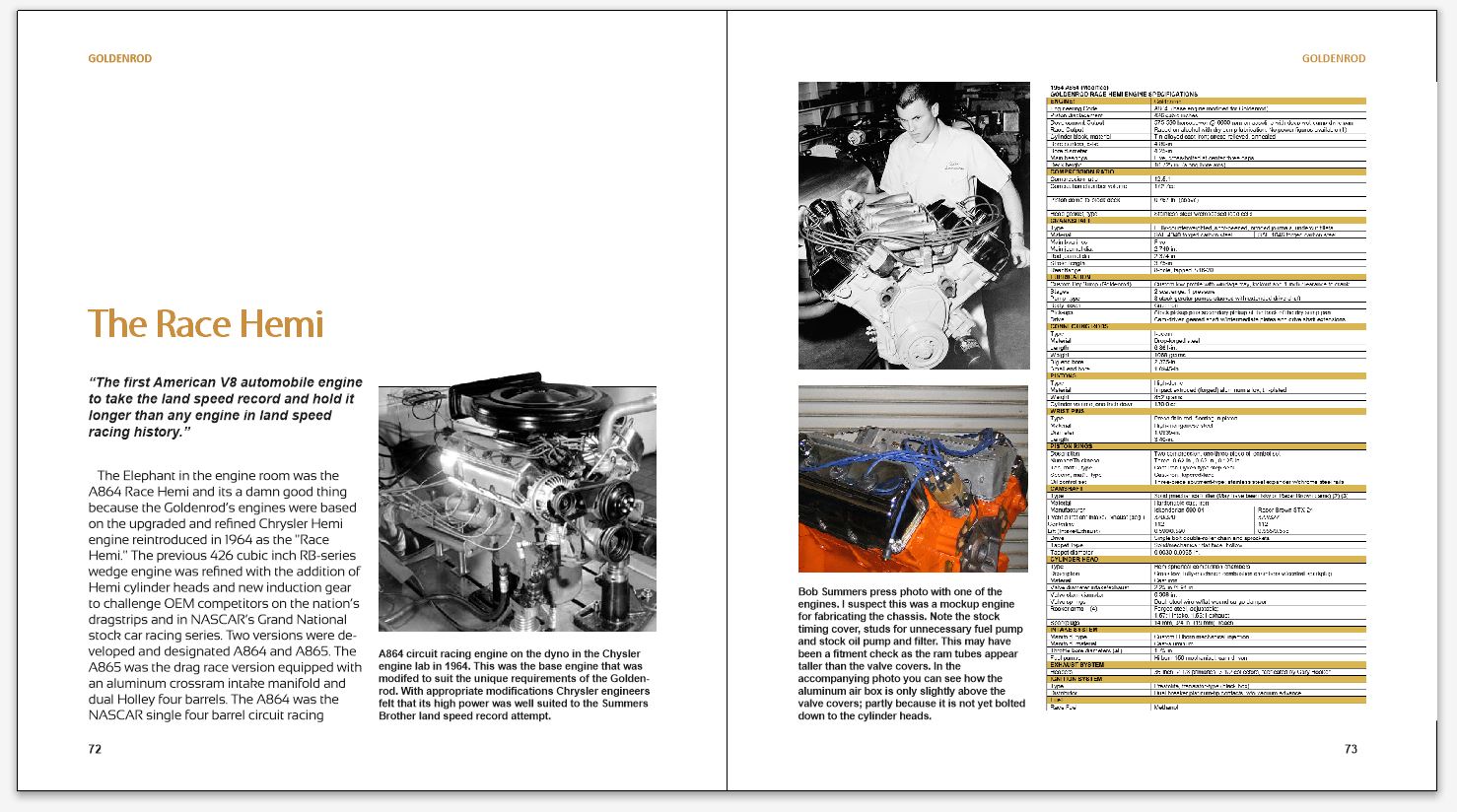 Chapter 5 describes the Chrysler Race Hemi and the various modifications to the engine to make it suitable for the long high speed runs.

These original photos by Alex Tremulus show the team members preparing the car in on of the hangars at the local airfield. The car achieved its record after only seven runs down the salt flats, but it was by no means easy. 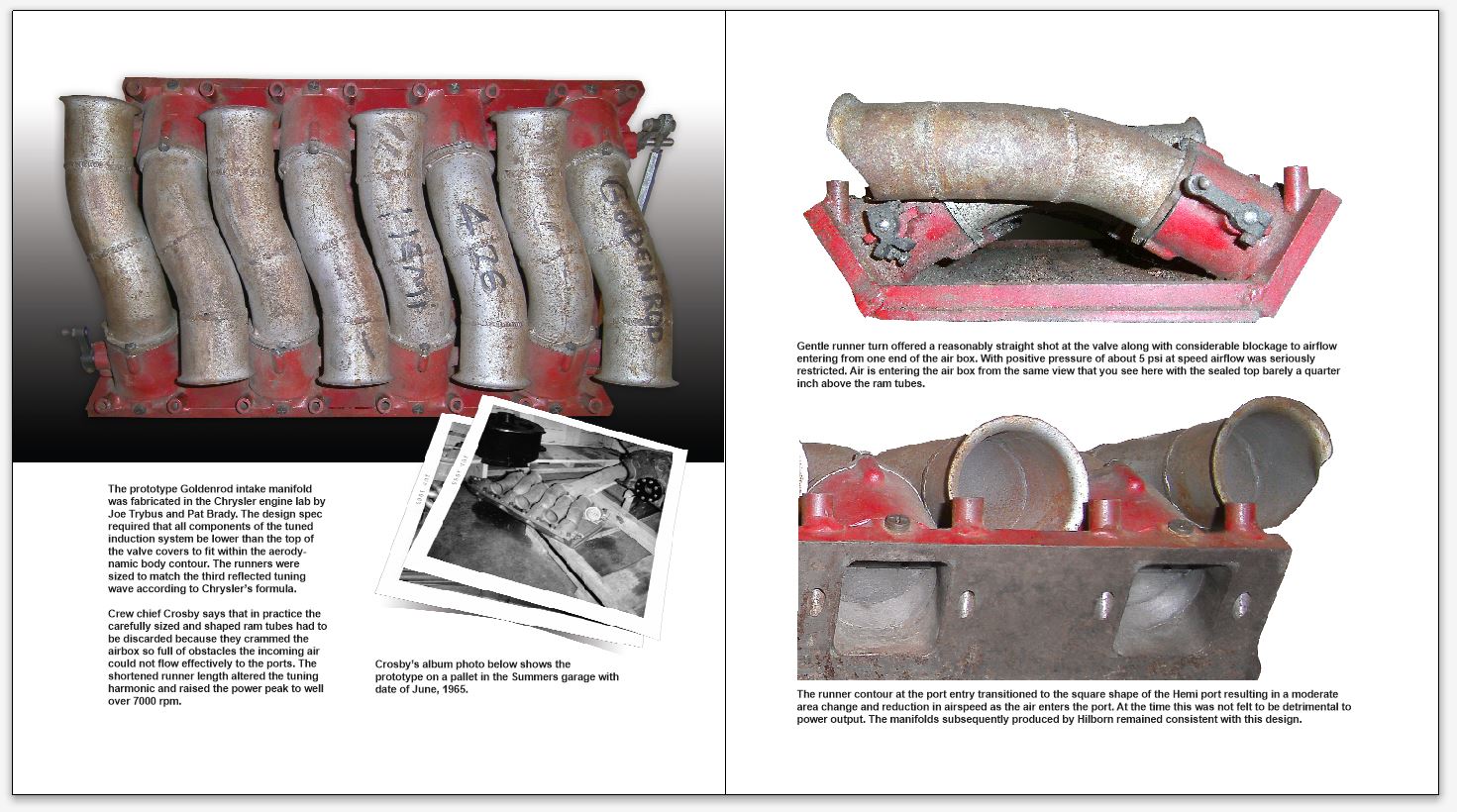 This is the originall factory designed prototype intake manifold design to clear the low hoodline. the inset photo shows it on a pallet in the Summers shop. 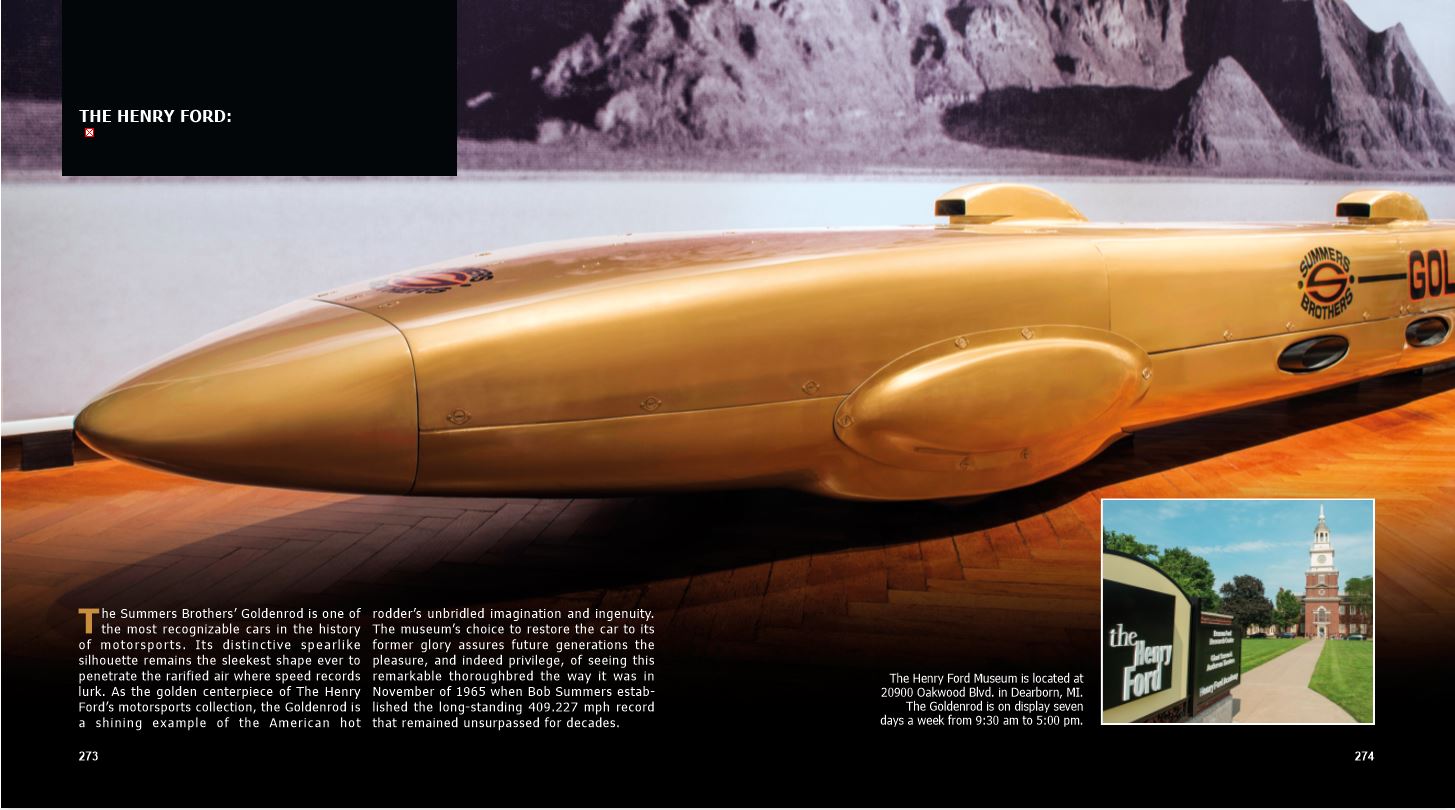 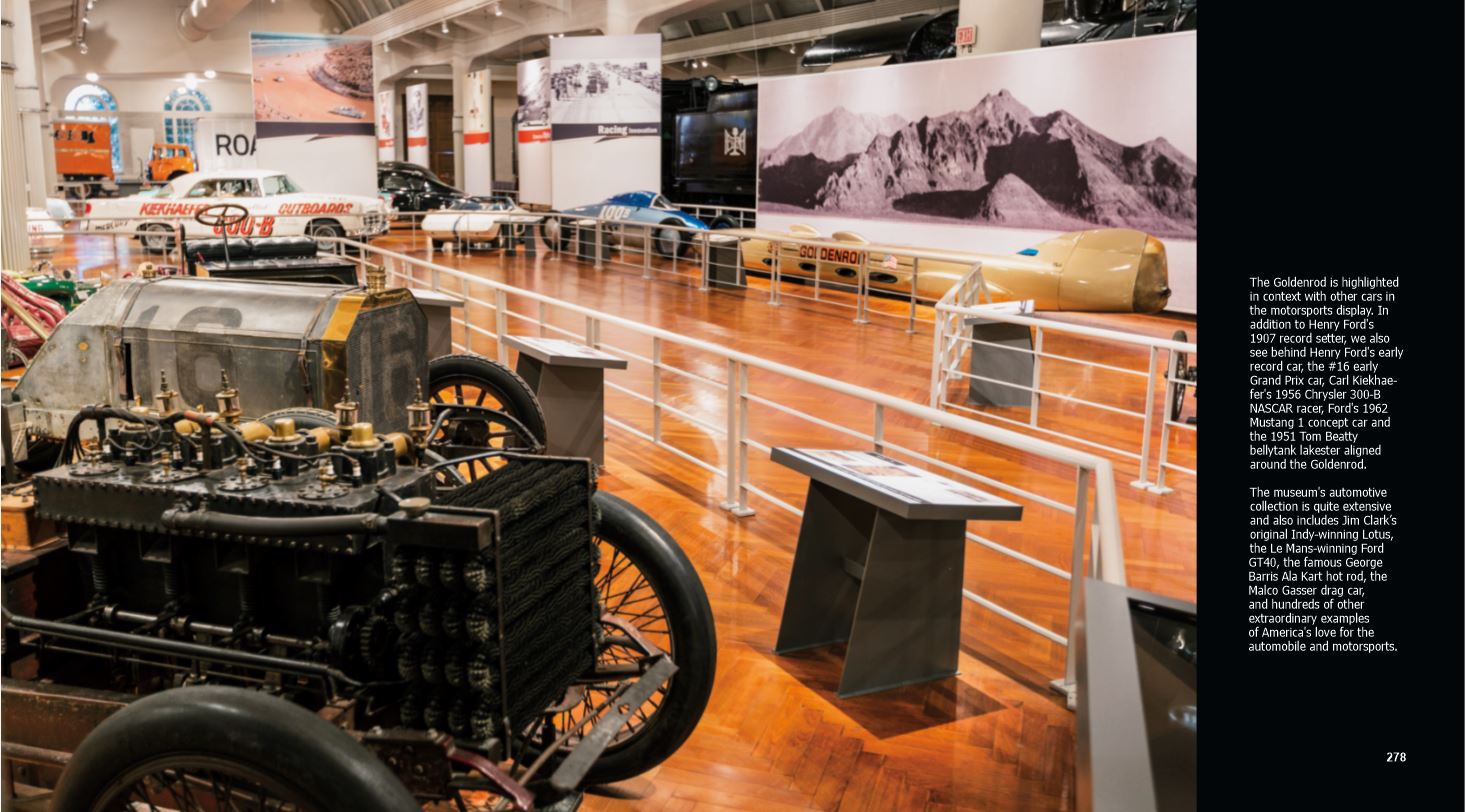 Here is the restored car in the Henry Ford Meseum in Dearborn, Michigan.
The Goldenrod is the centerpiece of the Henry Ford's motorsports collection.
This is a must have book for any land speed racing enthusiast and engine guys who love the Chrysler Hemi. the Hemi engine were basically the same as the current NASCAR engine only with different cams and a custom induction and dry sump oiling system to keep the long low profile. There 300 pages of B&W and full color photos and a complete aerodynamic report by the car's body designer. The book is coffee table collectors quality in every respect. you will be proud to show your friends, but don't loan it out. You may never see it again. Two large 24 x 36 color posters are also available separately, one of which is a numbered collectors quality print. There are only 409 of these posters available to match the 409 mph record. first come first serve.

The book is only available through Landspeed Media Group. Click here to go the the order page and more information on bundled packages.