In keeping with its longstanding tradition of fine workbench series books, Cartech has released another terrific value with it How To Rebuild Oldsmobile Engines 1964-1990. More than just a simple rebuild manual, this edition gets to the meat of the matter for enthusiasts performing stock rebuilds for restoration purposes. It provides the information needed to find and decode factory identification numbers and shows the reader all the different factory modifications and upgrades. A thoroughly detailed How-To book for any and all Oldsmobile builders.

Oldsmobile caught the performance world by surprise when it launched its new overhead valve (OHV) V-8 in 1949 called the Rocket. These engines, along with Cadillac, were the first post-war OHV design produced by General Motors. In a world of flathead V-8 performance, they were a major step forward and an instant hit. As was the norm for all American car manufacturers in the 1950s and 1960s, the Rocket V-8s grew in size and performance capability until the Generation II engines began production in 1964. Offered in a variety of displacements over the 27-year run, the Generation II engine was offered in sizes ranging from 260 to 455 ci, suiting every possible need from reliable fuel economy to all-out performance.

In Oldsmobile V-8 Engines 1964–1990: How to Rebuild, veteran author Mike Forsythe takes you through the complete process of rebuilding and restoring your Generation II Rocket V-8 to its original glory. Covered in a thorough step-by-step format are the tools required, the disassembly process, analysis of what went wrong, parts selection and replacement, the machining process, pre-assembly, final assembly, and the break-in process. Some performance upgrade options are also included.

The Oldsmobile Generation II engine had a lengthy and productive run not only powering Oldsmobiles but also a variety of Buicks and Pontiacs. If you are in the restoration process or simply want a return to factory-original performance in your Cutlass, Delta 88, Vista Cruiser, Toronado, 98, or 442, this book is an essential tool in bring your Oldsmobile back to its original glory. 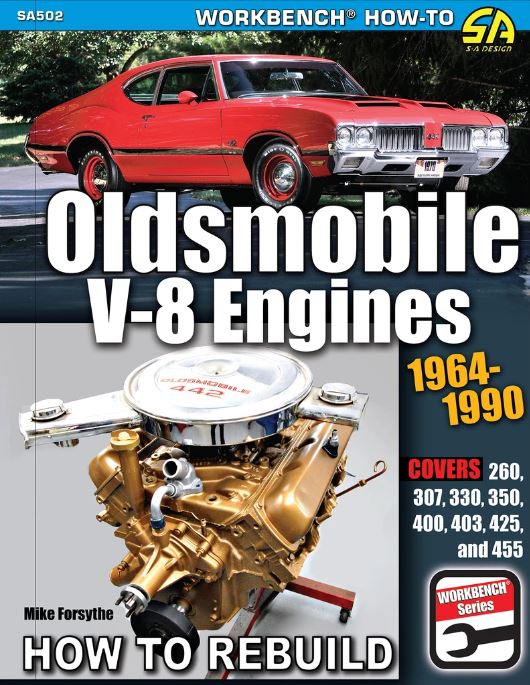