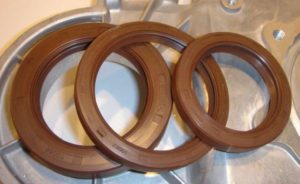 Rear main seal leakage remains a problem on engines that still use 2-piece rear main seals. We all know the time honored method of offsetting the seal parting lines so they do not match the main cap to block interface. And many builders still incorporate a small bit of non-hardening sealer on the parting surfaces, but it is still a craps shoot even for experienced builders. For several years now a new type of rear seal has been making the rounds of racing engine builders with great success. This one piece seal from GST RACING SEALS TM is designed to be cut and twisted around the crankshaft for installation. While this seems extreme, it is in fact a brilliant solution.

The 1-pc seals are designated “F-Type” because they have built-in flexibility which enables the seals to be opened out around the crankshaft. Before assembly the seal is cut radially in one position using a very sharp blade.  This enables the seal body to be opened & twisted around the crankshaft flange before the main bearing cap is installed. The seal has two lips. The flywheel side incorporates a bonded PTFE facing which holds crankcase vacuum without raising friction.

The oil control lip incorporates their highly efficient HD2 Bi-Directional Hydrodynamic helix feature which reduces seal drag & improves sealing reliability. Being bi-directional the seal can also be used in Marine engines with reverse rotation. A further advantage of the seal is that it only has one joint face which is installed towards the top of the engine for maximum effect. When installed the cut surfaces match perfectly and no sealant is required. The cut does not have to be made with any particular precision. It has been test with extreme angles and still works properly.

The seals have been in use for almost 4 race seasons without problems, and many users have advised that the seal solves all of the basic problems with the two piece seals i.e. oil leakage & poor vacuum handling. The BBC seals are being used in race engines at 25.0”Hg vacuum without problems & dyno tests have verified that the engine can produce both extra power & increased torque after fitting the F-Type Seal.

We installed the test seal in the accompanying photos on a 1000+ horsepower big block Chevy and found no leakage after 27 dyno pulls and a half a dozen passes on the car. The held 25" of vacuum consistently and performed flawlessly.

Pricing  is batch quantity-related but typically a larger Engine Builder may pay $35 – $45 each & a smaller purchaser perhaps $65 – $75 each.

Approved stocking U. S. Distributors include: