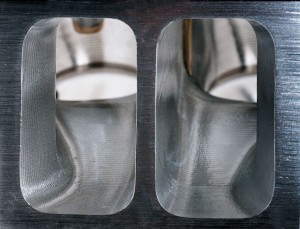 The objective of porting a cylinder head is to improve engine performance via constructive enhancements to the intake and exhaust flow paths. Before you get to this point however, it's important to determine the rpm range of the desired power band and how you want to shape and position the torque curve to best suit your final application. Once you determine what you need and what you’re starting with, you can calculate the desired cross sectional area of the port and establish the existing dimensional specifications of the flow paths. In many cases you won't have the luxury of making these choices easily because you have to work with existing head castings and a commercially available intake manifold. Hence the following points of concern.

Intake flow paths present a variety of airflow obstructions, not the least of which are inconsistent cross sectional area as the flow path navigates past various impediments like the pushrod hump, the manifold to cylinder head interface, valve stem and guide and the valve throat area. A straight pipe of the correct length with a consistent cross section is obviously best, but that’s a pipe dream (sorry) that is never available. Mixture quality craves consistent airflow velocity (runner taper notwithstanding) particularly when targeting higher flow velocities to move more air and increase charge density.  Air moving along a flow path gains or loses velocity as it encounters abrupt changes in direction, various obstructions or variations in cross section, particularly at the most restrictive points. 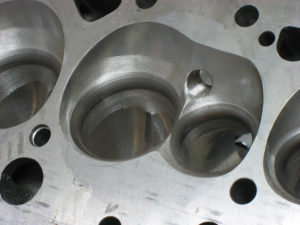 Velocity and area variations invariably introduce turbulence and fuel separation which ultimately affects mixture quality and thus power. In varying degrees this introduces an ongoing series of flow hiccups that disrupt flow consistency and promote fuel separation. Minimizing area and velocity changes almost always improves flow and mixture quality and thus power. That's why opening up a port is frequently a mistake and it’s also why the most effective porting work almost always takes place within an inch or so of the valve and includes careful blending from the valve seat into the throat area of the port (see photo). You can often make more power with effective pocket porting than you can by any other method. Pretty ports don’t necessarily increase power, but properly textured ports that promote smooth laminar flow often improve cylinder filling and mixture quality, both of which enhance power.

Measure the length of the port from the intake mating surface to the valve seat. Do the same for the intake manifold, measuring from the port entry in the plenum to the runner exit. As a rule you want the centerline or average dimension of these two  lengths. This is somewhat difficult to achieve, but you can get very close by using a length of string to measure the length of the port floor and the port roof and then average the two lengths. Add these together to establish the existing fixed port length. You can't change this, but you can tweak the cross section and work on the most restrictive areas to increase and improve the quality of flow. The overriding caveat is to do no harm. As soon as you start grinding you begin increasing the cross section which tends to slow the airspeed and raise the effective engine speed requirement where maximum torque and horsepower are produced. Note: Measure the exhaust ports the same way. Keep in mind that fuel droplets cannot turn as easily as air and air doesn't like to turn. You can't turn air more that 15 degrees without interrupting the boundary layer. There are plenty of things that will cause fuel to drop out of suspension. Air want the straightest possible path to the valve and that is what it seeks. The important turn is the short side radius entering the bowl area. You can gain or lose here if you alter the localized velocity or pressure. 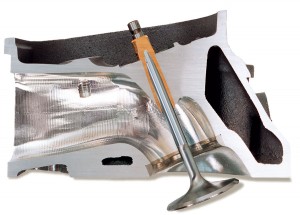 Go with the Flow

Air follows the path of least resistance and fuel droplets follow faithfully unless the path is excessively torturous and they end up slamming into a port wall or dropping out of suspension due to a drastic velocity change. The path of least resistance means that air chooses its favored path through the port based on factors acting upon it i.e. shape, cross section, direction changes etc. In many cases you won’t have a flow bench to help you identify the good and bad areas of a given port. If you do it is often tempting to enlarge an area that appears to flow particularly well; the idea being that more is better. This may work sometimes or it may kill the flow velocity by presenting an area change that dramatically slows the air and upsets mixture quality by depositing fuel on the port walls. In many cases you may find that reducing (filling) the area or leaving the existing area untouched already provides optimum flow velocity for a given port size and rpm requirement. It’s all dependent on the power band requirement. This is difficult to achieve without a flow bench and velocity probes to see where and how fast air is moving in the port.

Mixture motion is critical for efficient combustion. Minimal motion invites fuel separation, particularly at slower engine speeds. You want an active high energy port that will keep fuel droplets in suspension. Hogging out the port is not often helpful. You want to keep the velocity up and support it with adequate port surface texturing similar to the perpendicular lines left by a CNC cutter. These lines create rolling vortices that act like roller bearings to direct and smooth the airflow. Never smooth or polish intake port surfaces. Once the mixture enters the cylinder charge motion is supported by quench action between the rising piston crown and the cylinder head quench pad.  Subsequent turbulence enhanced mixture quality helps to increase torque and sharpen throttle response. This is more useful than swirl and tumble motion which is more effective at street engine speeds.

If you have a copy of Larry Meaux’s PipeMax maxracesoftware.com software you can input your variables and get a complete breakdown of the optimum intake and exhaust passage lengths and cross sections.  If not, you can calculate these values by choosing your desired torque peak rpm  and using the McFarland  formula (see below) to determine optimum cross section dimensions to meet that criteria. Or if you already have a cylinder head commitment, you can measure the port lengths and cross sections of your existing heads to calculate the torque peak they will generate by rearranging the formula.

The formula is applicable to both intake and exhaust port cross sections. It can be written two ways: one to solve for primary pipe c/s area when the torque peak RPM is known or anticipated and the other to predict torque peak engine speed based on a particular inlet path or a primary pipe cross section that is under consideration for either filling or emptying a cylinder of a given volume. To accommodate specific cylinder volumes, the formula considers a single cylinder only, so you’ll have to divide your known or anticipated displacement by the number of cylinders to determine single cylinder volume or displacement. Calculate the projected torque peak RPM with the following formula, inputting the known cross section and cylinder volume.

Or if you have a desired RPM where you want to position the torque peak, manipulate the formula as shown below to calculate the ideal port cross section to support that engine speed.

Using these formulas you can manipulate the projected torque peak and then bias it in the direction you wish by manipulating rod length. Note that a key component of this formula is individual cylinder volume and the number of times you have to process (fill it or evacuate it) per minute. Because the torque peak represents maximum VE, we know that it is the point of greatest cylinder filling, highest charge density, and maximum exhaust volume. By optimizing intake port and exhaust port/header capability to match peak VE we achieve optimum system resonance at the point of maximum efficiency. Max torque follows accordingly. 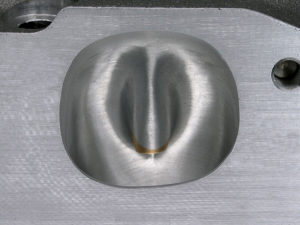 Because the formula also addresses exhaust volume at peak VE, it calculates the optimum primary header pipe diameter independently of primary tube length. The calculated cross section delivers optimum exhaust efficiency because it is ideally sized to evacuate an exhaust volume based on cylinder displacement and processing speed (RPM). Once a peak torque RPM has been established, changing primary pipe length will not change the RPM point, but it will cause torque values to pivot back and forth about that point. Lengthening the primary pipe tends to inflate the torque curve below peak torque, while shortening the primary pipe typically shifts torque value from below the peak and adds it above the peak. Again, it is the change in primary pipe diameter and thus c/s area that moves the torque peak up or down the RPM scale.

This method optimizes for the engine’s torque peak which is the point of maximum volumetric efficiency and thus the point of maximum exhaust volume. Above the torque peak; cylinder filling decays proportionately with RPM (time) because there is progressively less time available to fill the cylinder on each intake event. From an exhaust standpoint there are more power strokes per minute, but proportionately less exhaust volume to evacuate due to declining VE. Optimizing for the torque peak provides the ideal primary pipe diameter, and since peak power is usually no more than 1,500 to 2000 RPM above the torque peak, the selected pipe size has no trouble accommodating an exhaust volume that essentially flatlines, and then begins to fade rapidly.

Depending on the application, header pipe size selection based on manipulating peak torque RPM points outweighs the pursuit of absolute peak power. This suggests erring on the small side of primary pipe selection to preserve velocity with the minimum c/s required to service cylinder volume at peak torque; hence the formula for c/s area based on engine speed, cylinder volume, and VE. Additionally, it should be noted that on the intake side tuned induction systems generate their own independent torque curves that contribute proportionately to an engine’s “net” torque.

Note: The McFarland formula was derived by noted automotive engineer Jim McFarland many years ago. It has proved remarkably accurate. You may recognize McFarland as a former editor of Hot Rod Magazine, former VP and chief engineer of R&D at Edelbrock Corp., SEMA engineering consultant and recognized performance industry authority.