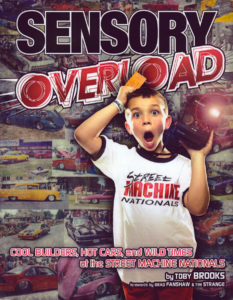 Toby Brooks new book about the history of the Street Machine Nationals reveals the intimate background of a simple car show that blossomed into a full blown cultural phenomenon; spawning the still popular Pro Street movement and multiple generations of dedicated gearhead followers.  With endless research and considerable insight  Brooks investigative skills probe the inner workings of America's favorite car show; a wildly popular event event whose loyal fans followed year after year as it was thrown  out of city after city for the inexcusably rowdy behavior of a few participants and legions of locals who seized the opportunity to run amuck and ruin everyone's  fun.

Effectively "The people's car show," the Street Nats presented an unprecedented venue for the "little guy" to shine and drive his personal automotive statement amongst his peers. Heroes and surprisingly competent car builders emerged. Everyone was welcome and everyone was treated well. Basic bolt-on machines shared the stage with glittering Pro Street supercars, some built by enterprising teenagers who would go on to become some of the nation's top car builders. 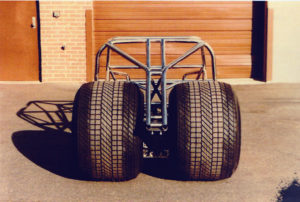 Brooks dissects the management and political turmoil that ultimately saw Petersen Publishing and Car Craft Magazine turn over management and control to the Special Events show management company while retaining exclusive rights to show coverage in the magazines. Competently managed by publisher Harry Hibler, the CC staff and outsourced assistants, the show's liability issues ultimately became too much for Petersen's narrowly focused attorney who urged it's dismissal. 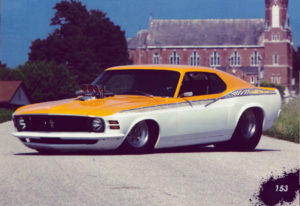 After the exchange, Special Events grew the show to phenomenal proportions and stabilized its location at the Illinois State Fairgrounds in DuQuoin where it seemingly flourished except for the inevitable rowdiness of local punks and the sinister specter of a self centered Petersen executive VP who conspired to sabotage the show and steal it back under his own control.  Much to his credit, Brooks reveals how Special Events was blindsided by John Dianna who withdrew the magazine's negotiated support and formed all new shows and cruises that never came close to matching the power and prestige of the Street Machine Nationals. Considerable stink accompanied the political subterfuge surrounding these actions as the company that founded the Street Nat's sought to undermine them for profit and personal glory. 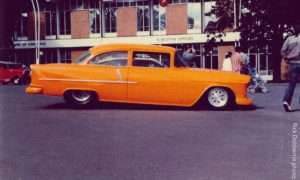 Cooler heads prevailed and the charlatan VP was ultimately dismissed, but not before considerable damage had been wrought. Special Events shifted gears, changing their name to Family Events and throwing themselves into promoting and re-branding the event. No company was better equipped to handle this task and the event quickly regained its legendary stature. Economic instability and damage inflicted by local thugs and nonbelievers who continued to tar the event's good name at every venue ultimately led to it's demise. Loyal fans were devastated.

Brooks chronicles these times and the subsequent 2013 resurrection with writing skills that make this writer feel hopelessly inadequate. He devotes most of the book to the legendary car builders who surfaced and flourished under the Street Nats umbrella. That would include humble superstars like Scott Sullivan, Rick Dobbertin, Matt and Debbie Hay, Rocky Robertson, Rich Gebhardt, Mark Grimes, Troy Trepanier, Al Hinds, Bret Voelkel and the thousands of car builders who spent their winter months tireless laboring over their machines with a singular goal in mind: to show up and show off at the Street Machine Nationals. Personal interviews and back stories of prominent builders fill the book along with a center section packed with photos revealing the flavor and spirit of the event. Even with 268 pages there isn't much room for everyone who contributed to or gained stardom local or otherwise. Still the author manages to credit all the right people and recognized the legion of attendees who's cars form the core of the mother of all car shows.

Anyone who grew up with the Street Nats will appreciate this book. It should be required reading for all car enthusiasts. While it focuses on the event and its superstars, it also elevates the relevance of ordinary Joe's whose economic circumstances limit the extent of modifications to their personal street machine. Thus a shiny Mustang or Challenger with little more than a zoomy set of wheels and a Holley four barrel can park right next to the baddest car on the fairgrounds and they all interact like the greatest of friends; a fraternity of car crafters hell bent on sharing and enjoying their cars. The title "Sensory Overload" is clearly appropriate. anyone attending a Street Nats event is immediately overwhelmed by a sea of outrageous street machines as far as the eye can see. Street car heaven if you will and everyone's a player.

Great book. Get it, own it, treasure it. It's one of a kind, just like your personal street machine. See you at the Nats.