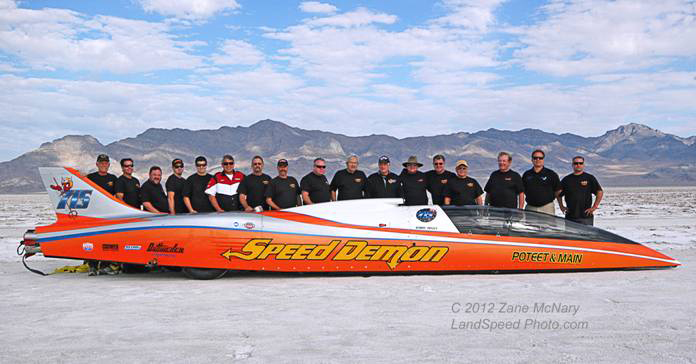 The Poteet and Main streamliner with George Poteet at the wheel and the world's most powerful small block Chevy driving the wheels set new FIA International speed records in Category A, Group 1, Class 10. Poteet established new records for the kilo and the mile. For the flying kilo the car recorded a 707.408 KPH with a corresponding MPH of 439.562. For the mile record it ran 439.024 MPH with a corresponding 706.540 KPH. Poteet eclipsed previous records held by the Summers Brothers Goldenrod and Charles Nearburg's Spirit of Rett, making Speed Demon the fastest wheel-driven piston powered car in history. The records were set at Mike Cook's Bonneville Shootout, a yearly event specifically arranged for fast cars to attempt FIA certified land speed records, www.landspeedevents.com. 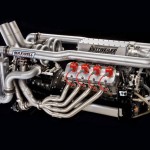 At last year's event the car established the fastest ever one-way run of 457 MPH  with an exit speed of 462 MPH, but mechanical difficulties prevented them from backing it up for the record. Their efforts prevailed at this years event thanks to the efforts of the owners, driver and crew and the extraordinary 2200+ HP, 368 cubic inch "Hellfire" small block Chevy built by engine master Ken Duttweiler. The Speed Demon has now claimed the Hot Rod Magazine Top Speed Trophy four years in a row. Congratulations guys!