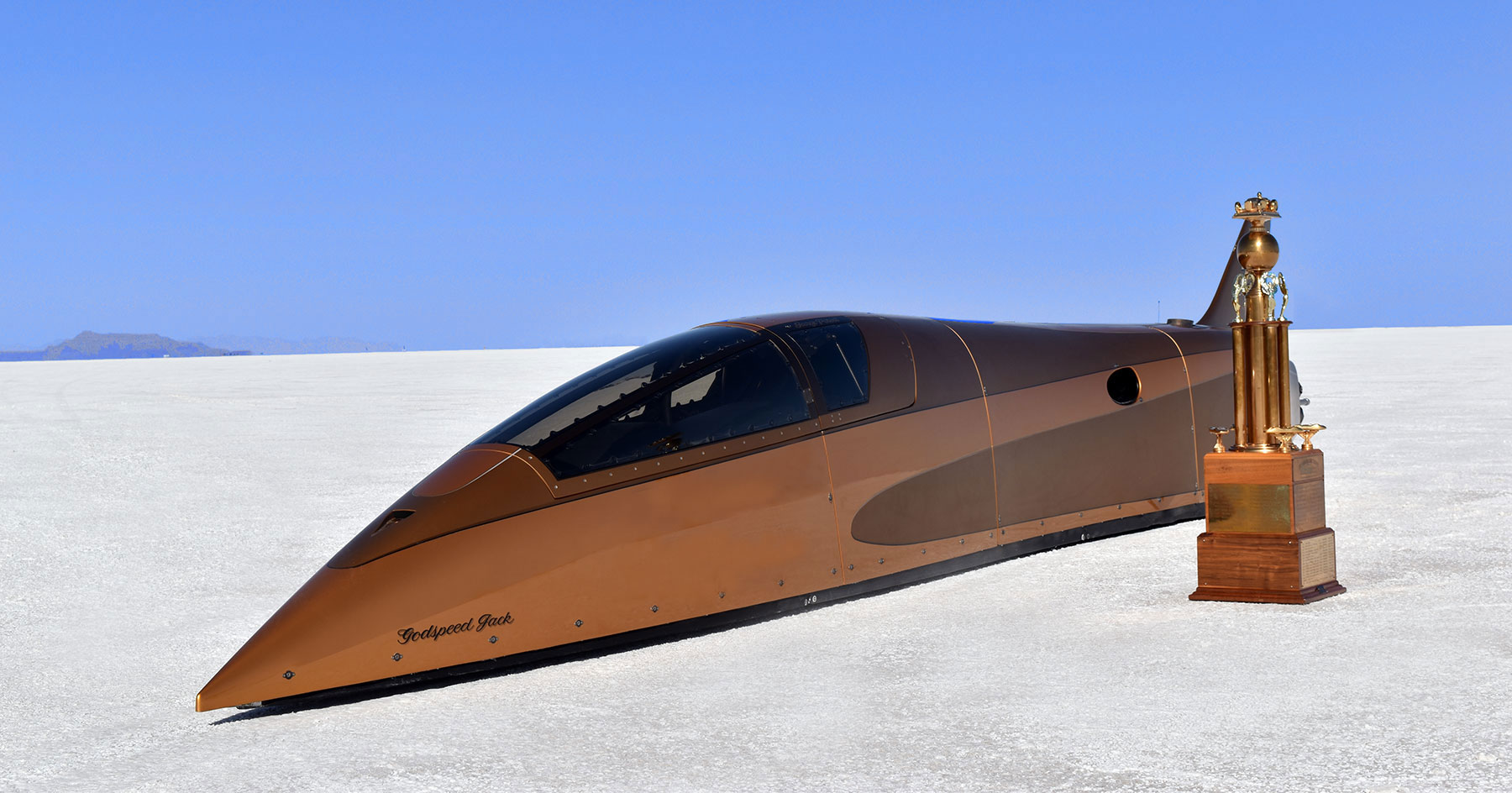 The Speed Demon Racing Team headed by George Poteet, Steve Watt, Kenny Duttweiler, and most ably crewed by the notorious Men in Black continued its march of dominance at the 2021 SCTA Bonneville Speed Week by collecting its tenth Hot Rod Magazine Top Speed Trophy with a stunning 466.290 mph blast topped by a 475 exit speed at the end of the timed mile. Despite the same gremlins that plague many land speed racing teams, the Speed Demon team displayed a level of resilience and determination that once again elevated them to a degree of excellence worthy of the coveted Hot Rod Trophy. That never quit, find a way, drive is what makes them a world class team. In the end, no new records were secured, but the Hot Rod Trophy was still theirs and their expanded database will help them prepare for 2022. 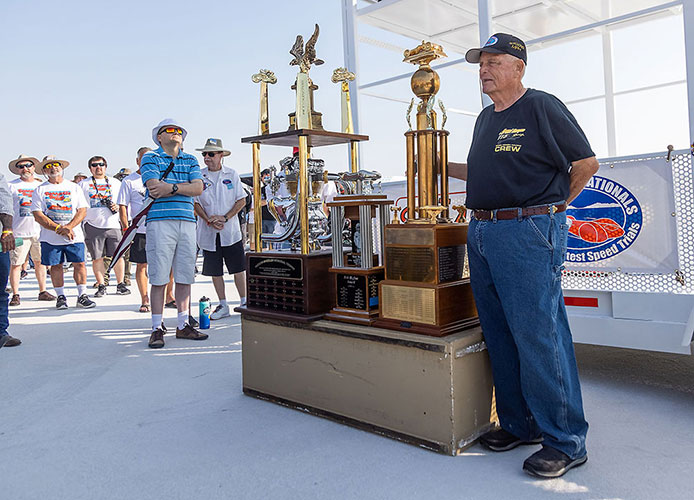 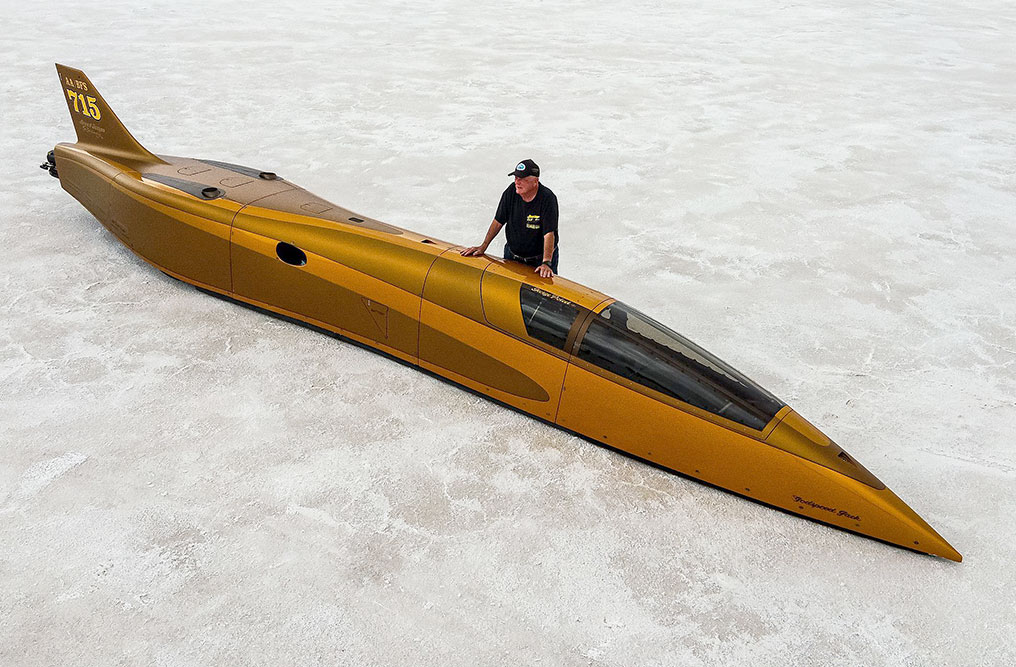 The team brought their usual arsenal of engines which allows them to switch classes whenever necessary. These included the 2020, 555ci AA-Class big block Chevy that had previously (2020) stunned nonbelievers with a staggering 481 mph top speed of the meet, the LS based 443ci engine and the diminutive, but very powerful  E-Class, 256ci small block Chevy. The plan was to raise the AA record even higher and switch to the A engine if necessary to raise that record. The E engine was held in reserve to help new co-driver Chris Raschke get his unlimited license and acclimate himself to the car. A simple, straightforward plan to be sure, but no team is immune to the ever present salt gremlins lurking about to spoil its day. 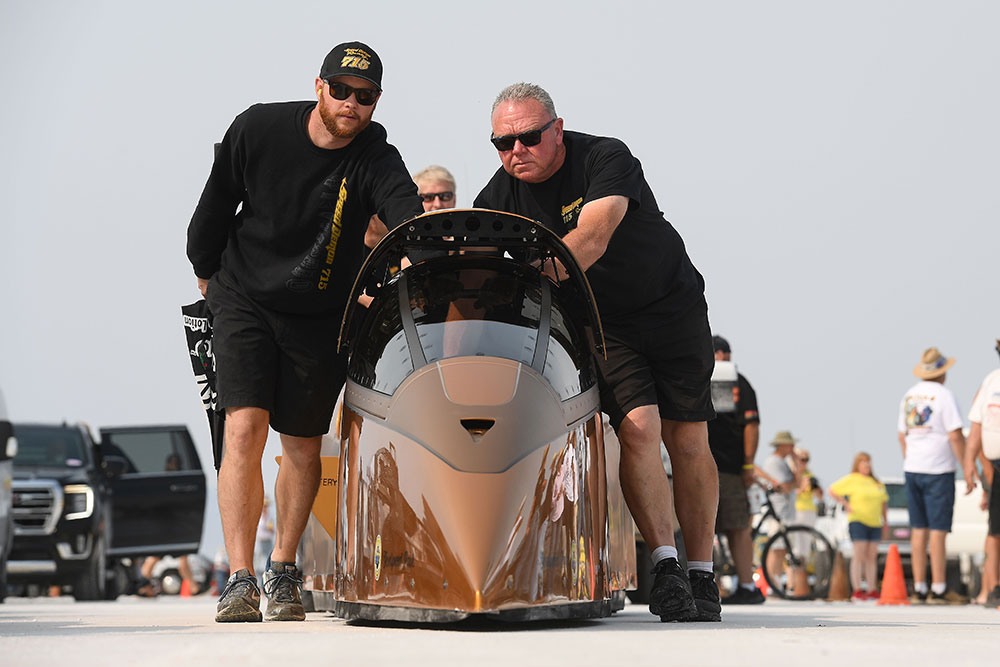 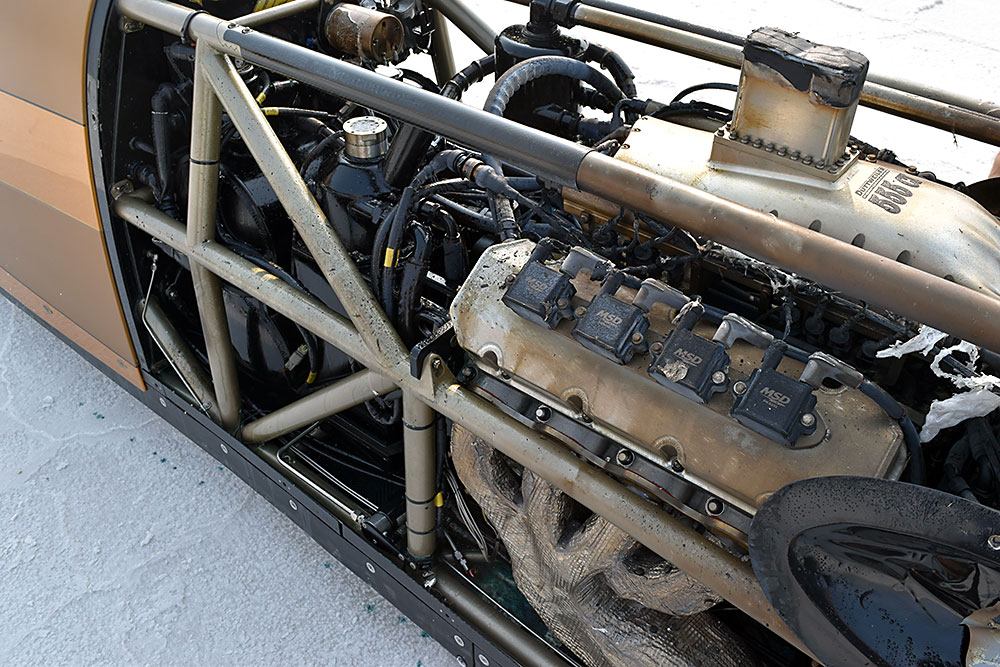 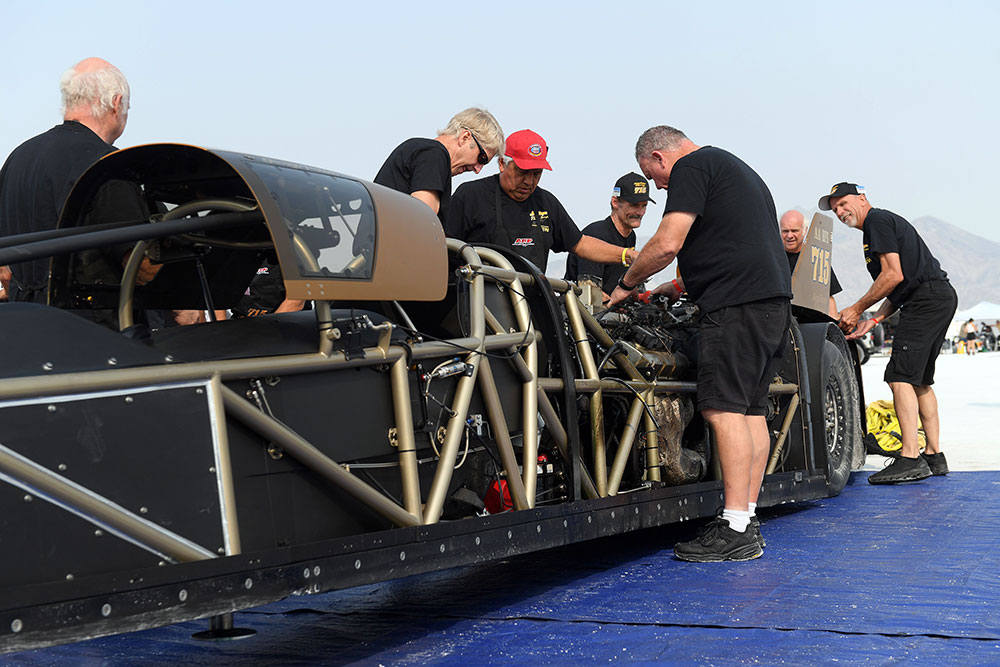 An oil fire caused by a failed valve cover gasket caused some damage on the first pass and it was subsequently determined that the big block had also blown a head gasket. A disappointing beginning since that big block was faster than ever at the three mile and appeared to be on its way to another 480 mph or better run. The crew sprang into action, repairing damaged components and burnt wiring, but the decision was made not to waste time so the big block was pulled and they installed the 443 cubic inch LS based A-Class engine. It proved its mettle on the first pass with a 466.290 mph run to secure the Hot Rod trophy. Unfortunately, the second pass to raise the record was marred by an automatic parachute deployment when a sensor detected a low oil pressure condition. The decision was made to pull that engine and inspect for damage which couldn't be properly accomplished at the race. 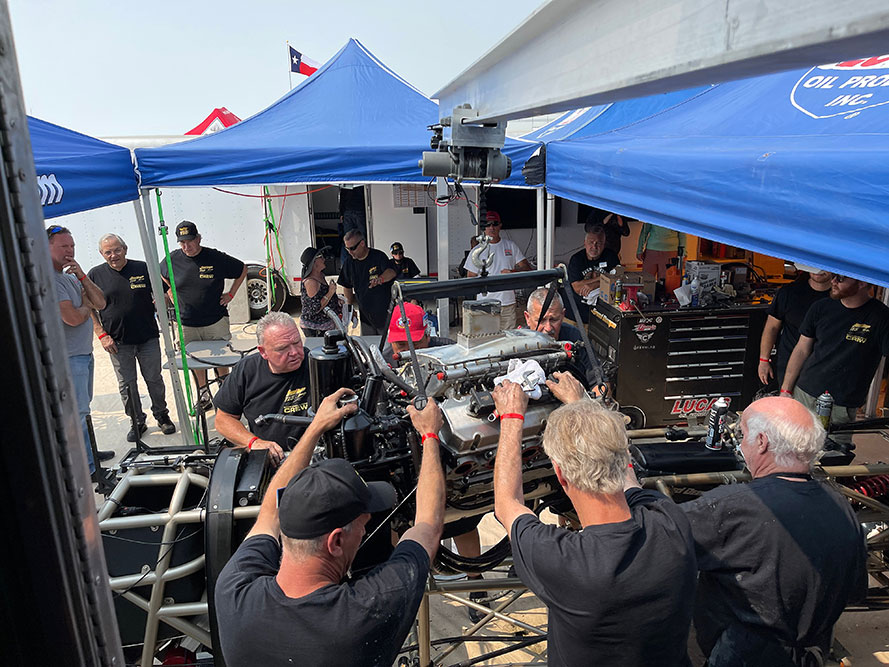 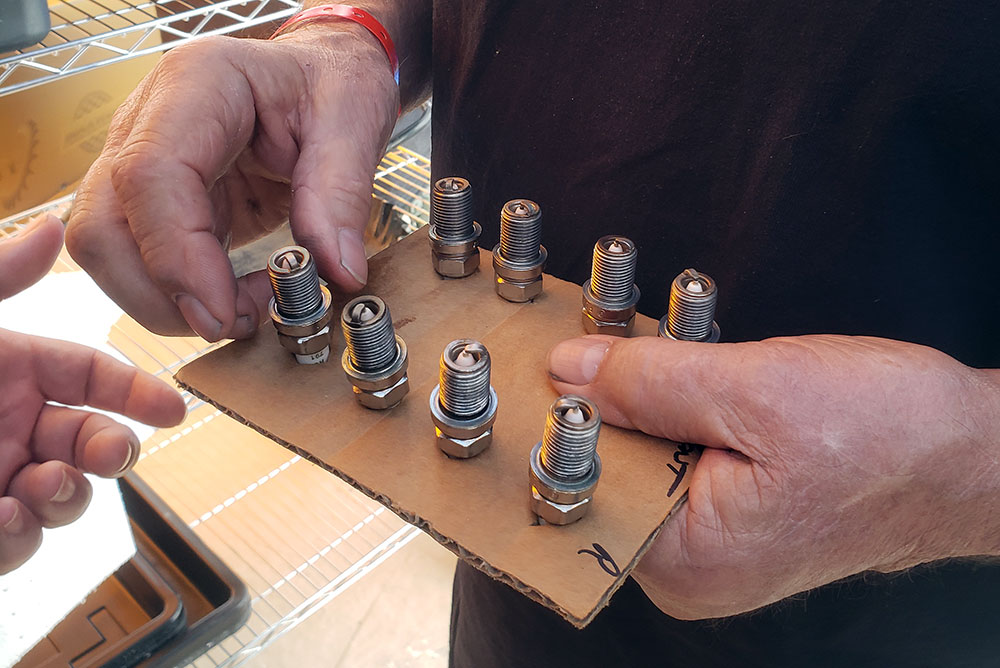 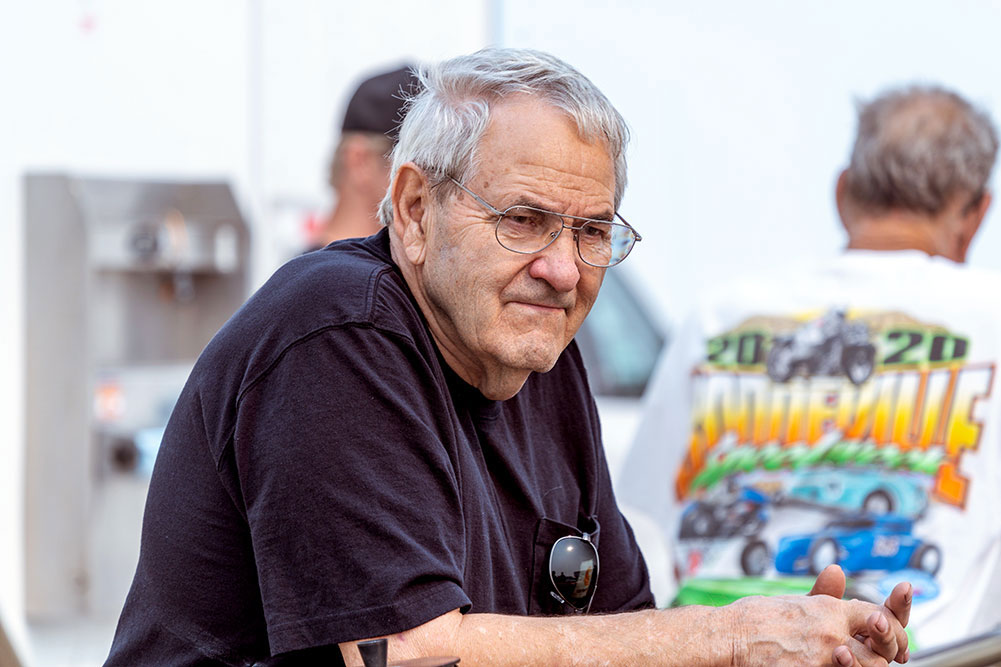 Engine builder Kenny Duttweiler contemplates his next move after examining a pretty damn good looking set of plugs from the A engine after the aborted second run.The plugs looked great, but if there really was an oil pressure issue he didn't want to risk a very expensive engine without a chance to examine the bearings. Hence the decision was made to pull the second engine and install the E_Class small block Chevy. 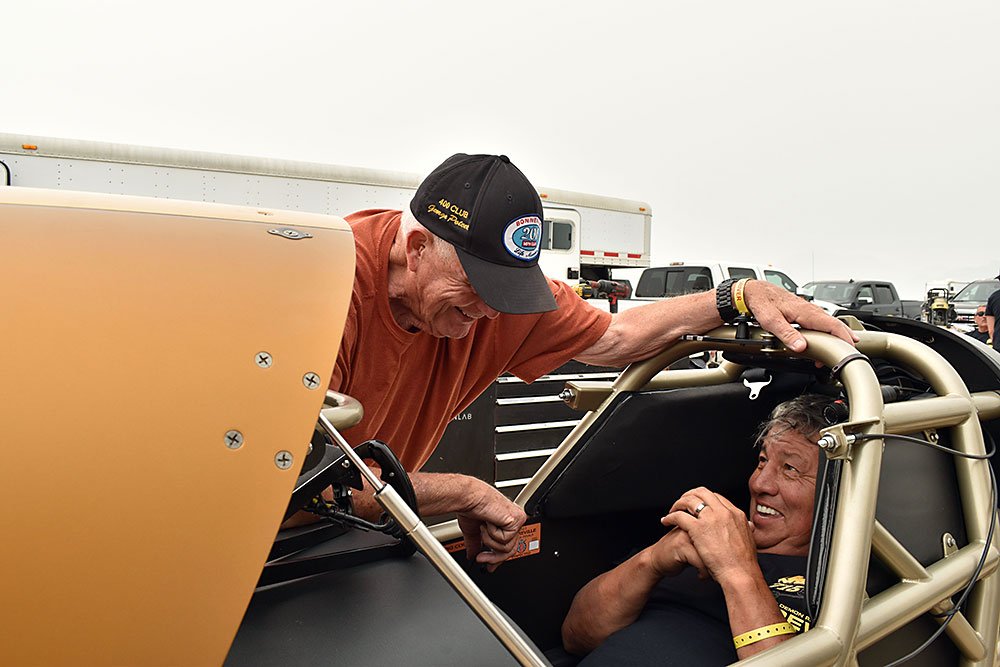 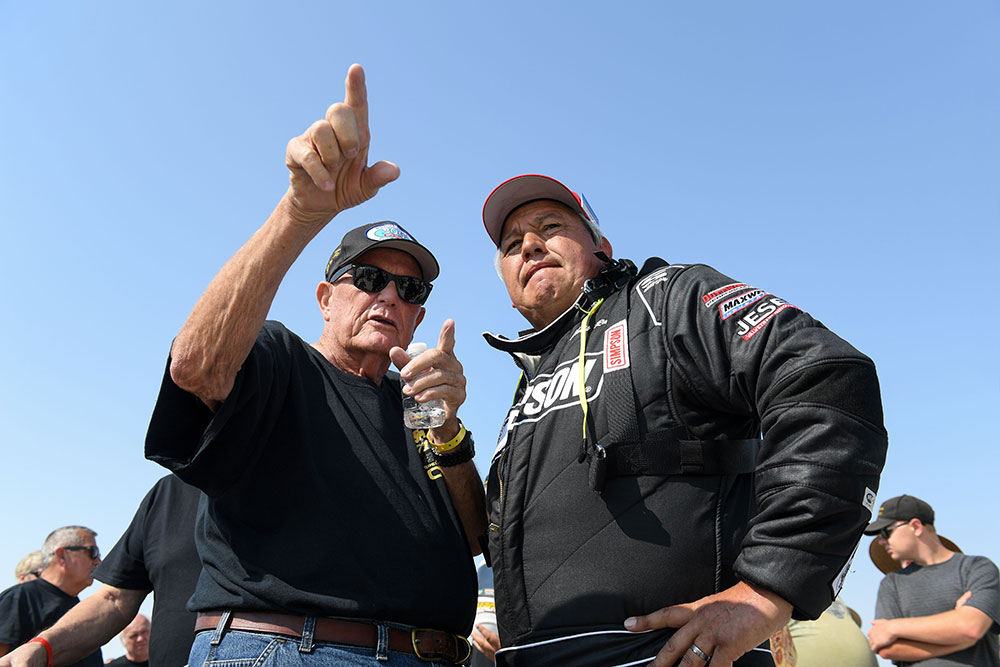 With the E-Class engine installed, George turned over the driving chores to ARP's Chris Raschke whom he had been grooming as a secondary driver for the car. Raschke had made the first pass in the car on opening day with the big block in place, but he had to limit his speed in order to gain his unlimited license. With that secured, he was cleared to run as fast as he wanted and he popped off a 390 mph pass right out of the box, well above the existing 348 mph E Record. Subsequent examination in the impound area found that the small engine had also suffered some damage and could not be run again for the record. So the team returned home with three damaged but repairable engines and the Hot Rod Trophy because nobody even ran within sight of the 466 mph speed the A engine delivered. Further inspection determine that the A engine suffered no damage although it might have if the low oil pressure sensor hadn't deployed the parachute just before the four mile mark. 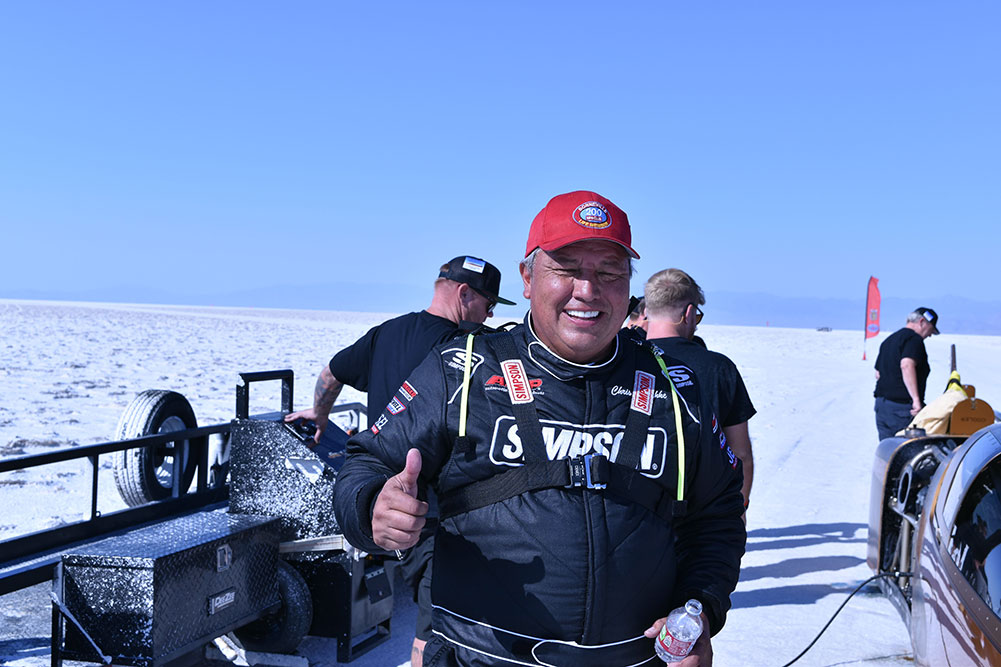 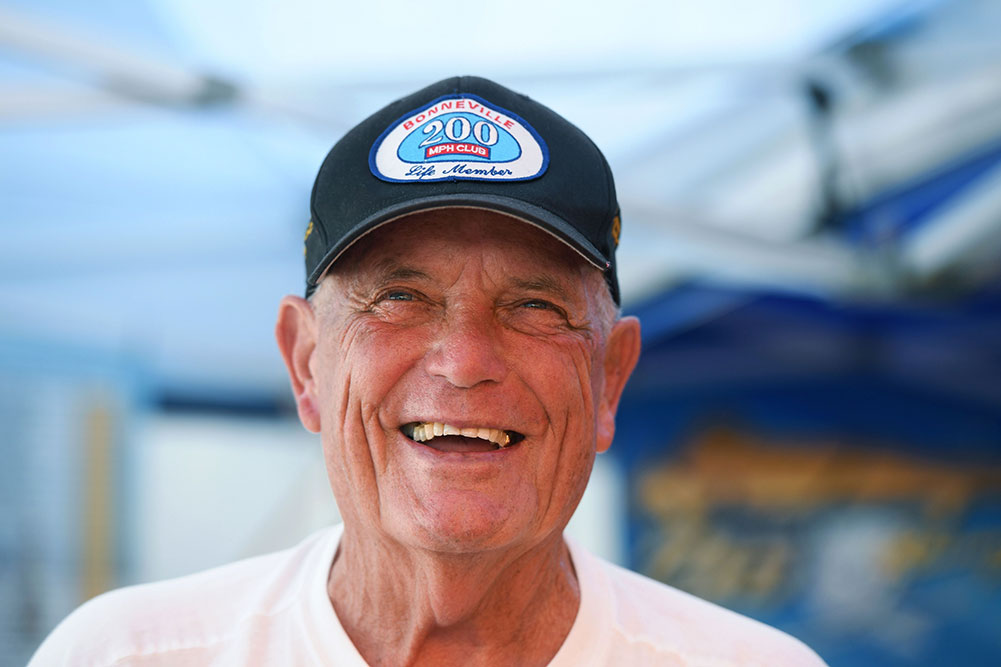 Despite not being able to back up his record qualifying run, Chris Raschke was pleased with the speed he ran and the fact that the E-record remained an attainable goal in the future. And while leaving without any new records, George was pleased with Chris's performance and very happy to have once again accomplished his goal of dominating the Hot rod Trophy with overwhelming speed.

The Speed Demon is one sleek bullet when seen from this vantage point. The aerodynamics have been honed to the razors edge and Duttweiler is pushing the engines harder in their typical 59 second fuel throttle runs at high boost. With the aerodynamic mods made to the new car and stepped up power, the car has emerged  from the 450 mph zone to speeds as much as 30 mph faster. More records are certain to fall and the Speed Demon Racing Team will undoubtedly continue to seal its reputation as the fastest land speed effort in history.
Chevy fans should take note that the Speed Demon is powered by three generations of Chevy V8s. The GEN 1 small blocks hold three records and the LS and big block engines both hold one. Thus ensuring that Chevy V8's remain the fasted piston engines on the planet. And each of them still have more potential given a good track and spot on tuning. Look for the Speed Demon to continue its unrelenting reign of terror on the record books and the Hot Rod Trophy at Bonneville Speed Week 2022.