Many years ago racers decided that cross-drilling an additional hole straight through the mains provided better lubrication to the bearings, likely a result of trying to fix an oiling problem or some other problem caused by improper clearances and bearings that were not originally designed for the stress of a racing environment. In some cases the through holes were drilled in both the mains and the rod journals. 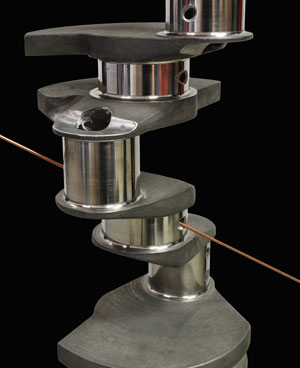 This did no real harm to engines that never ran elevated engine speeds. But racers soon learned that at very high engine speeds, a cross-drilled crank centrifuges the oil out of the main journal, preventing it from flowing freely to the rod journals. All top-of-the-line racing crankshafts utilize “straightshot oiling” in which the rods are oiled directly via a straight, uninterrupted passage from the mains as illustrated here by the welding rod being passed through the oiling passage. all racing applications should incorporate crankshafts configured with straight shot oiling.

This sample using a Scat big block Chevy crank illustrates the prinicple. When the throw is at 12:00 oil enters the main bearing between 6:00 and 9:00 depending on the journal size and stroke. The oil passage goes straight to the rod throw and exits at approximately 1:30 to 2:00. With this method, engine speed has no ill effect on oil delivery to the throw.

Cross drilled cranks use oil feed holes that are drilled completely through the main journals and sometimes the rod journals. An angled hole is then drilled from the rod throw to the main on the centerline of the crank. This method is flawed because pressurized oil must enter the main journal and overcome the centrifugal force of rapid acceleration or RPM to reach the center of the crank before the oil can travel to the throw. Increased oil pressure is often used to overcome the centrifugal force, but in most cases it cannot do so and rod failure occurs. Cross drilling is not recommended for any racing applications.