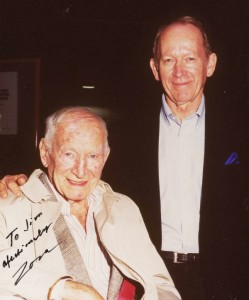 In the spring of 1966 Hot Rod Magazine staff member Jim Mcfarland was assigned a trip to the GM Engineering Center in Warren, Michigan; one of many he would make over the coming years. He was meeting with the intermediary between the Chevrolet Engineering staff and the media community Walt Mackenzie. That meeting evolved to a luncheon with  the already legendary Zora Duntov. Can you imagine? A  young engineer/journalist on assignment from Hot Rod sitting across the table from Duntov?  After lunch Mackenzie left Mcfarland with Duntov to let them “get acquainted.”  In Mcfarland’s own words, the following transpired over the course of their  friendship.

As told by Jim Mcfarland

“I ask him if he recalled when the small-block Chevy had been introduced in ’55, and if he remembered that you could buy GM performance parts for the engine right over the counter at dealerships.  I still recall the wry smile as he paused to pull a file of documents from his desk, offering one for me to read.  I was stunned.  It was a letter he written to Chevrolet management dated December 16, 1953. It was titled, “Thoughts Pertaining to Youth, Hot Rodders and Chevrolet.”  It literally and in fact, outlined how Chevrolet needed to provide performance parts to hot rodders who previously identified with Fords and would be likely prospects to popularize the new small-block, if the right parts were available. 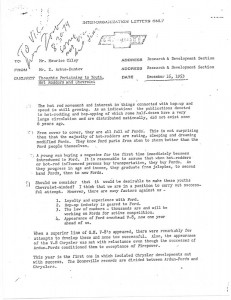 When I’d finished reading the letter, no surprise here, I asked if I could obtain a copy for my own, recognizing the clear and historical impact it had made in the entire high performance parts industry.  As he tucked it back into the folder and then into his desk, his response was, “No, that’s corporate business.”  Then he just smiled.

In the ensuing years that our friendship developed, and we did things both socially and professionally, the letter was never again mentioned.  But on a late Friday in 1974, while at Edelbrock, I received one of Zora’s frequent calls.  Only this time he said, “Today is my last day at Chevrolet and I’m calling a few friends.”  Typical Duntov.  Very shortly thereafter, he was inducted into the SEMA Hall of Fame and came to the banquet to receive that honor.

So as I’m sitting down at the Edelbrock banquet table, with Vic and Nancy Edelbrock already seated, up walks Zora…again probably three “bladdy marys” into the evening because the cocktail of the festivities had just ended.  As he reached into his coat pocket, he said, “Give me your pen.”  He then laid a copy of that original letter on the table and began to write on it.  In the process, he looked up to courteously acknowledge Vic and Nancy at the table.  When he’d finished writing, he handed me my pen and the letter.  At the upper left-hand corner, he’d written, “To Vic from Zora” and dated it 8/30/74.  To which I responded, “If you're going to give this to Vic, please do.”  In his classic style of politeness, and obviously a bit embarrassed, he took my pen again and wrote right below his first note, “Sorry, not Vic but Jim,” and gave me the letter.

I framed the three pages of that document and they have hung in every office I’ve had since that time.  And I have it on pretty good authority that the original is locked in a safe that belongs to someone who long ago recognized the long-term effects it had, not only inside Chevrolet but to the specialty parts industry that derived considerable and significant benefit from what it caused to happen.

This letter has been widely reproduced in various places and even edited and made to look more formal that it was in some cases, but this is the genuine article as personally handed to Macfarland by Duntov. The letter offered to Jim was a copy of the original personally autographed by Zora. The original letter to Ed Cole was thankfully preserved and is presently displayed at the National Corvette Museum in Bowling Green, Kentucky.

Note Zora's handwritten comment at the upper left first page, "To Vic from Zora, 8-30-74, Sorry not Vic, but Jim"