The Marvelous Mechanical Designs of Harry A. Miller 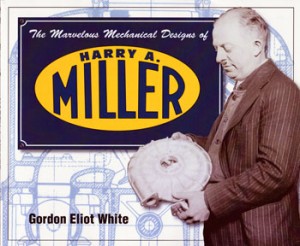 Hardcore engine enthusiasts love looking at high-performance engines. Many of them are particularly intrigued by earlier pre-war designs that populated the board tracks of America during a significant part of the early twentieth century. This interest extends to Indianapolis engines, marine engines and even aircraft engines that were sometimes pressed into service for land speed record cars.  Among the early pioneers of these engineering treasures, Harry A. Miller represents the gold standard of engine and race car design.  A modern resurgence of interest in early engines, particularly among present-day racers and engine lovers, has brought many of the early designers like Miller to the forefront once again. Helping to serve this hungry market of engine aficionados, author Gordon Eliot White has penned numerous titles based on early engine designers and car builders whose ingenuity and craftsmanship remains highly regarded. 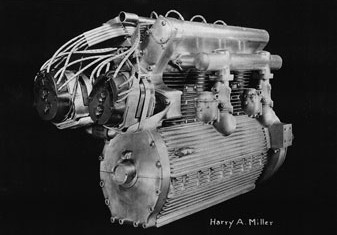 The Marvelous Mechanical Designs of Harry A. Miller is a pictorial examination of Harry Miller’s significant body of work. White is a fitting extension of previous Miller disciples Mark Dees and Griffith Borgeson whose efforts to chronicle early racing history have been widely lauded. Having preserved the Miller record in considerable detail, Mark Dee’s family heirs passed his collection of Miller photos on to White and along with the late Bob Sutherland, they made him the archivist of the surviving Miller drawings, most of which were drawn by Miller’s longtime engineering accomplice and draftsman Leo W. Goossen and then built by the third member of the team Fred Offenhauser.  A veritable gold mine of pre-war racing and engineering design genius, the archives represent a historical treasure of immeasurable value.  To help preserve the record of these important racing artifacts and present Miller’s work to engine enthusiasts everywhere White has assembled this 126-page collection illustrating some of Miller’s best-known work. 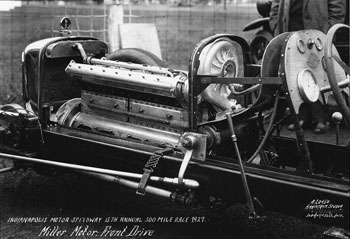 While Miller is most recognized for his engine designs, not as many people realize that he was also a skilled race car designer and White’s presentation helps to set the record straight. The book is laid out in an appropriate pictorial format with photo captions and accompanying text where necessary. Wonderful period photos bring the Miller legacy to life displaying the art as well as the engineering of Miller’s masterful designs.  While modern engines are virtually lost beneath a slathering of design nonsense called engine covers or in some cases cladding meant to hide all the mechanical details and make things pretty.  But it’s generally concocted rubbish concealing the heart of highly refined and competent modern engine design.  There’s none of that nonsense in Miller's work.  Carburetors, polished cam towers, sweeping exhaust manifolds, beautifully cast blocks and cylinder heads, period ignition systems and all the rest are right there for everyone to see. They represent the art of engine design where high performance and exquisite design merge to reflect the true beauty of mechanical mechanisms that deliver race-winning performance and look damned good doing it. There’s just something innately right about it and engine guys know it when they see it. 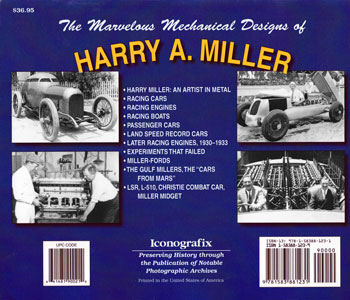 White’s book also showcases many of Miller’s innovative race car designs such as the 1915 “Golden Submarine” built for racer Barney Oldfield or the Miller front drive 91’s one of which now resides in the Smithsonian Institution.  Each turn of the page reveals another pair of remarkable photographs detailing a rich legacy of racing engines, Indy cars, V16 marine engines and more. Here and there among the photos, White includes period drawings and plan views that give the reader a better understanding of some of Miller’s advanced designs. The 145 photos and drawings are large and well reproduced, inviting readers to peruse them at length studying the details and marveling at the sophisticated concepts Miller employed during the so-called “golden age” of American racing.  Author White lets the photos speak for themselves, injecting appropriate details in captions and text where appropriate. This is a great book for engine enthusiasts who love to study the photographic details of early racing engines. Readers will find themselves revisiting it from time to time like an old friend sharing new secrets that they somehow missed on previous visits. The story is inspirational and the photos are compelling; a frequently rare quality in automotive books.  See for yourself.

Gordon White is a dedicated author, researcher, and historian of racing, aeronautical and marine subjects. He is fully immersed in automotive and motorsports culture, holding a US/FIA 2000cc speed record and serving as a senior judge for the Antique Automobile Club of America. He is an auto racing advisor to the Smithsonian Institution, archivist for the Harry A. Miller Club, an affiliate to the American Society of Appraisers and a USCG certified Master mariner for both sail and powered vessels. Gordon has authored four other automotive titles including Lost Race Tracks, Kurtis-Kraft, Ab & Marvin Jenkins: The Studebaker Connection and the Mormon Meteors, and Indianapolis Racing Cars of Frank Kurtis 1941-1963.  You may also wish to look for his out-of-print books, OFFENHAUSER, a biography of Fred Offenhauser and a history of his career and engines, and KURTIS-KRAFT, a biography of Frank Kurtis and his cars, both hard-cover and regrettably now out of print, but still to be found on Amazon and at used bookshops.

The Miller book can be ordered directly from the author. It is $36.95 plus $5.95 shipping and handling and well worth it I might add. Those who order all five books together can have them shipped together for the same low $5.95 shipping cost.