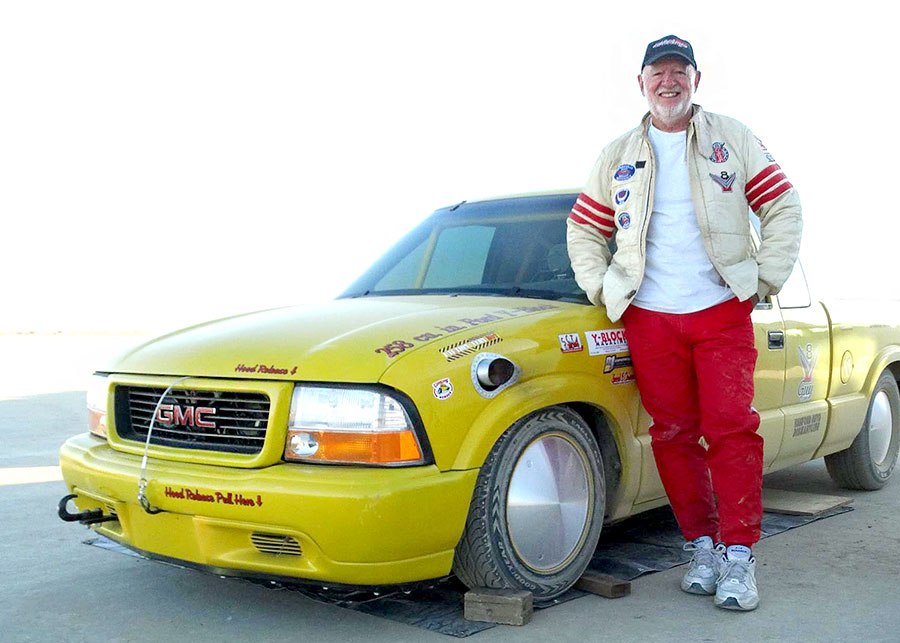 A turbocharged Ford Y-block in a GMC pickup truck seems a rather illogical choice for racing at first glance, but that's the nature of class racing at Bonneville and the El Mirage dry lakes. No other venues offer the broad choice of classes and the relatively loose option to innovate your way into the record books. That appealed to Charlie Burns on many levels.

A retired high school math teacher, Charlie now enjoys spending quality time with his wife Corene and long hours in the garage constructing his personal interpretation of speed in the form of very fast pickup trucks powered by long discarded Ford Y-block engines. Well that's crazy you say, but no, Charlie's got a plan and this is not his first go round. His current turbocharged GMC Sonoma pickup has already run 148.057 mph at the dry lakes and he is looking to push it much harder at Bonneville later this year. Now some might smirk at his choice of powerplants, but further scrutiny reveals that old discarded mid-fifties Y-blocks that nobody seems to want are in fact remarkably popular engines in amateur performance and racing circles around the world. 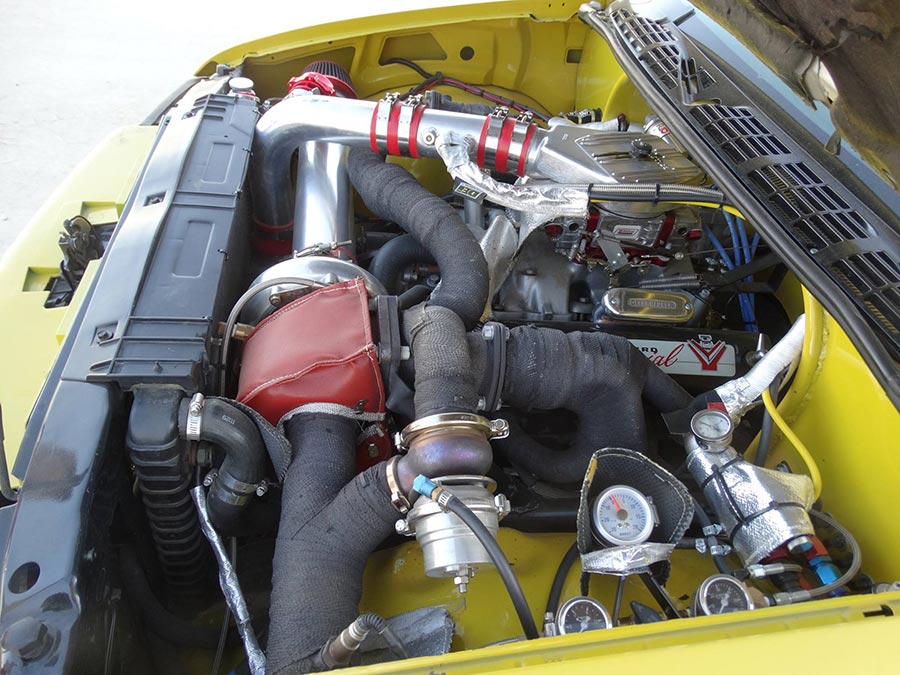 Charlie designed and hand-built this custom turbo system for maximum performance and easy accessibility for maintenance. Countless hours were devoted to fitting it under the stock hood and making sure that all the components were properly sized and configured for maximum output and reliability. 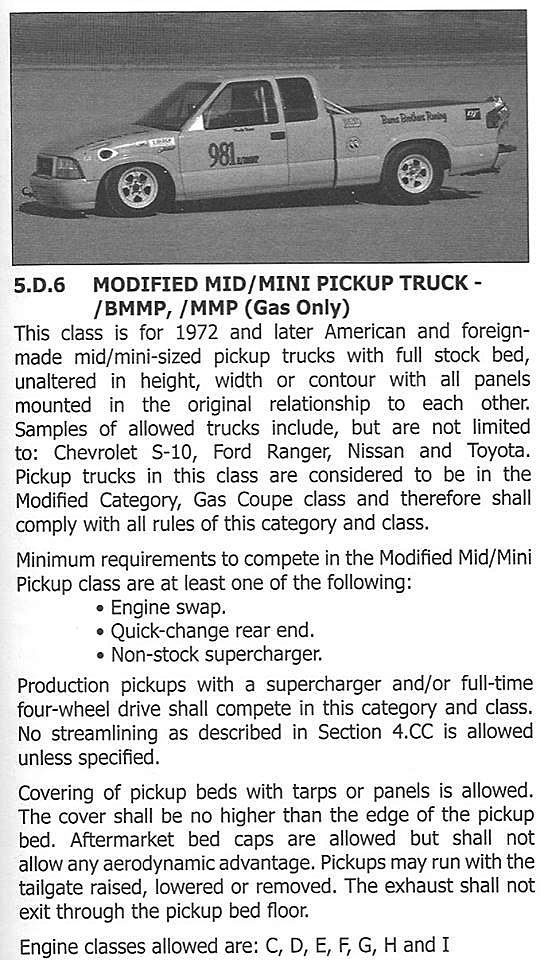 Not surprisingly Charlie's engine builder friend Timmy McMaster, the Y-block Guy, contributed all the machine work, short block assembly and cylinder head work to the project. Charlie and Tim worked out both of the engine combinations together and their diligence has paid off with great results. With Tim's engine building expertise and Charlie hand-fabricating the custom turbocharger system from scratch it was bound to be successful. And with Charlie also constructing an all-new vehicle that is considerably more aerodynamic than his previous '57 Ford pickup it seemed the perfect plan for high speed fun. Tim de-stroked the crank, calculated the rod and piston combination, machined and assembled the short block, and did all the head work including the porting. 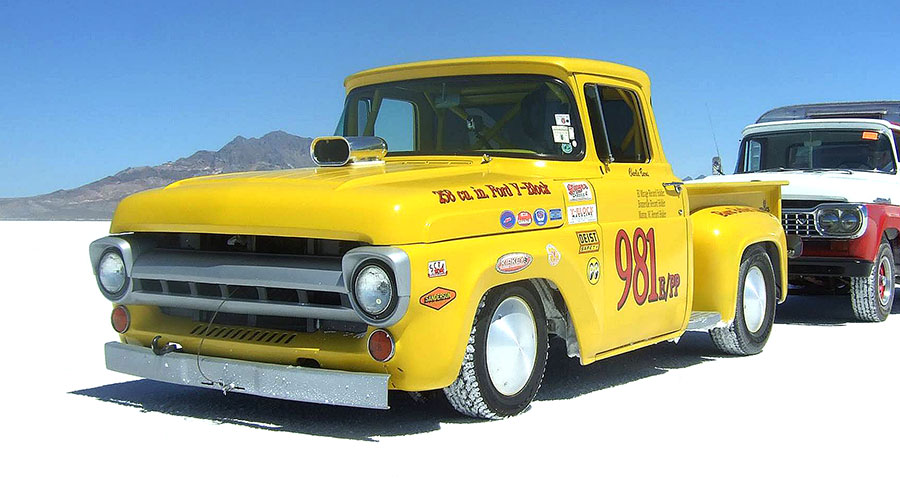 
We asked Charlie about any records set with the normally aspirated 258ci engine in the '57 and he was happy to tell us about them. "In 2008 three records were set. At El Mirage in June, we went 118.894 (still stands today). In September we set the record at Maxton, NC going 120.035 (still stands today because they moved to Ohio a few years later). Earlier that summer, during Bonneville Speedweek, we set the record on the second day at 122.828. Unfortunately, certificates and trophies are only given to the last record set that week and it wasn't us. We did however receive a performance plaque showing our highest run at 124.635. So, we only had the record for about three days. The person whose record we broke, took it back on the last days of the event." 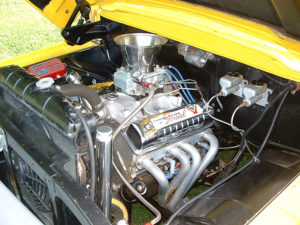 Charlie's '57 pickup is a beautifully crafted but aerodynamically challenged machine. Charlie knew it was only going to go so fast with his favorite y-block powerplant. So the hunt began for a sleeker body for Charlie's forthcoming turbocharged Y-block engine package. The only condition was that it has to be an aerodynamically obliging pickup body. Charlie's lifelong friend Al Crisp found it for him in the form of a 1998 GMC Sonoma pickup with not only a slipperier profile, but a smaller one as well. It's lower and rides lower and comes with a laid back grill and windshield to punch a smaller hole in the air. This particular model is also desirable because the headlights and turn signals wrap around the front as one piece to minimize drag. Just the right thing to let the boosted Y-block do its thing even if its no longer in a Ford body. 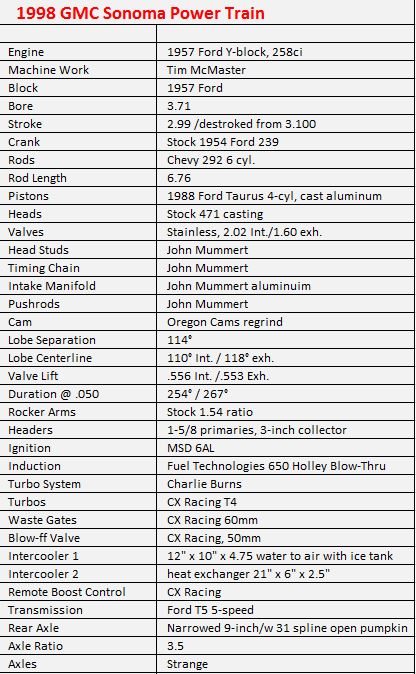 Who says a Y-block doesn't like boost? Cylinder pressure and good parts go hand-in-hand. When they're compatible good things happen. That was the ultimate goal and a more expensive 338ci engine was planned for the new truck. In the interim another smaller engine was called upon for initial shakedown duty. It is a 258ci version originally built for Charlie's '57 pickup.

According to Tim, "The reason to use the parts we did was simple. Cheap! This was not meant to be a turbocharged engine in the first place. It was just going to be N/A in the '57 "yellow brick". It was used in the S-15 only as a testing engine as Charlie didn't want to spend the money on a new 258, the money was better spent on the 338ci "C" motor."
"The choice of Chevy 292 six cylinder rods was because we needed a long rod that would work with the pin height of the .030-over 2.3L HSC Ford Taurus pistons. It's really just one of those low budget things where I looked through catalogs and spec sheets to see what combo would work, nothing "high tech."
Note! It's what hot rodders do. With thousands of different engines out there, rodders know that it is often less expensive and more expedient to combine workable pieces from different engines to get the most desirable combination. They saved a ton of money to get what they needed from stock parts that are up to the job. Charlie says that except for the intake manifold and carburetor, there are no aftermarket performance parts in the 258ci engine.
"The Y-Block has a tall deck for it's size (9.76" CL to deck) so you either need a long rod or a tall pin height to work with a short stroke. I feel the pin height is almost too high as it is so long a rod at 6.7-inches. We put this 258ci engine together for less than $1000 not including my time, so for it to go out and set three records I think is pretty good. When the engine went into the S-15 with a turbo the CR needed to be brought down a bit so I put together a set of 471 open chamber heads to accomplish this. The heads will just swap right over to the 338ci motor when the time comes."
The 338ci engine is the piece they hope will put Charlie's truck over 200 mph at Bonneville next August. It is basically a new short block with good parts and it will accept the heads and Charlie's hand-built turbo induction system from the 258 engine. Timmy stroked the steel truck crank from 3.3 to 3.58 inches and sized the crank pins to accept the narrow NASCAR style Honda rod bearings. While the 258 was built entirely on the cheap with off-the-shelf stock parts except for the intake manifold, the 338 steps up with some custom rods and pistons and Tim's magical knack for manipulating Y-block cranks and blocks to suit their ultimate high speed purpose.
Stepping up to the turbo system presented a unique challenge that Charlie readily undertook. He studied it from every angle and consulted turbocharger books for the right information. He had several other goals in mind besides building a well matched and properly sized turbo setup that would help convert Bonneville's limited atmospheric density into something more useful. He also took great pains to engineer the system to fit entirely under the stock hood with no bumps or bulges. No turbo kit could have accomplished this. It had to be custom from the get go. Accessibility was also a key concern. He wanted to be able to change spark plugs easily and perform normal tuning chores without disassembling the top half of the engine for access. He did all the layout and fabrication work himself to make certain it met his needs. While Tim contributed handily to the project, the heart and soul of this vehicle is all Charlie with countless hours of study, brainstorming and the hard labor of cutting, fitting and welding the entire system together and then doing the same with the rest of the new truck which presented an even larger and more challenging task.

Like many of you Charlie built the entire truck himself in his home garage. The final photo gallery shows how he converted the swoopy Sonoma into a bad machine that's more than capable of challenging the existing 177 mph record in the C/Blown Modified Mini Pickup class. The E record for the 258 is also open so he could have a shot at that one too. But Charlie has his heart set on that 200 MPH club red hat and he's working his way up there. Charlie drives and does all the tuning himself so he's a bit of a one man band in that regard. But he's pretty much mastered everything it takes to make his truck fast and reliable and we suspect he will meet with good results come August 2016.

Besides the turbo fabrication, undertaking the truck construction (see above) was a massive task for one man in a home garage, but Charlie powered his way through it. He removed the body completely to construct the roll cage and make the necessary chassis mods. In the few photos we have put up here you can see how meticulously he crafted everything on the vehicle. While they seem simple on the surface, there are many sub-systems and support components required to make them function at peak efficiency. That include auxiliary cooling, pumps, tanks, fuel systems, wiring, electronics, safety equipment and a host of other components that all have to function in harmony.

To build a vehicle like this by yourself is stout testimony to Charlie's perseverance and high level hot rodding skills. But humility is also part of his vocabulary and he is quick to point out that the project also benefited greatly from input and assistance readily supplied by many friends who offered encouragement, suggestions, an occasional part here and there and the overall contribution that networking among like-minded people provides. He is quick to point out how grateful he is to all of them. And like many racers that have the assistance and unwavering support of various family members Charlie also honors his now deceased brother Gary, a wounded Vietnam veteran who was always a firm supporter and equal partner of the Burns Brothers Racing Team. Gary is on board for every pass and no doubt helps Charlie do his best.

Charlie is a member of the Gold Coast Roadsters and Racing Club and he is proud to represent his club when he races. The clubs are an important cornerstone of the racing culture; providing camaraderie, resources, advice and friendly competition. They also provide the all volunteer force that stages and conducts all the Dry Lakes racing events. The Gold Coast Roadsters and Racing Club hosts the annual Gas Up party at the Mendenhall's Museum where eligible Dry Lakes and Bonneville racers are inducted into the Dry Lakes Hall of Fame. The Gas Up has become a "Must go" event for all the racers. 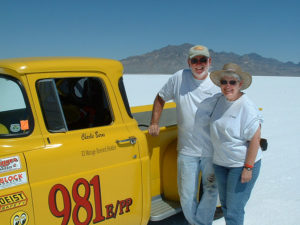 Perhaps the best part is that Charlie is having a blast with his projects. He put his time in and earned his retirement. Now he's doing exactly what he enjoys including spending lots of quality time with Corene taking extended bicycle trips together. Its a fun pace and unlike drag racing, you don't have to be ready every week. There's time to breathe and enjoy working on your hardware. Another satisfying feather in his cap is the recent invitation to display his truck in the Quest for Speed Bonneville and Dry Lakes racing exhibit building at the 2016 Grand National Roadster Show in Pomona California (January 29-31). By all accounts we'd have to say that Charlie is living the hot rodders dream wrenching and racing. The only way it gets any better is when that bright red 2-Club hat is earned.