Why is the Speed Demon So Damned Fast? 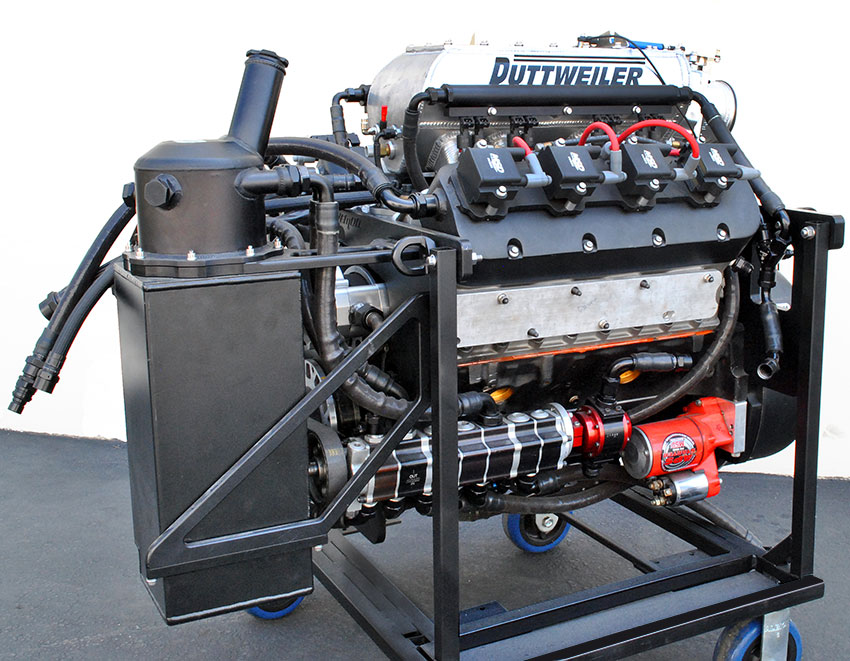 What makes George Poteet's awesome Speed Demon streamliner consistently able to crack off seemingly effortless 400 mph plus runs on the Bonneville salt flats?  Among the contributing factors for the car's stunning performance its sleek aerodynamic profile, traction control and Poteet's nerves-of-steel driving skills rank high on the list. But the primary component of the Demon's potent high-velocity formula is a nasty trio of highly boosted twin turbocharged small block Chevy V8s ensuring that the original generation one small block Chevy is still the fastest V8 engine on the planet. 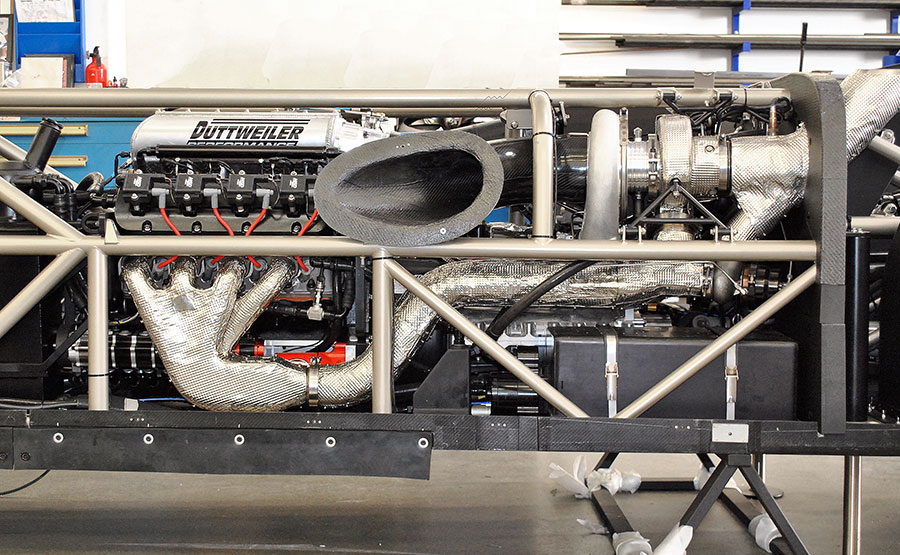 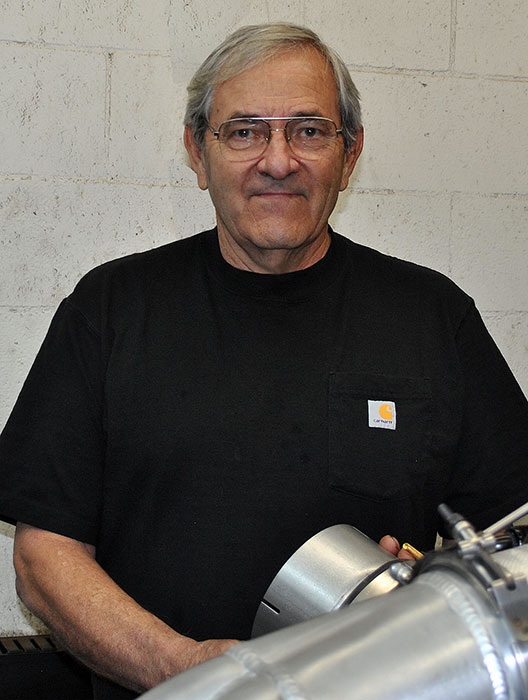 The talent behind the Speed Demon's remarkable powerplants is of course Kenny Duttweiler; one of the most respected and sought after engine builder's in modern racing circles. And the obvious first question for Kenny is, "Why a small block and not a bigger engine?" It's because the small blocks are not as torquey as a big block and they don't overpower the tires which is a critical concern on the salt racing surface. With the aid of dedicated engine management, boost regulation and traction control by M0TeC it is much easier to match the small block's power output to the tire's ability to grip the track. This is reinforced by noting that the fastest 462 mph pass was actually achieved with a 347ci engine and the smaller 300ci engine has run as fast as 446 mph. 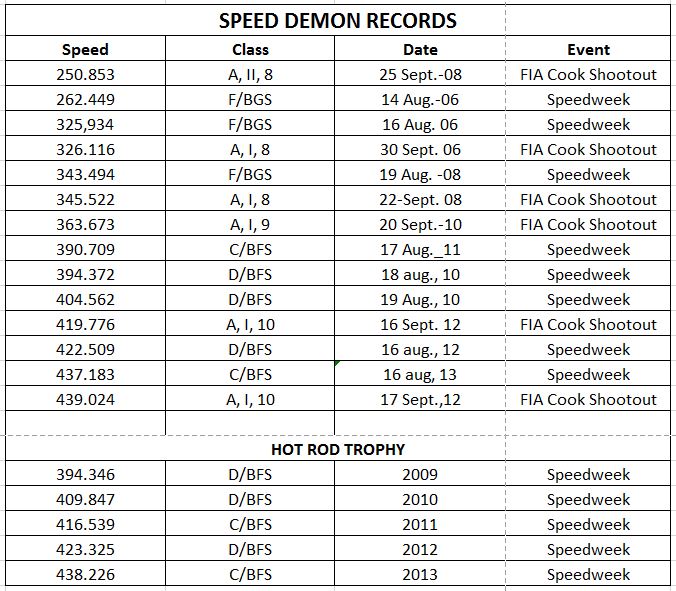 According to Kenny the short blocks are nothing trick although they feature fully coated and gas ported Diamond Pistons, Crower rods and Crower cranks to complement the robust cylinder blocks. The 300ci crank is forged and the other two engines use billet cranks. The engines required some creative internal mods to ensure clearance between the camshaft and rotating assembly. The roller bearings are too wide on the center journals so a combination of roller and LS1 babbit cam bearings are used. The accompanying photo shows one of the Diamond pistons after 74 dyno pulls and the one run where the car crashed in 2014.

Robust fully skirted and hard anodized Diamond pistons with heavily reinforced pin bosses in the photos above stand up well to high boost application and potential detonation. The pistons use .043 Total Seal Gapless rings and the compression ring is over .350 down from the piston deck to keep it farther away from high combustion temperatures.  The piston pins are DLC coated for maximum durability under high loading and the piston skirts exhibit virtually no wear or scuffing after all that hard running. A Crower forged crankshaft and forged Crower I-beam connecting rods complete the rotating assembly. Duttweiler specifies the Crower pieces because he feels they are the toughest parts available to withstand the high cylinder pressures associated with this application. Note the rod bearing looks nearly new after that repeated hard running. 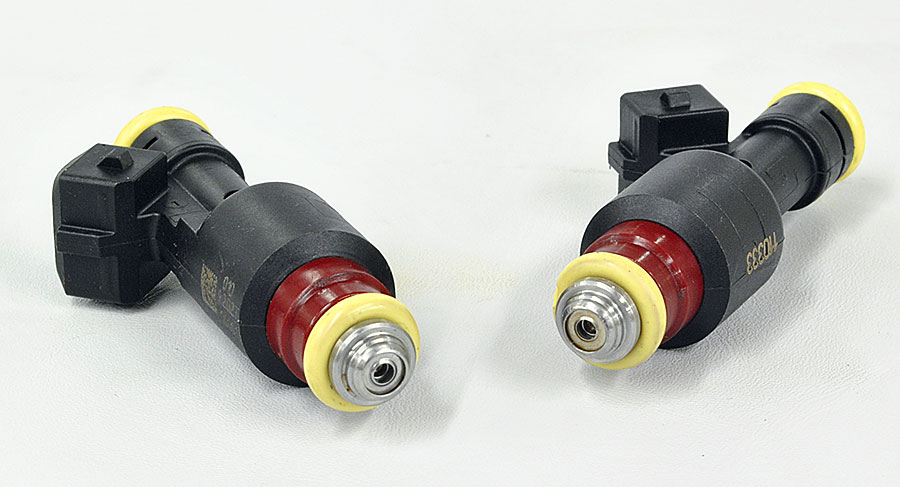 To accommodate the massive amount of fuel required at maximum boost Duttweiler incorporates a pair of 225 lb/hr. Seimens fuel injectors in each intake runner and adds a MoTeC controlled mechanical injector for supplemental fueling.

Each Hogan intake manifold is custom sized to accommodate the engine's displacement. Runner inlets are round and radiused and there is no port taper except for the transition to oval port to match the cylinder head as this is a boosted application. The intake manifold seen here is on the 300 cubic inch D/Fuel Streamliner engine. The blue cylindrical mechanism is the throttle position sensor. Kenny maintains there is nothing overtly trick about these engines other than building them for extreme durability. Boost, electronic engine management and traction control do all the work.

Dart Iron Eagle blocks with standard small block fastener placement, ARP custom aged 625 head studs and SCE copper head gaskets holds the 40+ pounds of boost without distress. One of the blocks, the 388 is a CGI block (compacted graphite iron) with harder material.  Braided line in the lifter gallery  ensures full oil pressure to the rear main. Note guided lifters with offsets for  optimum pushrod placement. Kenny keeps the cam specs confidential, but he says they are smooth profile COMP roller grinds and the smallest engine has the biggest cam.

A custom aluminum dry sump pan and scavenge system incorporates six scavenge stages, four in the oil pan, one from the back of the lifter gallery and one from the turbos. The high pressure fuel pump is attached to and driven off the rear of the oil pump.  A total of six dry sump stages plus the fuel pump are driven by the lone Gilmer belt on the front. A 14 quart Patterson dry sump supply reservoir tank mounts directly to the bulkhead in front of the accessory drive assemblies. A high capacity 16 volt alternator is also fitted on the opposite side of the engine to ensure full battery voltage to run all the electronics and electrically operated components. The engine makes plenty of power to overcome the drag of these necessary components. Duttweiler also uses a specially built crank trigger wheel with 12 flying magnets to provide much greater resolution of crank position.

Custom stainless headers by Dave Diviak route exhaust gasses to a pair of 88mm Precision Turbo turbochargers positioned to accept direct air fed from tapered carbon fiber openings in the side of the body. The turbos are rigidly mounted and the entire exhaust system is wrapped in high temperature ATP heat shielding to both retain heat for the turbos and protect adjacent components from heat overload. 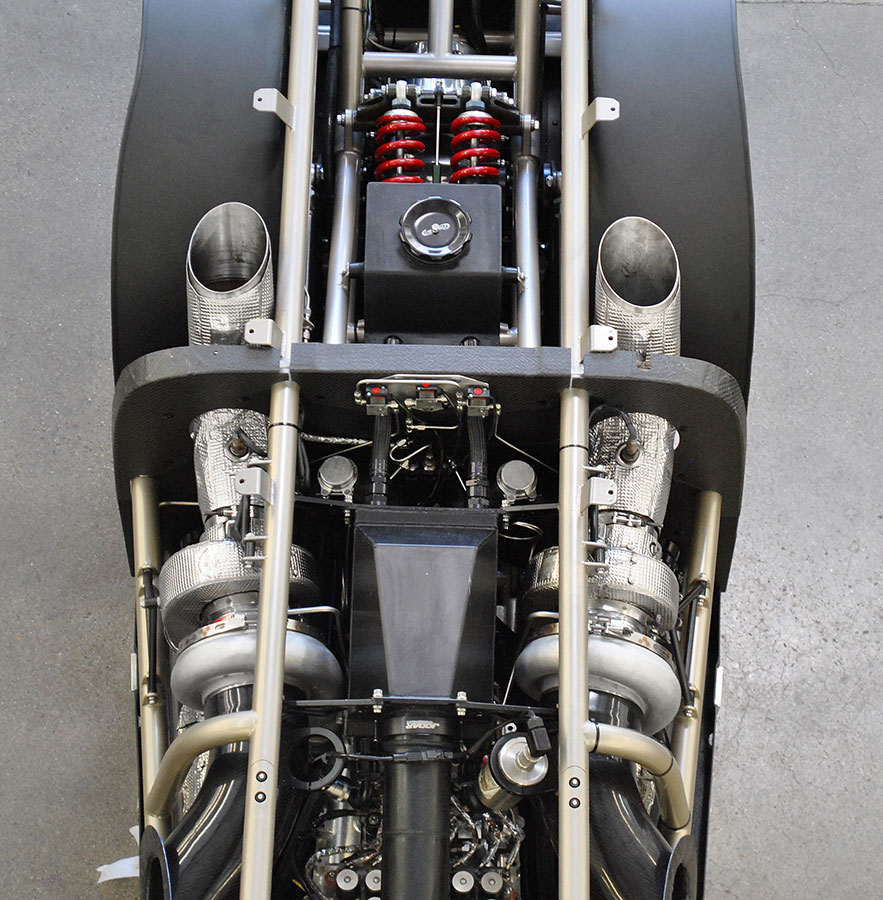 Post crash CFD analysis of the original Speed Demon body design determined the previous overhead scoop to be wholly ineffective as air coming off the canopy went right over the top of it.  Duttweiler confirmed this, having measured virtually no pressure inside the scoop. Hence the new side inlets located at a point on the body where there is a slight positive pressure and a more direct path to the turbos. The exhaust turbine outlets are cut off flush with the body and surrounded by stainless plates to shield the body work.

These photos are a sampling from the forthcoming Speed Demon book detailing its history and the construction of the all new Speed Demon in 2015. Due to unfavorable weather in 2015 the new car was unable to achieve any testing. Its first runs will take place in July or August of 2016. The book will be completed as soon as that takes place and should be available near the end of 2016. When available it will be well publicized.  _John Baechtel

You can also view a follow up story about the Speed Demon wind tunnel test at the following link.